She lives in Nashville, Tenn.; and is the regional advisor for the Midsouth chapter of SCBWI and a co-organizer of the SCBWI Bologna Book Fair.

Her illustrated books include Papa Fish’s Lullaby by Patricia Hubbell (Cooper Square, 2007) and My Love for You is the Sun by Julie Hedlund (Little Bahalia, 2014). Her latest picture book, Poppy’s Best Paper, was released by Charlesbridge in July 2015.

She loves to travel and has used the opportunity to do school visits anywhere in the world from Taiwan to Alabama to Hong Kong and Brazil.

Hi Susan! Thanks for participating in the 2016 SCBWI Bologna Book Fair interview series.


With much more focus on diversity in children’s books than has been in the past, how important of a role do you think book fairs like Bologna play in introducing young readers to children from other countries and cultures?

I think that book fairs like Bologna offer hope and understanding for our future. It creates the opportunity to come together from all over the world and find common ground in stories.

Children can only benefit from books translated into their native language to both learn about new cultures or to find that other cultures are very much like their own. With this experience, they see that kids from all over have similar feelings and experiences.

Any tips for new visitors to the Bologna Children’s Book Fair?

First of all, the SCBWI booth is your hub, and home away from home. You’ll be surrounded by friends you’ve never met before. To maximize your opportunities:

Getting Around: Being the worrier that I am…I like to figure out where I am going via Google Maps the day before I need to be somewhere.

Since wi-fi is not always available on the streets, I take a screen shot of the map I need when I am connected, and can then access it through my phone or iPad photos whether I am connected or not.

Get city and bus maps at Tourist Info in the Neptune Fountain Piazza. Buy bus tickets there or at the Tabachi (the little kiosk).

Budget Tips: Have breakfast bars with you at all times. There are food stands at the Fair, but they are pricey and packed, and often a breakfast bar will get you though the day. Then you can splurge a bit on the dinner meal.

Some lodging comes with a modest breakfast, but if you have the option of declining breakfast for a price break, do so. You can generally get a cappuccino for much less and chomp on your breakfast bar.

If you have an apartment, buy groceries and make lunches, even some dinners.

But do eat out when you can. This is Italy! Home of spectacular food. Share a room, a taxi, a bottle of wine.

Do keep all receipts, again, remember this is a business trip.

Those are some great tips. You really are a pro. You’ve done a lot of traveling over the years, China, Italy, and Brazil. As an illustrator, how does seeing different cultures influence you?

I love getting a peek at different cultures when I travel, and specifically I love visiting the schools. One of the things that strikes me most, is how universal kids reactions and questions are.

I have had the same questions from kids in Hong Kong as I’ve had in Brazil. (“How long does it take you? Why clay? How much money do you make?”)

Kids’ artwork and enthusiasm are so similar in every culture I have seen. And since so much of my presentations are visual, language does not impose a huge barrier.

In 2015, you officially stepped onto the writing side of picture books with the release of Poppy’s Best Paper. First off, congratulations! And secondly, what particular challenge surprised you when you took off your illustrator’s hat and switched it for an author’s hat? 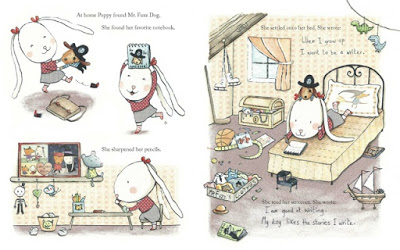 Thank you! I have lots of memories and ideas from my childhood.

I began writing because most art directors told me that my clay artwork was a tough fit for other people’s manuscripts and that I should come up with my own stories.

As I began to write, the stories that unfolded were more complex than suited my illustration style, and the irony is that my own manuscript of Poppy’s Best Paper was not a good fit for the clay!

I tried to illustrate Poppy in clay many times, until finally my agent intervened with the suggestion of using another illustrator.

Brilliant! Rosalinde Bonnet‘s illustrations made all the difference in the world.

Sometimes a fresh perspective is exactly what the project needs. So glad that worked out.

I’m just fascinated by your illustration method of first drawing an outline then filling it in with clay. Do you see the image with color before you begin or is that something that changes as the page progresses?

I start with a color palette that interests me, then I explore it further in the computer or with colored pencil, working on top of copies of my original sketch. Often colors are changed a bit in the clay stage, but I try to have the colors worked out before I mix them in clay. 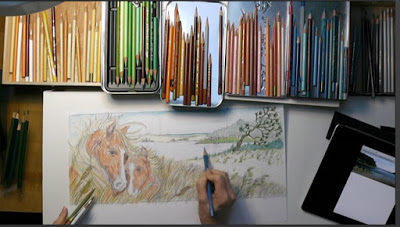 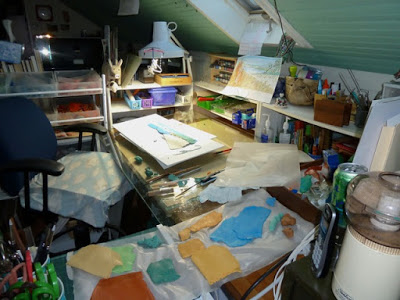 I can imagine mistakes can be costly. After your artwork has been published in a book, how do you preserve it and are you allowed to sell it?


I save my artwork in pizza boxes and other flat boxes and have my studio knee wall space filled with them. The sad thing is that if I am using plasticine, it is not a permanent medium and they can never displayed in any way but on a tabletop under glass. 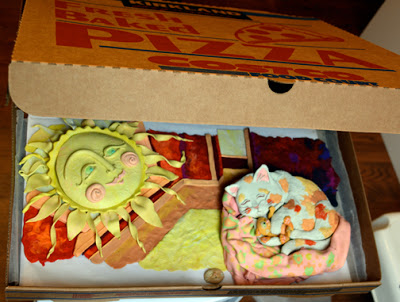 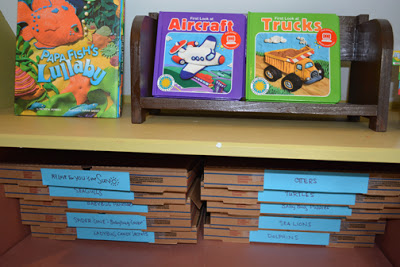 Pizza boxes. I love it! What question have you never been asked on an interview or school visit, but wish to be?

Hmmmm…. How old do you feel, or rather, what is your mental age?

I think ten years old is the age I identify with most. I still think like a ten year old. I’m forever trying to figure the world out and gain experiences by feeling my way through while keeping that sense of wonder. I rarely feel like an expert, but in a way that feeds the creativity.

That’s actually why I enjoy clay so much, because I don’t know how to do it! Every illustration becomes a discovery process. With lots of skills, ten year olds are still trying to do things in their own way with exuberance and angst, and most are not yet jaded.

Ten is my favorite age, too. And finally, what are you working on now? Any surprises you can share with us?

I am thrilled to say that my editor and I are working on a new Poppy book! In this second book, Poppy faces sibling rivalry with not one but two adorable additions to the family.

We’ll see if Poppy can learn to share the limelight!

Congratulations! Can’t wait to find out. Thank you so much for stopping by, Susan. I wish you a lovely time at the Bologna Children’s Book Fair.