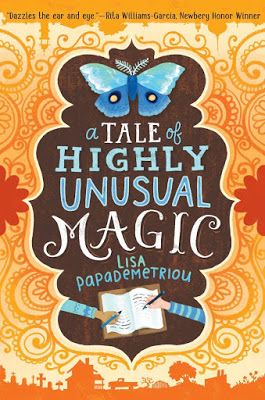 One day, I was at the grocery store with my daughter when I spotted a crazy man in the car beside ours.

Zara was very small, perhaps three years old, she watched while he sat in his car, talking to himself, as I unpacked the groceries.

When I finally sat behind the wheel, I tried to ignore the man, fearing that she would be frightened or concerned.

Instead, she looked at me and explained, “He’s praying.”

When I looked again, I realized that she was right. The man had on a skullcap—he was in his car, praying to Allah. When your religion calls on you to pray five times a day, sometimes the best, most private place is in the car.

My daughter knows that because her grandmother is an observant Muslim, and has prayed in our car on numerous occasions. To Zara, this is perfectly normal. This is the essence of point of view.

Three years ago, I began work on A Tale of Highly Unusual Magic (HarperCollins, 2015). The story is about two girls—one in Texas, one in Pakistan—who each find a copy of a magic book.

Thematically, I was writing about the way in which stories unite us, so the dual setting and protagonists were very important to me. My husband is from Pakistan, and we travel there fairly often. I had been hoping to write the story from the point of view of someone like my daughter, who is very familiar with the culture.

But an
early reader felt that, despite the compelling Pakistani setting, Leila’s point of view simply didn’t feel convincing. This reader told me that I needed to discover the story that was in my own heart. Put another way, I had to find the common ground between Leila’s perspective and my own.

I am a Greek American, but I am far more American than Greek. When I traveled to Greece as an adult, people could tell right away that I was Greek. But when they discovered that I didn’t speak Greek, they were disappointed.

“That is a shame,” a cabdriver in Thessaloniki told me, frowning.

Yet, in the iconography of the Greek churches I visited, I would see faces that looked like mine. In many ways, Greece felt like home to me, but it also felt intensely foreign.

This is also how I exist among my in-laws when I visit Pakistan—they accept me as family. In fact, they sometimes accept me so thoroughly that they forget that I don’t speak Urdu, or know what holiday we are celebrating, or even have any idea what clothes are appropriate for different occasions. To them, these things are all second nature, while for me, they are constant sources of confusion and gaffes. I belong, and yet I don’t.

These were the experiences I drew on when I created Leila’s character in A Tale of Highly Unusual Magic. She is a Pakistani-American girl, but she is far more American than Pakistani. She is trying to navigate the space in which the culture is her heritage, but it is not familiar. Like me, she is an insider-outsider.

Acknowledging my own perspective helped guide me toward the story I could most authentically tell. Happily, a number of reviewers who are also Americans with family outside of the United States have noted that Leila’s story arc feels relatable and familiar.

I started by writing about the ways in which stories can connect us to one another. In writing the story of my heart, I learned how true that is.


The Story Behind the Story: A Tale of Highly Unusual Magic from PixelEdge on Vimeo.

Enter to win one of two signed copies of A Tale of Highly Unusual Magic by Lisa Papademetriou (HarperCollins, 2015), plus a special handwritten letter from a character in the book. Author sponsored. Eligibility: U.S. only.