I worry a lot about vision.

As a forty-something woman (okay, close to fifty), my vision seems to be diminishing on a daily basis. Cheap pairs of Walmart reading glasses are scattered through every room in my house – and still, I can’t seem to find a pair when I need them.

But I worry more about the vision of the next generation. Not their eyesight as much as their ability to see the possibilities in things. Their creative vision. The desire to look around, notice stuff, and wonder about it…

On a recent train ride into New York City, I sat next to a twenty-something woman who checked her iPhone every three minutes without fail. In between, she dozed. But she never once peered through the window next to her seat. Not one single glance.

How could she ignore the outside world so completely, I wondered? How could she be content to miss everything zooming by? Wasn’t she curious about something beyond her tiny screen – the people on the platform, or the bustling neighborhoods, or heck…even the random stray cat on the random gritty windowsill? 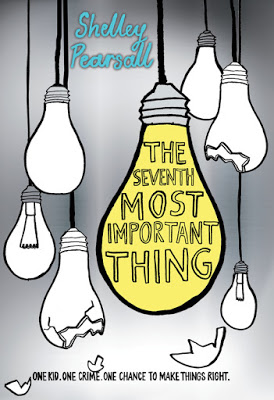 Maybe I’m on this vision kick because I’ve spent so much time lately thinking about the idea and writing about it.

My new novel, The Seventh Most Important Thing (Knopf, 2015) is about the importance of vision…of being able to see the possibilities around us. Written for ages 10 and up, the novel follows the unlikely friendship between an angry, young teen named Arthur Owens, and a solitary trash picker named James Hampton.

Without spoiling too much of the story, I can tell you that James Hampton is a man who truly sees the possibilities in what everyone else overlooks or discards. Vision is vital to his work — things like used light bulbs, foil, coffee cans, and cardboard boxes become something entirely different in his hands.

Since the idea of looking below the surface of things is so central to the story, I designed the plot and the characters as a series of layers too. The deeper that readers delve into those layers, the more surprises there are. What they think they know at the beginning of the book, may be much different than what is true at the end.

Writing the novel has caused me to focus more on “vision” in my work with student readers and writers in schools. On a recent school visit, I held up a silver CD disc and asked the audience what it could be…

“A CD disc” was the first answer.

(It is always the first answer.)

So, here’s my challenge for you today: Put away the technology for a few minutes. Look at an everyday object nearby.

Really notice all the details.

Let your mind roam. Think of all the creative possibilities it could be and give your own “vision” a chance to soar.

Oh, and if you are on a train, at least look out the window and notice the cat…