There’s a line from the first “Jurassic Park” movie to the effect that the place has all the problems of a major theme park and a major zoo.

And in writing a dinosaur time travel novel, I found, to my surprise, that of the two, the more problematic one has been the historical – dinosaur — aspect.

We are seeing new discoveries and new interpretations of dinosaur behavior and evolution almost weekly. In publishing, of course, there can be up to a two-year lead time from a sale of a manuscript to its publication. A lot can happen in that time.

For example, there is a dinosaur called Tsintaosaurus – long thought to have had a single horn coming out of its head like a unicorn. In 2013, however, a study was published that concluded that the “horn” was placed in the wrong position and Tsintaosaurus didn’t resemble a unicorn at all. Any manuscript set for publication that featured the unicorn became instantly outdated.

Sometimes, though, the science is less settled, as in the case of Nanotyrannus. Nanotyrannus is a name that was assigned to a specimen of a dinosaur that resembles Tyrannosaurus rex but is somewhat smaller (Hence “nano”). Although some of the evidence is ambiguous, some recent analyses suggest that Nanotyrannus was just a juvenile T.rex.

(That said, there are new specimens that some paleontologists believe may prove the existence of Nanotyrannus that have yet to be fully examined). 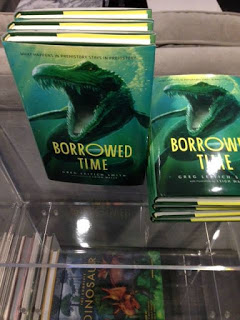 So, what’s an author to do?

Do your research until it hurts. For me, this involves getting as many primary sources as possible. In the case of paleontology, this means journals such as PloS One, Cretaceous Research, and the Journal of Vertebrate Paleontology.

I tend not to trust media reports of new discoveries but sometimes they link to or you can infer a link to the original article. Most articles on the new discoveries will have a recap of past thinking on an issue.

Know your point of view. Chronal Engine (Clarion, 2012) and Borrowed Time (Clarion 2015) both feature a small tyrannosaur the point-of-view protagonist Max calls Nanotyrannus. Max does mention the ambiguity in the naming (because he’s slightly pedantic), but nevertheless continues to call it Nanotyrannus throughout.

Why? Well, first, “Nanotyrannus” is kind of a cool name and continually referring to the animal as “the juvenile T.rex” would’ve been clunky. Also, he didn’t have the wherewithal to perform an analysis of the creature to determine what species it actually was…

Don’t be afraid to make an informed judgment call – in fiction, at least, there’s room for poetic license. And, besides, the science might catch up to you. Both Chronal Engine and Borrowed Time feature a variety of dinosaurs of differing sizes in the dromaeosaur family (These are the “raptor” dinosaurs made familiar by “Jurassic Park”).

In the location and era the book is set, however, the bones of only small raptors have been recovered, although there are some ambiguous teeth believed to be from larger raptors. Consequently, in the books, I feature different-sized species of raptor. And recently, paleontologists announced the discovery of Dakotaraptor, a giant-sized “raptor” dinosaur – somewhat larger than the raptors from “Jurassic Park” — from the same era in which my books are set.

What’s a reader to do?

I tend to be the type of reader who gets annoyed by factual errors. They trip me up and make me less trusting of the author and less willing to suspend disbelief. So here’s my strategy:

Whenever I pick up a book for the first time, I always look at the first publication date (often the copyright date). I had assumed that everyone did this or learned to do this, and was surprised when I was informed this was not so.

But the original date of publication will give you a heads up on the mindset of the author, the era in which he is writing, and what facts are known (or should have been known) to him or her at the time.

For example, Arthur Conan Doyle’s portrayal of sluggish and scaly dinosaurs in The Lost World (published 1912) is very different from the active and intelligent predators in Michael Crichton’s Lost World (1995). But I’m willing to accept Conan Doyle’s portrayal because of the era in which he was writing. (I’m also willing to accept Crichton’s featherless raptors because his book was published prior to the discovery that raptors had feathers).