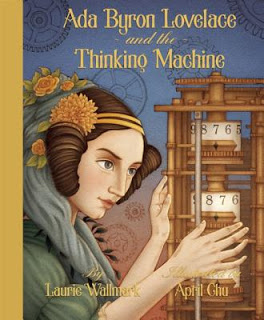 Laurie Wallmark is the first-author of Ada Byron Lovelace and the Thinking Machine (Creston, 2015). From the promotional copy:

Ada Lovelace, the daughter of the famous romantic poet, Lord Byron, develops her creativity through science and math.

When she meets Charles Babbage, the inventor of the first mechanical computer, Ada understands the machine better than anyone else and writes the world’s first computer program in order to demonstrate its capabilities.

Like everyone else, I did many, many revisions before I thought the manuscript ready to submit. In June 2013, I had a manuscript critique at the New Jersey SCBWI conference with Ginger Harris of the Liza Royce Agency. She and her partner, Liza Fleissig, both thought the manuscript showed promise and would be of interest to Marissa Moss of Creston Books.

I did a revision for them, and then they sent it to Creston Books. Marissa like the story enough to send me a revise and resubmit letter—four times!

It was at this point that I began to lose hope. Would she ever think Ada’s story good enough to acquire?

Apparently she would, since at that point, Marissa offered a contract. But the revisions didn’t stop there. I did about ten more before she thought the text was ready to pass on to the illustrator, April Chu.

Of course, not all ten were major revisions, but every word had to be just right, since a picture book has so few of them.

The biggest thing I learned along the way is that no matter how good you think your manuscript is, it can always be made better. The second was a good editor is invaluable.

My biggest advice to other writers is to be open to changes.

No, you don’t have to take every suggestion offered, but you need to seriously consider each one. Remember, this takes time. 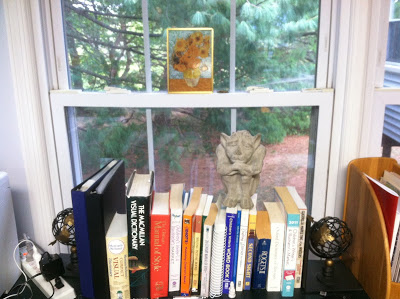 I love STEM (science, technology, engineering, math) and wanted to share this love with young readers—not just with geeks like me, but with all children, no matter how STEM-phobic they may be.

Many children say they hate STEM or worse, they’re bad at it. As a society, we need to turn this perception around. Children are growing up in a high-tech world and need to feel comfortable in it.

But the question for me was, how could I make STEM interesting and fun for children through my writing while avoiding the dreaded “issues” book?

I realized a picture book biography is an ideal medium to introduce STEM concepts and facts to young readers. Instead of only offering STEM content through dry, boring textbooks, teachers could use picture book biographies to immerse children in the subject matter. They could enjoy a story while learning STEM along the way. I think of this as guerilla teaching.

Once I decided I’d write a biography, I had to choose a person to profile. I’m drawn to writing about strong, under-appreciated women in STEM. I feel it’s important for all children, not just girls, to realize the many extraordinary contributions of women in STEM. Ada was the world’s first computer programmer, yet few people have heard of her. And she did this in the 1800s!

In addition to showcasing a woman in STEM, I wanted to portray a person who had faced challenges in her life. Ada suffered from an assortment of health problems. As a child, a case of measles left her blind and paralyzed. Her sight soon returned, but Ada was bedridden for three years.

Many children have challenges of their own to overcome. Seeing how Ada succeeded in spite of her lifelong health problems might help them realize they can too.

When people hear I’ve written a picture book about Ada Byron Lovelace, often their first question is “Who’s that?” It makes me sad to realize most people have never heard of such an important person in STEM. Is this because she was a woman?

Because of Ada’s accomplishments and her overcoming of obstacles, I knew I had to write about her in my first picture book biography.

Additionally, in a previous career, I was a programmer, and I now teach computer science. How could I not write about Ada Byron Lovelace, the world’s first computer programmer? Without a doubt, I had to share her story.

Enter to win one of two signed copies of Ada Byron Lovelace and the Thinking Machine by Laurie Wallmark (Creston, 2015). Author sponsored. Eligibility: U.S. only.

One thought on “New Voice & Giveaway: Laurie Wallmark on Ada Byron Lovelace and the Thinking Machine”