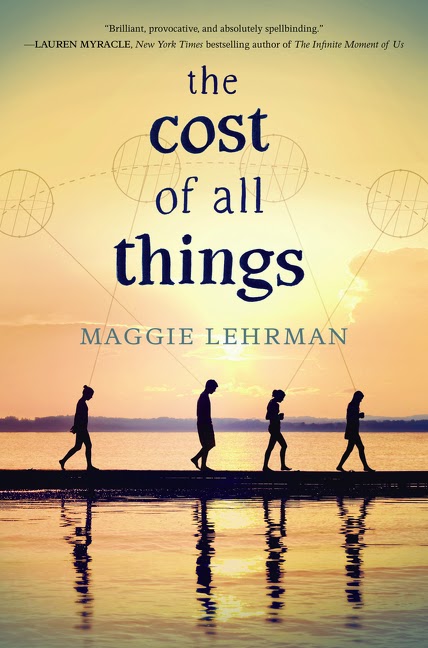 Maggie Lehrman is the first-time author of The Cost of All Things (Balzer + Bray/HarperCollins, 2015). From the promotional copy:

What would you pay to cure your heartbreak?


The right spell can fix anything…


When Ari’s boyfriend Win dies, she gets a spell to erase all memory of him. But spells come at a cost, and this one sets off a chain of events that reveal the hidden — and sometimes dangerous — connections between Ari, her friends, and the boyfriend she can no longer remember.


Told from four different points of view, this original and affecting novel weaves past and present in a suspenseful narrative that unveils the truth behind a terrible tragedy. Part love story, part mystery, part high-stakes drama, The Cost of All Things is the debut of an extraordinary new talent.

When I started writing The Cost of All Things (way before it had a title, even), the only thing I knew was that Ari had chosen to forget her boyfriend Win, who had died. I wrote nearly a hundred pages from just her point of view as she attempted to navigate the world without part of her memory.

Then I started my final semester at Vermont College of Fine Arts with Tim Wynne-Jones as my advisor.

Tim took a look at this 100 pages and got very concerned. How could I convey anything about Win, about Ari herself, if she doesn’t actually remember him? How is the reader supposed to understand this world or connect to the characters?

I knew Tim was right, but I didn’t know what to do about it. Switch to an omniscient third person? Start the story earlier?

So I put the story aside for a year as I worked on other things, and when I came back to it, I started thinking about the other people in this world, and how they would be affected by Win’s death.

Partly just for me, I wrote in other voices, basically starting the story over from the beginning. And as the other characters’ wants and needs came into focus, I knew their stories were an important part of Ari’s, even though she might not know it (yet). The interconnectedness of these characters became a driving force of the book. How does one person’s actions affect the others? What do they uncover, the closer they get?

At an early point, there were as many as seven or eight points of view. But I fairly quickly narrowed it down to the four in the book: Ari, Markos, Kay, and Win, all in first person.

I couldn’t do exactly that, as these four stories were meant to ping off of each other and loop around, but I did find myself going on a run of three-to-four Markos chapters in a row, and then catching up with a handful of Ari or Kay chapters, and then a whole mess of Win scenes. (Win was easier to write straight through because his chapters were all, by necessity, flashbacks.)

This meant I had a big jumble of scenes and plots in no particular order, which led to a lot of sorting and finessing after the first couple of drafts. Hence the Big Plot Wall, or what was affectionately known in my apartment as the Serial Killer Wall, named after the obsessive charts you see on TV in the homes of serial killers and those who hunt them.

Each of the four characters’ stories are so personal, and they’re each so blinded by their own perspective (at least in the beginning) that first person always made the most sense to me. They deal with pain in different ways, which I found I could express in first directly — as well as show how much of the story was about who knew what secrets when.

My glimpse of this world began very small, with Ari and the spell she chose to take to forget Win.

I like to understand the characters before I do any larger-scale thinking about themes, or I can get bogged down with expressing ideas instead of exploring human behavior.

I completely understood why one girl would choose to eliminate the source of her pain — isn’t there something we all wish we could forget? — and that moment of empathy made me want to know more about Ari and what happened to her. And so I had to dig in to the glimpse and expand it beyond Ari.

If Ari can take this spell, what else is true about this world? How does the magic work? What are its costs?

Once I started thinking about those questions — how spells were made and taken and paid for, what the consequences would be, who took spells and why — I started to see the types of parallels you could make to the real world: spells were shortcuts, a way to avoid moments or situations that might be difficult or painful. They gave you what you wanted, but what you wanted isn’t always what you needed. There were parallels to performance-enhancing and recreational drugs, cheating, plastic surgery, and more.

This is not to say that using spells was always a bad idea; like in the real world with medical decisions or pain relievers or other important means of self-care, sometimes a spell could be a healthy choice. Hekame (what I called the practice of magic in this world) wasn’t good or bad on its own, but could be used for good or bad based on the decisions of the characters. And it always has consequences.

As a side note, for a fascinating and very different way of looking at some of the same questions, especially when it comes to memory, I’d check out the excellent More Happy Than Not by Adam Silvera (Soho Teen, 2015). Part of the reason I love fantasy/science fiction (as it is in Adam’s case) is that writers can answer similar questions in totally different ways.

I’ve always been fascinated by the way fantasy heightens and reflects the real world. Ursula K. LeGuin said that fantasy stories “work the way music does: they short-circuit verbal reasoning, and go straight to the thoughts that lie too deep to utter.”

Hekame was a way for me to talk about choices and consequences, things we in the real world have to face constantly, without having to name each of the parallels. There’s room for the reader to fill in their own experience and intuition.

Enter to win a signed copy of The Cost of All Things by Maggie Lehrman (Balzer + Bray/HarperCollins, 2015). Author sponsored. Eligibility: continental U.S.

One thought on “New Voice & Giveaway: Maggie Lehrman on The Cost of All Things”