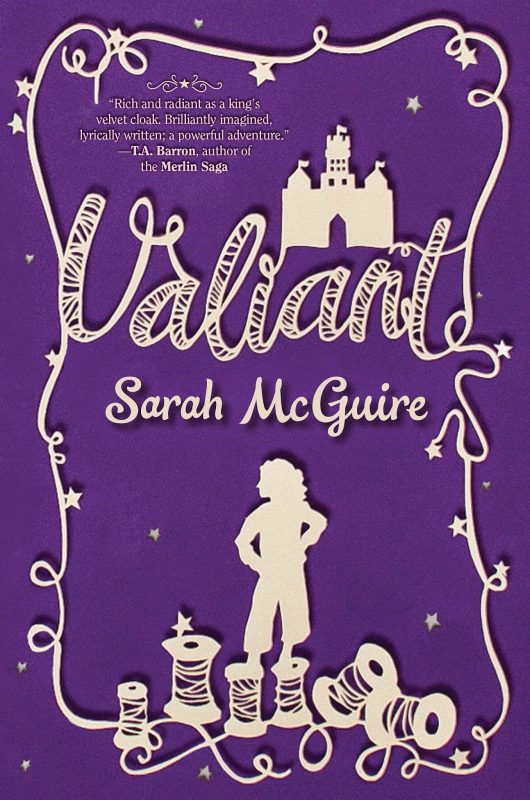 Sarah McGuire is the first-time author of Valiant (Egmont/Lerner, 2015). From the promotional copy:

Reggen still sings about the champion, the brave tailor. This is the story that is true.


Saville despises the velvets and silks that her father prizes far more than he’s ever loved her. Yet when he’s struck ill she’ll do anything to survive–even dressing as a boy and begging a commission to sew for the king.


But piecing together a fine coat is far simpler than unknotting court gossip about an army of giants, led by a man who cannot be defeated, marching toward Reggen to seize the throne. Saville knows giants are just stories, and no man is immortal.


Then she meets them, two scouts as tall as trees. After she tricks them into leaving, tales of the daring tailor’s triumph quickly spin into impossible feats of giant-slaying. And stories won’t deter the Duke and his larger-than-life army.


Now only a courageous and clever tailor girl can see beyond the rumors to save the kingdom again.


Perfect for fans of Shannon Hale and Gail Carson Levine, Valiant richly reimagines “The Brave Little Tailor,” transforming it into a story of understanding, identity, and fighting to protect those you love most.

I think it came in stages for me. I was one of the lucky writers included in the Nevada SCBWI Mentor Program. Harold Underdown chose me as one of his mentees, and for six months, we worked though my novel. I think my biggest takeaway was tackling the middle of the novel and keeping it from sagging.

Even though I had to slide that novel, under the metaphorical bed, I had a much better understanding of story structure. And I used it in Valiant, making sure I had a tent pole of tension to hold up the center of the story.

My next jump was in a Highlights Workshop with Patti Gauch. She taught (among other things) about going far enough emotionally, about reaching a transcendent moment of fear or hope or joy. She taught me to watch for those places in the story that already meant something to me. I learned to circle back to those places and dive into the emotion of that moment.

I think as writers, we’re afraid of our emotion in a scene seeming cheesy or overwrought. And from that place of fear, we keep our emotion on a tight rein. I would have said I was being subtle, but the truth was that I was scared– scared of purple prose and people laughing at over the top scenes. When I was afraid, and didn’t go far enough, my writing came across as insincere or insubstantial.

And … here’s the secret: it was. I was too scared to reveal the substance of that emotion. I was too afraid to be truly sincere. My fear of emotional triviality actually made my writing trivial.

But now I’m all better.

Of course, I still work at this. And I still don’t get it right the first or second draft. Or the third. And when I do finally go far enough, I have to loop back a few days later to trim and shape and make sure there’s nothing in the writing of that moment that would keep a reader from going far enough. But I’m getting better at it. And knowing when I don’t go far enough is half the battle, right?

I found that stories and math (among other things!) shaped Valiant’s world.

Let’s start with stories. When we think of world building, we often think of government, architecture, all the minute details of daily life. But we forget that we view our own world through the lens of story.

For instance, going off to pursue a dream is most mostly viewed as proper independence in America. In our stories and movies, it’s often rewarded. But in other cultures, such independence might be viewed as destructive and selfish.

Anyway, once I realized I’d be writing a story about giants, I knew wanted to work within the stories we all know about giants–even if we don’t think we know them. So I did an informal survey of Western myth, folk and fairy tales. Whether it was a titan of Greek mythology or the giant who ground bones to bake bread, giants were brutes who could only be overcome by some form of trickery.

(I found one story of a smart giantess: Oona, the wife of Finn MacCoul. But she defeats another giant through (you guessed it!) trickery. The only story I could find in which someone beat a giant through a straightforward attack was David and Goliath.)

So I had stories where giants were 1) the enemy, 2) stupid, and 3) sometimes ate humans. It seemed only right that the humans in my novel would have similar stories (and thus views) of giants.

But things got interesting when I looked back through that same story-lens. Given those stories, how would giants view humans? As unreliable tricksters who used their wits to overcome and kill giants.

So within the giantish world, the most powerful giant might not always be the strongest, but the one who couldn’t be fooled.

For me, that was when things got interesting. So I wrote Valiant with the idea that I had two cultures with the same set of stories, but who viewed those stories from two very different perspectives.

I also used math to build my world. (Such a whiplash-inducing change from stories, isn’t it? But bear with me.) I was thinking about volume.

So–and this is an oversimplification– if a giant was six times as big as a human, he could weigh roughly 200 times more. And he’d need a lot more food than six humans.

Where might giants living in the stony Belmor Moutains find food? And how could they travel the great distance they did in Valiant? I discovered some of my favorite details about the world of the uten by exploring that. What started as mathematical ended with one of my favorite scenes.