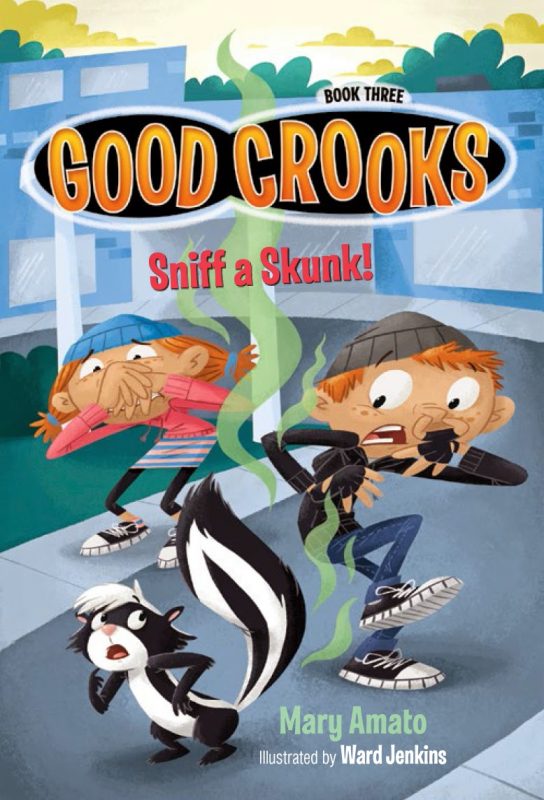 What if a brother and sister had parents who were raising them to be crooks? And what if the kids wanted to say goodbye to their life of crime and become…good?

Mom and Dad would be horrified if they found out! The kids would have to do their good deeds in secret!

As soon as I came up with this idea for a chapter book series, I couldn’t wait to get cracking. After much scheming and some critical feedback from my editor, I figured out the voice and overall structure and decided to call the series: The Good Crooks Books (Egmont). My editor loved it and wanted to nab an illustrator right away.

Lots of editors and publishers dislike author involvement in finding or choosing an illustrator. Since publishers are the ones paying for the book to be produced, they are definitely in the driver’s seat. In my case, I had a long-term relationship with my editor, and so she kindly asked if I wanted to give any suggestions for illustrators or for styles of illustration.

As if on cue, I had just received the monthly magazine from my professional organization, the Society of Children’s Book Writers and Illustrators.

The cover was illustrated by a guy named Ward Jenkins. I was drawn to the art and impressed by what the artist had to say about his process in the profile.

I checked out Jenkins’s website. The multitude of characters in his viewable sketchbooks gave me the ability to spy on his range as well as spot characters that I could imagine sneaking onto the pages of The Good Crooks Books.

Quickly I emailed my editor: I think Ward Jenkins could pull off this job!

The editor and her team looked at Ward’s work (as well as other illustrators). They sent him my draft to read and asked him to draw a few quick sketches.

While I put finishing touches on the manuscripts for the first two books in the series, Jenkins drew sketches for the covers and for the spot illustrations inside.

Just as I had to revise my writing, Jenkins had to revise his sketches, based on feedback from the publishing team—and from me, too. This is not common. Often, authors are not given the chance to see sketches for fear that they will be too picky. It’s kind of like the “too many cooks in the kitchen” rule. Authors can make the process difficult by being unrealistic or demanding.

If given the chance to see art, I try to keep my comments focused on whether or not the images are accurate. Sometimes, an illustrator will forget an element or a fact in the text and then create an illustration that does not match what’s happening. For example, if the author says the kids are wearing hats and carrying flashlights and then the illustrator shows them bare-headed and bare-handed, the reader will sense, even on a subconscious level, that the picture isn’t true to the book. Big inaccuracies do happen, and they can be distracting to the reader.

Thankfully, Ward did a great job and any little glitches we did find were corrected. I loved seeing his illustrations progress from sketches to final art. He captures such a range of facial expressions and body language. And, he has a fantastic sense of humor!

Now, both Ward and I have the great thrill of seeing Good Crooks stealing spots on the shelves of bookstores and libraries.

Mary Amato is the author of fifteen books for children and young adults. Her latest: Good Crooks Book Three: Sniff a Skunk! (Egmont, 2015) is the third in The Good Crooks series.

Ward Jenkins is an illustrator and animator.