“She radiated loveliness, both personally and in her work. She was a gifted and creative artist, author, illustrator, and print maker, active both locally and overseas in exhibitions and galleries.”

“‘Bonnie was an extraordinary human being, full of laughter, wit, and playfulness,’ recounts [author Leda] Schubert. ‘To create one realistic illustration, she made borscht and threw it hither and yon, taking photos as she did so. Borscht stains pretty much anything it touches, so I’m sorry I didn’t get to see her kitchen afterwards.’” See also The Princess of Borscht (Roaring Brook, 2011).

“Of her more than 20 titles, the most acclaimed was Woodie Guthrie: Poet of the People (Alfred A. Knopf), whose images Booklist described as ‘sinewy and emotionally compelling.’ It won the Horn Book – Boston Globe Honor Award and was named a Publishers Weekly’s Best Book of 2001 and a New York Times Notable Book.” 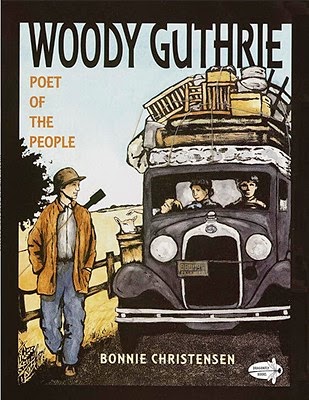 Though we just missed teaching together there, Bonnie and I are both counted among members of the Vermont College of Fine Arts family.

She died in the midst of our winter 2015 residency and, consequently, we mourned her passing and celebrated her life and legacy with stories and the music of Elvis Presley. She is dearly missed.

My sympathies to her family, friends, colleagues, students and young readers.

I first connected with Bonnie through an anthology, In My Grandmother’s House: Award-Winning Authors Tell Stories About Their Grandmothers (HarperCollins, 2005). She illustrated the book with drawings from photographs of the featured grandmothers, including my own Grandma Dorothy.

The emotional power of Bonnie’s work far exceeded that of the inspirational photo and captures my grandmother at her spirited best. Bonnie gave the illustration to me, and it’s one of my most precious personal touchstones.

2 thoughts on “In Memory: Bonnie Christensen”