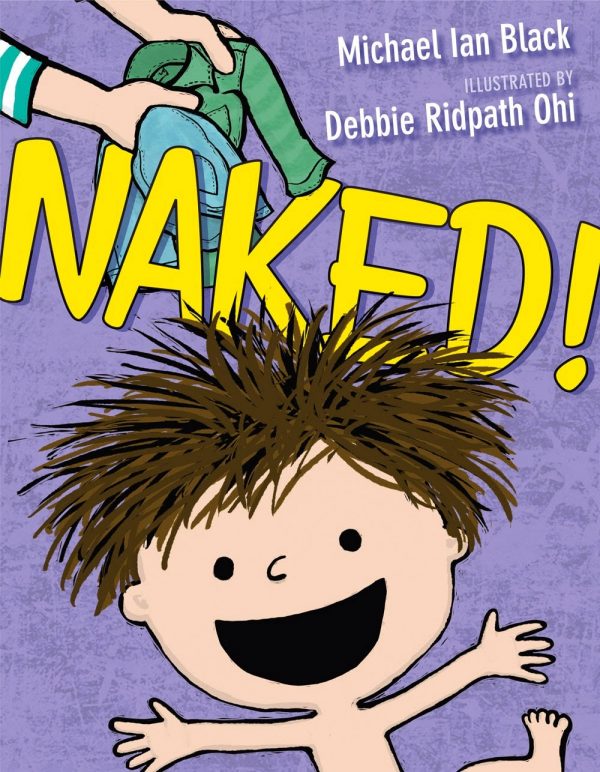 Naked! is a new picture book written by Michael Ian Black and illustrated by yours truly, published by Simon & Schuster at the end of April 2014.

This was my second picture book project and second collaboration with Michael.

While some aspects of the process stayed the same, I also discovered several differences.

​In this guest post, I’m going to tell you some of them as well as what I’ve learned, in case it helps other writer/illustrators.

What Was Different This Time Around? 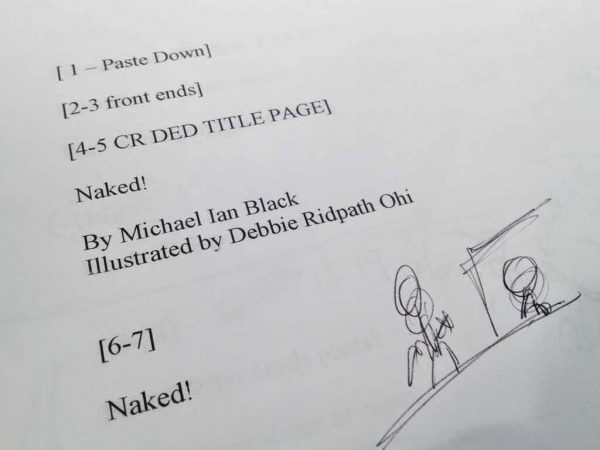 If I was approached to illustrate that kind of manuscript (heavy in
art notes or text description) at this point in my career, I’d probably
pass on the project.

Naked!
appealed to me for so many reasons, but mainly because I knew I’d have a
ton of fun working on the project and looked forward to the creative
collaboration. 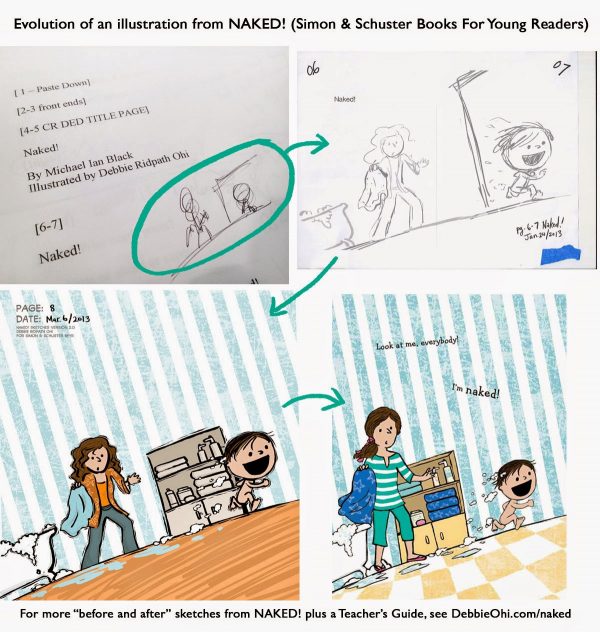 2. I had a much tighter schedule for Naked! than I did for I’m Bored.

I’m finding that with each book project, however, that my process gets more streamlined, and I feel more confident about what I can and can’t do.

Tip for aspiring picture book writer/illustrators: When putting together your portfolio or when working on developing an illustration style, make sure that the style(s) you pick are ones you’d be willing to work on for months at a time. If you have an illustration style or technique that is especially time-consuming, be aware that it may limit the number and type of book projects you are able to take. Which is fine, of course! But it doesn’t hurt to always be thinking of ways you could streamline your process without sacrificing the quality and enjoyment of your art.

3. I was (a tad) more organized. For I’m Bored, I used painter’s tape to stick sketches on my office walls and ceiling, to help me get a quick overview for flow and consistency. But the pictures kept falling down, and it was a hassle whenever I had to replace pictures when updated versions.

This time around, my husband set up a system in my office using heavy string stretched across my ceiling and small paperclips. Much easier! You can see the progression of sketch hangings in this video:

4. I used more photo reference for Naked! than I did for I’m Bored. Part of the reason was because I wanted to experiment more with slightly different angles. 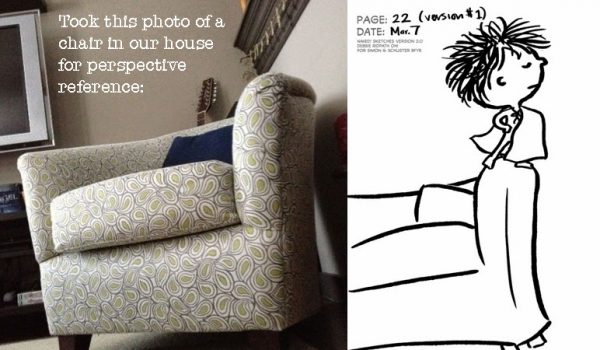 Another reason was because I’ve discovered that sometimes if I draw from my head without photo reference, I use the obvious position/scene placement. Experimenting with photo reference helped me try different ways of showing the same scene. 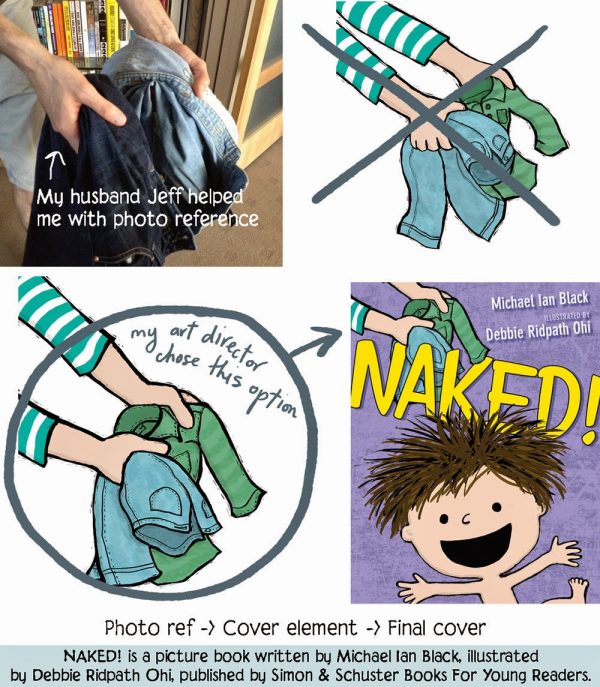 Tip for aspiring picture book illustrators: Learn basic photography. You don’t need a fancy camera; even a camera on your smartphone is fine. If you use someone else’s photos for reference, avoid image plagiarism. Jen Betton has a great blog post series about copyright for illustrators, but here’s her post specifically about photo reference and copyright issues.

5. I did my earliest sketches on paper, not on the computer. 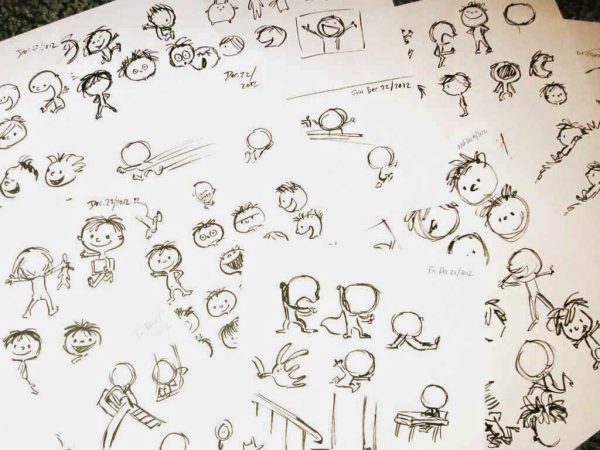 I did more experimenting with loose hand-drawn sketches for Naked! than I did with I’m Bored, just to see if it made a difference. And it did, mostly because I could sketch by hand pretty much anywhere, not just at my computer or with an iPad. Which meant that I did a lot more character sketching in the beginning, and a lot more experimentation.

Tip for aspiring writer/illustrators: Don’t get too precious about your sketches, or you’ll tighten up. Carry around a sketchbook or at least some blank cards or scrap paper all the time. Also don’t get too precious about your drawing tools, at least not for your sketches. Draw every day, draw different things than you’d normally draw, experiment. 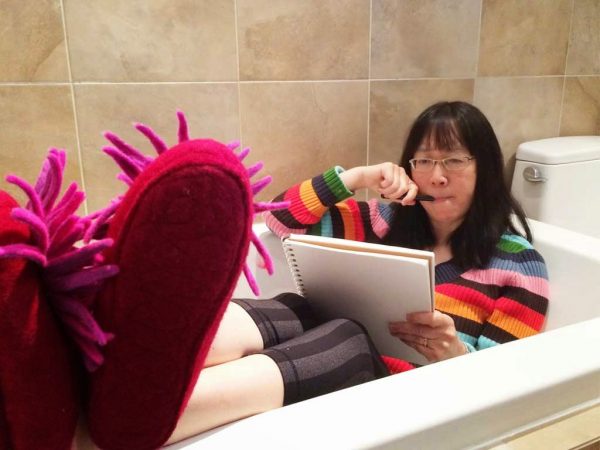 Debbie Ridpath Ohi write and illustrates books for young people. Most recently, she illustrated Naked! written by Michael Ian Black (Simon & Schuster) and the covers of seven Judy Blume classics being reissued by Atheneum. Her illustrations will also appear in three Judy Blume chapter books being reissued by Atheneum on June 3rd, 2014: Freckle Juice, The One In The Middle Is The Green Kangaroo and The Pain And The Great One. See also a Teacher’s Guide to Naked! and “How Naked! Was Made” and on Twitter: @inkyelbows.

See also How Naked! Was Made: The Making of a Picture Book from Debbie Ridpath Ohi.

18 thoughts on “Guest Post & Giveaway: Debbie Ridpath Ohi on Illustrating Naked! (& what I did differently from I’m Bored)”