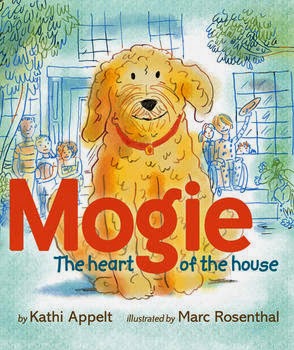 Congratulations to Kathi Appelt on the release of Mogie: The Heart of the House, illustrated by Marc Rosenthal (Atheneum, 2014). From the promotional copy:

Mogie is a real-life Labradoodle with a special talent: he always knows just what a sick kid needs! Get to know this passionate pup with this story by a Newbery Honoree.


One day a passel of puppies was born. Each puppy was designated for a Very Important Job, like Service Dog, or Search and Rescue Dog, or Groomed for the Show Ring Dog.


Each puppy, that is, except Mogie. Mogie was a ball-chasing, tail-wagging, moon-howling pup. Not the kind of pup for any of those jobs!

But there is a place that is just right for Mogie: a very special house where sick children and their families can stay while they undergo long-term treatment. A place with children who NEED a ball-chasing, tail-wagging, moon-howling pup.


And there’s one little boy in particular who needs Mogie. And Mogie is about to prove he’s the best darn pooch in the passel.

Based on a true story, this heartwarming picture book is published in conjunction with the Ronald McDonald House. 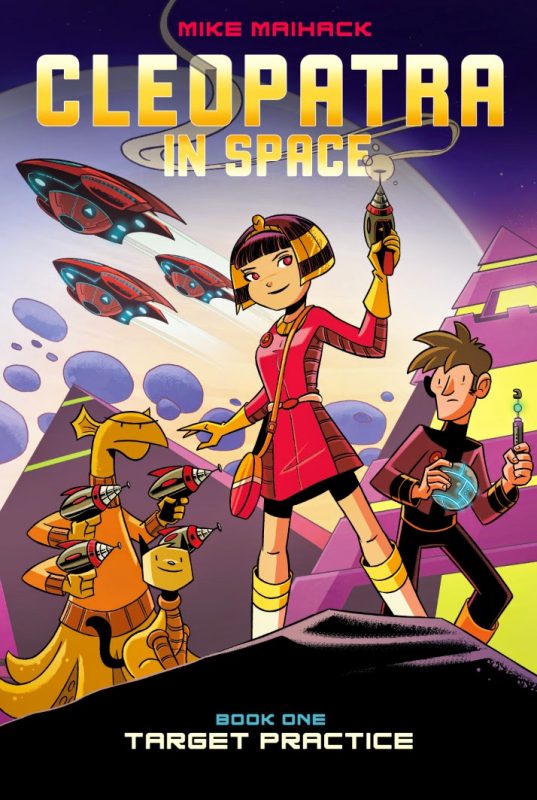 Being Brave: A Challenge for Writers in Particular and Humans in General by Christine Hayes from Emu’s Debuts. Peek: “…I let it fuel all the other things I don’t like about myself until I’m one big ball of self-pity and guilt: about my weight, about not being a Pinterest-perfect mother, about not writing often enough, about the stupid crumbs on the floor and dishes in the sink. And let’s not even touch the whole issue of ‘my writing isn’t good enough.’ Yeeesh.”

Character Talent & Skills: High Pain Tolerance by Angela Ackerman from Writers Helping Writers. Peek: “Pain from injuries can fog the mind and break the body, so developing a high tolerance level for it can greatly enhance one’s performance and endurance in most situations.”

Best Children’s Books of the Year, 2014 Edition from the Bank Street College Center for Children’s Literature. Peek: “includes more than 600 titles chosen by the Children’s Book Committee as the best of the best published in 2013. In choosing books for the annual list, committee members consider literary quality and excellence of presentation as well as the potential emotional impact of the books on young readers. Other criteria include credibility of characterization and plot, authenticity of time and place, age suitability, positive treatment of ethnic and religious differences, and the absence of stereotypes. Nonfiction titles are further evaluated for accuracy and clarity.” Source: Educating Alice.

Story Midpoint & Mirror Moment: Using Heroes’ Emotions to Transform Them by Angela Ackerman from Writers Helping Writers. Peek: “So what type of emotions are the best fit to encourage this necessary shift toward change? And are they positive emotions, or negative ones? Let’s experiment!”

ATTN Writers of Color and Native Writers! Submit Your Novel to Tu Books’ New Visions Award Program from Lee and Low. Peek: “it’s obvious that readers want to see more writers of color represented. It is our hope that the New Visions Award will help new authors begin long and successful careers and bring new perspectives and voices to the science fiction, fantasy, and mystery genres.” 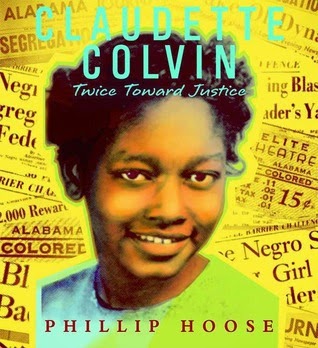 Marketing African-American Titles by Kirsten Cappy from The Brown Bookshelf. Peek: “Using a combination of small grant funds, school partnerships, and community sponsors like the NAACP, we launched the exhibit by flying Claudette Colvin in for a
preview. After a lifetime of silence and before publication would make Claudette’s story national, this was the first time she had seen her words in print.”

The False Divide Between Book Promo and Author Promo by Sharon Bially from Writer Unboxed. Peek: “promoting yourself as an author does help spread the word about your work. In fact, an author-focused platform will most likely sustain over time far beyond any book’s moment in the spotlight, keeping your name out there and increasing the chances that whatever you write next will have an audience and find a home in readers’ hearts.”

Industry Q&A with Author Crystal Chan from CBC Diversity. Peek: “Diversity is a tricky word. Personally, I don’t really like that word – it conjures up images of everyone of different colors holding hands and singing. Diversity is hard work, plain and simple, and it means giving up a bit of your defined world to be able to let others in, to see the ‘other’ as just as human as you are.”

10  Books for Kids Who Hate to Read by Lisa Graff from The Huffington Post. Peek: “Do you have a kid like Albie who would rather eat Brussels sprouts than read a single page of “fine literature?” Here are ten amazing books — some well-known, others less so — sure to grab even the most reluctant of readers.” Note: Congratulations to Lisa on the release of Absolutely Almost (Philomel, 2014), which has received four starred reviews!

Don’t Write the World’s Best Fantasy Novel by Beth Fantasky from Adventures in YA Publishing. Peek: “I didn’t have to write The World’s Best Novel. I had to be the mentally tough person who had the guts to get knocked down by rejection, pick myself up, and try again.” 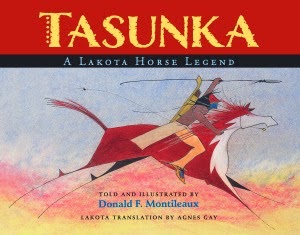 Donald F. Montileaux’s Tasunka: A Lakota Horse Legend (South Dakota State Historical Society): a recommendation by Debbie Reese from American Indians in Children’s Literature. Peek: “One of the things I look for when reading a traditional story rooted in a Native Nation is an attribution of where the story was heard, and from whom. In Tasunka: A Lakota Horse Legend, Montileaux gives us that information right away in a two-page introduction.”

Check out the book trailer for Hope’s Gift by Kelly Starling Lyons, illustrated by Don Tate (Putnam, 2012). From the promotional copy: 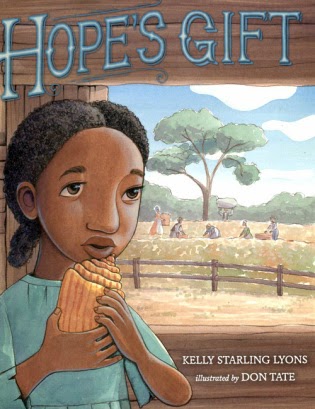 It’s 1862 and the Civil War has turned out to be a long, deadly conflict.

Hope’s father can’t stand the waiting a minute longer and decides to join the Union army to fight for freedom. He slips away one tearful night, leaving Hope, who knows she may never see her father again, with only a conch shell for comfort.

Its sound, Papa says, echoes the promised song of freedom.

It’s a long wait for freedom and on the nights when the cannons roar, Papa seems farther away than ever. But then Lincoln finally does it: on January 1, 1863, he issues the Emancipation Proclamation, freeing the slaves, and a joyful Hope finally spies the outline of a familiar man standing on the horizon.

The winner of a signed copy of The Cabinet of Curiosities: 36 Tales Brief and Sinister by Stefan Bachmann, Katherine Catmull, Claire Legrand & Emma Trevayne (Greenwillow, 2014) is Yvonne in Virginia.

Behind the scenes, we’ve been twice to Party City to pick up cups, plates, napkins and bling. After dinner at 24 Diner on Monday night, two of the three featured authors, plus author-spouse Chris Barton and M.C. Tim Crow met at Chez Leitich Smith to plan and rehearse their Mayhem.

I retired upstairs so that the show would come as a surprise; however, I did hear mention of wedding cake, bubble wands and a prop on loan from fellow Austin author Lindsey Scheibe that’s so big it will require a gigantic flatbed truck to transport.

Speaking of which, my most enthusiastic congratulations to Greg Leitich Smith on Tuesday’s release of Little Green Men at the Mercury Inn (Roaring Brook, 2014)! Don’t miss his thoughts on writing realistic vs. speculative fiction for middle graders!

The Austin American-Statesman raves, “‘Little Green Men at the Mercury Inn’ swerves and accelerates into madcap places — rumors, conspiracy theories and government coverups…Smith has a sure hand with atmosphere, drawing us into Aidan’s world from the opening…And though plot twists will likely be the main appeal of ‘Green Men,’ there’s a gentler bonus to Smith’s story of the truths that bind us together — human and alien. Simple yet evocative illustrations from Andrew Arnold accent the text.” See the article by Sharyn Vane in Sunday’s Book Section for more.

See also: To Infinity and Beyond by Cynthia K. Ritter from The Horn Book. Peek: “The twisty plot and engaging setting of Greg Leitich Smith’s Little Green Men at the Mercury Inn, along with Andrew Arnold’s retro cartoon spot art, work well with the wacky characters and situations.”

Speaking of Debbie, congratulations to her on “Whistle Punk” being selected as a middle grade finalist in the Writers’ League of Texas manuscript contest and to both Hamilton Beazley (“Nowhere to Be” and Krissi Dallas (“Icarus Flight School) for being selected as finalists in the YA division!

My link of the week is Something New by Meredith Davis from Stories in the Streets. Lovely. 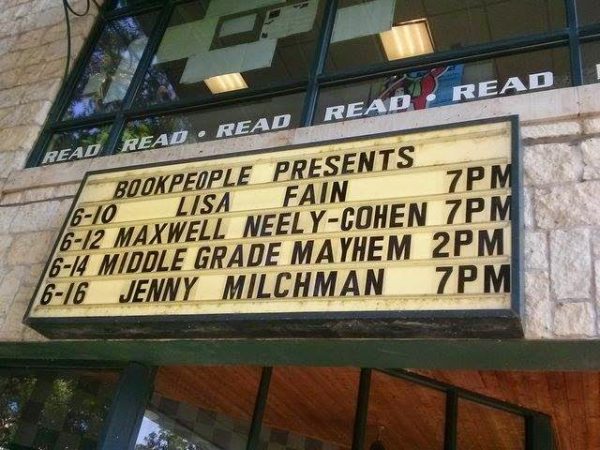 Breaking news! Cynthia and Greg Leitich Smith will speak at the Writers’ League of Texas 2014 Agents and Editors Conference to be held at the Hyatt Regency Austin from June 27 to June 29 in Austin, Texas.