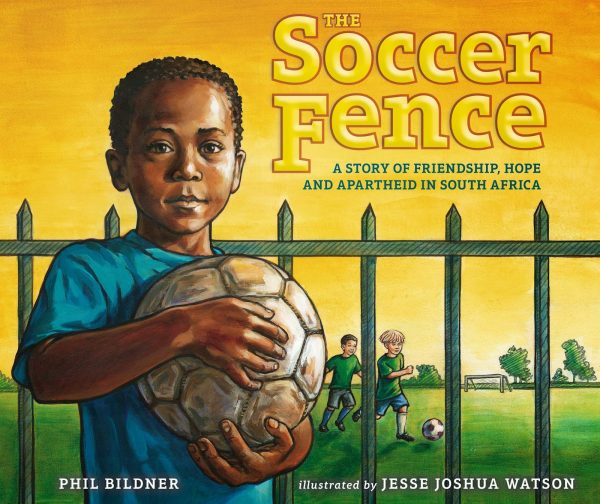 I don’t have many heroes.

There are many people I admire, but few I consider to be personal heroes.

Nelson Mandela is one of my heroes.

The same goes for Jesse Joshua Watson, the illustrator of The Soccer Fence (Putnam, 2014). For Jesse, Nelson Mandela was something of a genesis in his life.

As a teen, rather than internalize the anger at the injustices he saw around virtually every corner, Jesse pursued other outlets. He turned to art.

With The Soccer Fence, I set out to write a timely sports story that also introduced young readers to an important moment in history. Writing the football parts was easy. Weaving in the historical parts without sounding too much like the teacher in me posed the greater challenge.

And as I wrote and rewrote, I struggled with a lingering concern: How could I write a book that takes place in South Africa without ever having been?

The Soccer Fence gave me that opportunity.

I visited last August, several months before he passed. By that point, the book was about ready to go to print. Jesse had completed the art, and for him, it had been a magical opportunity to soak back into the emotions of his fifteen year-old self. On every page, he tapped into that raw anger at injustice, the not yet jaded hopes of a newcomer and the abandon of an emerging artist.

Still, I couldn’t shake my doubt. I needed to be absolutely certain that we got everything right or as close to right as possible.

My first stop in South Africa was the Apartheid Museum, and I wasn’t anywhere close to being emotionally prepared. It was every bit as gut-wrenching as a visit to the United States Holocaust Museum. All that I’d come across in my research–the Pass Laws, the Sharpeville Massacre, the Rivonia Trial, Stephen Biko–it was all here. 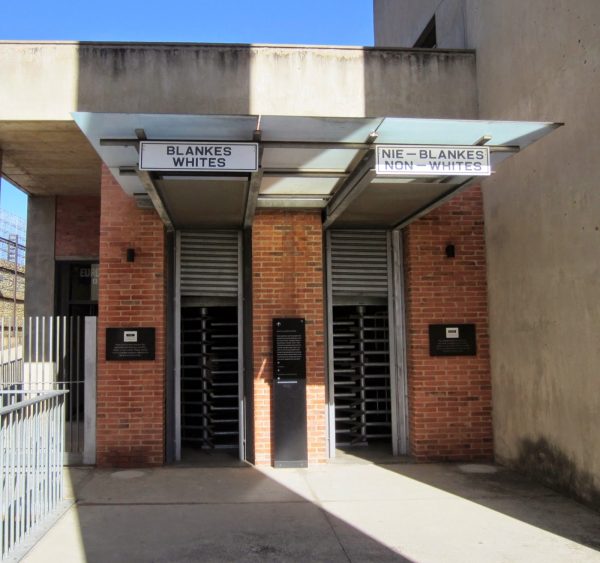 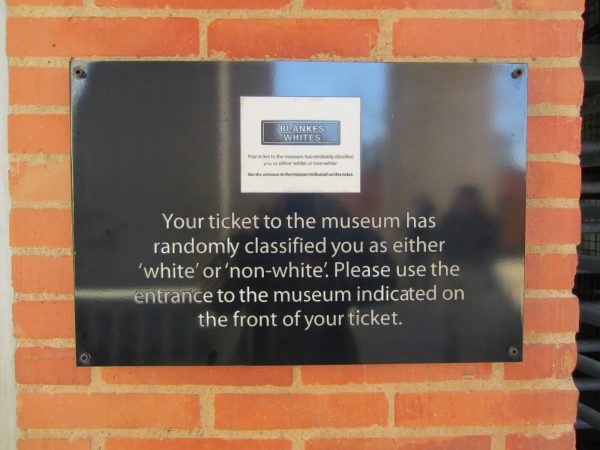 After touring the museum, visitors are encouraged to sit in the gardens and walk the grounds in order to help process the experience and decompress.

I was out there for hours.

Since much of The Soccer Fence takes place in a township outside of Johannesburg, I needed to visit one. So my next stop was Soweto.

When I got out of the van in front of the hostel, a group of kids were playing football across the road. 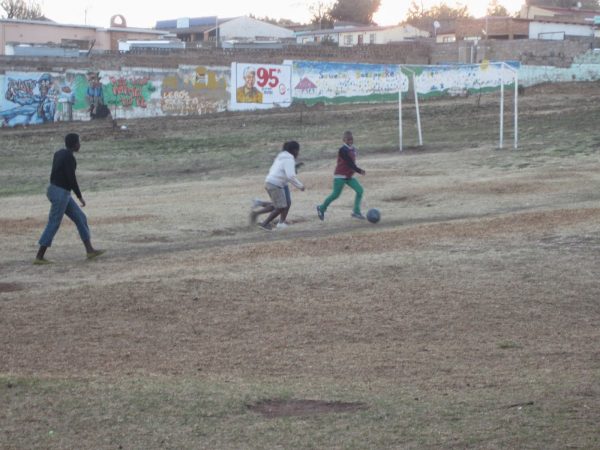 It was a scene straight out of the book, and it was at that moment that my lingering doubts and concerns vanished. Jesse had attempted to paint the legacy of his greatest hero with all the care of a shaman preparing medicine for a terribly sick patient.

When I booked the trip, I didn’t know about the Nelson Mandela Sports and Culture Day scheduled for Aug. 17. For the first time ever, the Bafana Bafana national football team and the Springboks national rugby team were playing on the same field on the same day. They were playing at FNB Stadium, where Nelson Mandela addressed the nation after twenty-seven years in prison.

In our book, that’s where Hector and Chris, cheered “Yebo, Bafana Bafana!” and sang “Shosholoza” as they stood in the upper deck during the African Cup of Nations.

I went to Mandela Day. I cheered “Yebo, Bafana Bafana!” and sang “Shosholoza” standing in the upper deck of FNB Stadium. 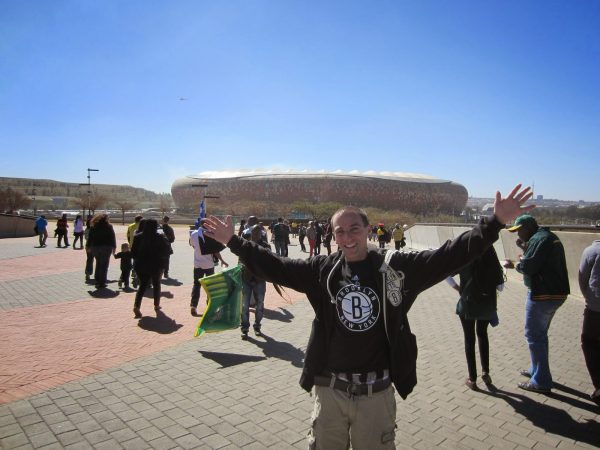 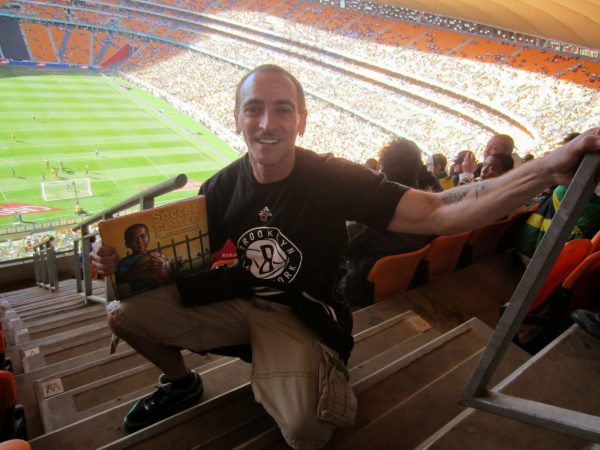 In every sense, the book has exceeded our expectations. Recently, a librarian told me she grouped The Soccer Fence with Nelson Mandela by Kadir Nelson (HarperChildren’s, 2013) and The Other Side by Jacqueline Woodson, illustrated by E.B. Lewis (Putnam, 2001). 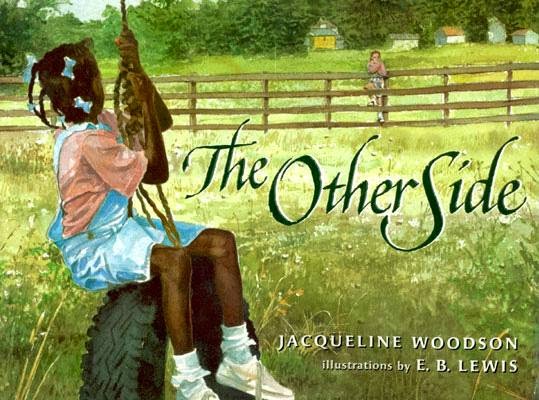 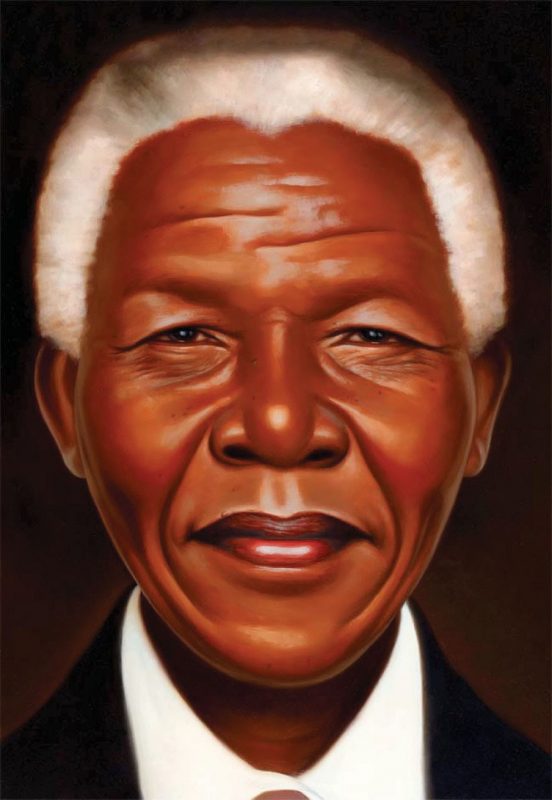 2 thoughts on “Guest Post: Phil Bildner on The Soccer Fence”