I keep getting asked: “What is it like, living with another writer?”

Chris Barton, the love of my life, who lives with me in a not-quite-big-enough house in Austin, also writes books for young people.

This shared pursuit brought us together in the first place, and had a lot to do with our courtship.

Now it’s a huge part of our marriage.

I think what people are specifically wondering about is how does it help or hinder our writing – and our marriage?

Upon reflection I’ve come up with some underlying “rules” that make our partnership work.

1) We celebrate each other’s triumphs – even if it’s “Yay, you worked out that thorny section in chapter nine!” Because we are fans of each other’s work, each other’s victories feel like our own.

But also, we know that because other rewards, like honors, critical acclaim, and, yes, money, are fleeting in this business, we need other ways to measure our success. And a hard-fought victory over a tricky section is every bit as worthy of commemoration as a major award.

In addition to complimenting each other…

2) We complement each other. He’s tilted toward nonfiction and I’m strictly in the made-up realm. He’s mainly picture book and I’m YA /middle grade. He’s a little bit country and I’m a little bit rock and roll.

There’s plenty of room in the writing world for both of us so it isn’t like we’re competing for the same prize.

Plus, we learn from each other. He’s great at logistics and structure. Meanwhile, I can easily steep myself in a story’s emotions and will know my main characters as if they were living under our roof.

3) We respect each other’s processes. Chris can work in one to two-hour bursts every day from inception to finish. I start out slowly and end up in deep dive where I work for several hours at a time. Near deadlines I’m pretty useless in the outside world, and will forget other obligations or details. Like dental appointments. And my name.

We do our best to understand each other’s methodologies. It’s like being a boxing trainer. You have to know when to get in there, give water, massages, and pep talks, and when to get the heck out of the ring and let the other person do what they do. Which brings me to my last item…

4) We know how we each take our coffee and sandwiches. Often it’s the small things, like having a grilled-cheese with a slice of fresh tomato set beside you as you work, that can keep you going through tough spots – both in marriage and writing.

Marriage and writing are somewhat similar.

You have to be committed. You have to know that when it isn’t perfect, you can always find a way to make it better. And both allow you the opportunity to create something meaningful and enduring.

Here’s to happy ever afters.

Congratulations to Jennifer Ziegler on the release of Revenge of the Flower Girls (Scholastic, 2014)! From the promotional copy: 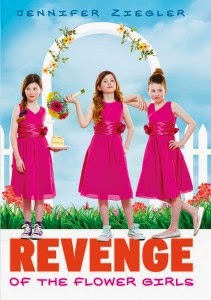 One bride. Two guys. Three flower girls who won’t forever hold their peace. What could go wrong with this wedding? Everything!


The Brewster triplets — Dawn, Darby, and Delaney — would usually spend their summer eating ice cream, playing with their dog, and reading about the United States presidents. But this year they’re stuck helping their big sister, Lily, plan her wedding. Lily used to date Alex, who was fun and nice and played trivia games with the triplets, and no one’s quite sure why they broke up. Burton, Lily’s groom-to-be, is not nice or fun, and he looks like an armadillo.


The triplets can’t stand to see Lily marry someone who’s completely wrong for her, so it’s up to them to stop the wedding before anyone says “I do”! The flower girls will stop at nothing to delay Lily’s big day, but will sprinklers, a photo slideshow, a muddy dog, and some unexpected allies be enough to prevent their big sister — and the whole Brewster family — from living unhappily ever after?

3 thoughts on “Guest Post: Jennifer Ziegler on How to Live Happily Ever After With Another Writer”