Are you struggling with a novel?

Is there a manuscript in a drawer that’s still haunting you?

Feral Curse (Candlewick, 2014) is a novel that rose from the ashes in more ways than one.

In February 2000, I began writing a story inspired by my favorite Halloween decoration. A spooky carousel, complete with lights, motion and music. The story was sometimes called “The Arrivals” and sometimes called simply “Carousel.”

By December 2003, I had a draft of a novel that transported its teen heroes from the real world to an alternative Austin, controlled by a haunted carousel. Within the fantasy construct, anyone who touched one of the detached carousel figures was transported from one dimension to the next.

It was submitted once to an editor, received a lovely rejection, and I shelved it.

I didn’t shelve it because of the rejection but because the story was more an exercise in intellect than passion and because, having established myself as a realism author, I wanted to more drastically diversify my body of work. A bigger, bolder, scarier, even more fantastical story.

With rare exceptions, neither art nor commerce rewards baby steps. But sometimes you have to reposition yourself before moving forward again.

How did I do that?

In January 2000, I jotted down notes on a YA novel tentatively titled “Brad, The Impaler.”

The story morphed into Tantalize, which sold in 2005 and was released by Candlewick/Walker in 2007. I continued in that vein with Eternal (2009), Blessed (2011), Diabolical (2012) as well as two graphic novels, illustrated by Ming Doyle, Tantalize: Kieren’s Story (2011) and Eternal: Zachary’s Story (2013). The series is suspenseful Gothic fantasy with mystery and romantic elements as well as some humor.

Then I spun off  the Feral trilogy, which began with Feral Nights (2013) and continues with Feral Curse (2014). The new books are set in the same world but pivot from Gothic to fantasy-adventure. Each can stand alone, but faithful readers are amply rewarded.

At the center of Feral Curse is a haunted carousel.

Here’s the bigger question: Should I have given up on “The Arrivals”?

As a writing teacher, I’ve seen students take the ten-plus years they genuinely needed to make a manuscript work, and I’ve seen students spin endlessly on stories because they’re clinging to the security of a draft and they fear that, if they give it up, the time spent will have been wasted.

Did I give up on “The Arrivals”?

Yes and no. I gave up words–30,305 of them (the fashion in YA was shorter back then). I gave up characters I’d built, three of whom were precious to me, and favorite scenes set in the Texas Governor’s Mansion, the Austin History Center and at a fictional 24-hour deli inspired by Katz’s, which, alas, is no longer on 6th Street.

I gave up a fully imagined and executed draft–a marketable draft. 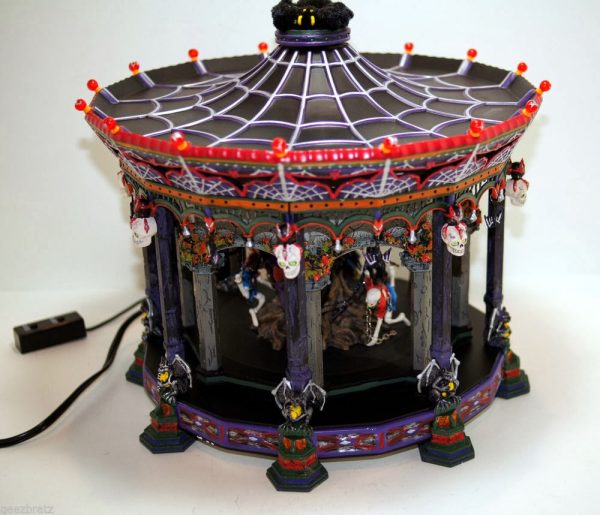 But I grabbed onto the element that captivated me in the first place: the spooky carousel.

One way I’ve kept the Tantalize-Feral books fresh is to change settings. Readers have gone from a cosplay restaurant in South Austin to a modern-day castle in North Chicago to a (Texas-to-Michigan) road-trip to a Vermont boarding school to a South Pacific Island and, now in Feral Curse, to fictional Pine Ridge, Texas.

Why there? I began writing Feral Curse in the wake of the Bastrop County Complex Fire of September-October 2011. It was “the most destructive wildfire in Texas history.” It was horrible. Two people died, and 1,673 homes were destroyed.

I didn’t want to write about that real-life experience. For me, it’s far too soon. Instead, I wanted to write a fantastical story for YA readers, an escape and a salute to those who’d been touched by that kind of life-changing devastation. I also wanted to diversify out my cast to include a small-town hero.

I’m a sense-of-place writer. To the extent possible, I try to fully experience my characters’ world.

Strolling the Bastrop River Walk, my mind’s eye could see it: the haunted carousel…along the banks of the Colorado River in the shadow of the historic downtown.

So, about your story? The shelved manuscript that’s haunting you?

Ask yourself: Where is the magic? What element first captivated me?

Pick it up again, let everything else fall away, and give yourself permission to re-imagine.

I’m rooting for you!

To learn more, check out this interview about the Feral series at teenreads. Peek: “My characters are confronted with hate groups, a sometimes unfair judicial system, employment discrimination, pressure to keep their identities secret and so on. But it’s not a dystopian world, in the same way that, for all our problems, ours isn’t either.” Read more. See also an excerpt of Feral Curse.

See also this interview from WIFYR: “My current writing focus is Feral Pride (Book 3). It’s off to my editor and sure to generate a hearty revision letter. I so need her help. I’ve struggled with it more than my past few novels, I think because it’s the last in the Tantalize-Feral universe, which spans six previous prose novels, two graphic novels and three short stories. …with the last installment comes hefty expectations.” Read more.

Check out my favorite quote from Feral Curse at YA Series Insiders.

20 thoughts on “Feral Curse: Giant Steps Through the Ashes”