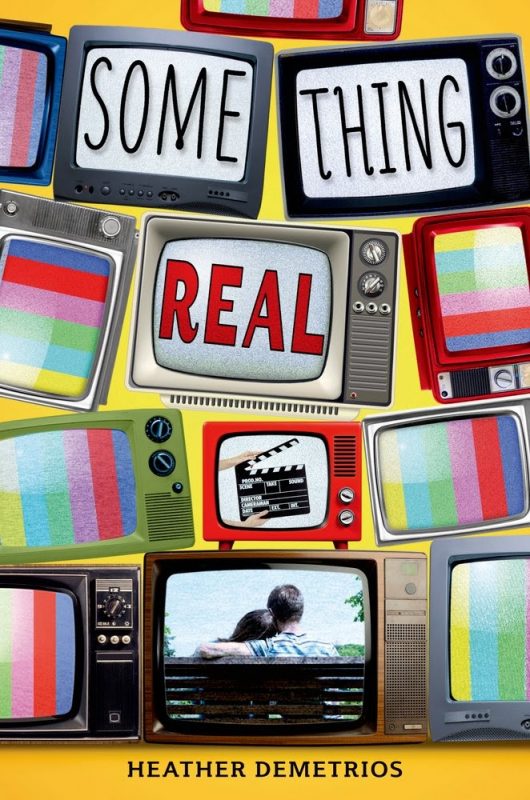 Heather Demetrios is the first-time author of Something Real (Henry Holt, 2014)(excerpt). From the promotional copy:

Seventeen-year-old Bonnie™ Baker has grown up on TV—she and her twelve siblings are the stars of one-time hit reality show “Baker’s Dozen”.

Since the show’s cancellation and the scandal surrounding it, Bonnie™ has tried to live a normal life, under the radar and out of the spotlight. But it’s about to fall apart…because “Baker’s Dozen” is going back on the air.

Bonnie™’s mom and the show’s producers won’t let her quit and soon the life she has so carefully built for herself, with real friends (and maybe even a real boyfriend), is in danger of being destroyed by the show.

Bonnie™ needs to do something drastic if her life is ever going to be her own—even if it means being more exposed than ever before.

What is it like, to be a debut author in 2014? What do you love about it? What are the challenges? What came as the biggest surprise? In each case, why?

It’s a pretty amazing time to be a YA author and I think it’s especially great to be debuting with a contemporary realism in 2014 because I keep hearing more and more that readers are looking for good stories about characters from the “real world.” For a while there, it seemed like all anyone wanted to read was fantasy/paranormal lit.

I also write fantasy and am thankful that YA embraces the genre so much, but it’s great to see excitement surrounding my contemporary novel. I love that there are so many amazing book bloggers out there who are passionate about books and joygasming over everything that’s coming out.

I didn’t realize just how vibrant the YA community was until I started focusing on my social networking more, especially Twitter. It’s really beautiful to see such enthusiasm about a category I love so much (YA) and have often felt forced to defend to people who think what I write isn’t as legitimate as, say, an adult novel.

I’ve made a lot of new friends through Twitter, even though the only reason I started using it was to get the word out about my debut novel. Now, I confess, I’m addicted!

I think the biggest challenge is the increasing pressure to “market” yourself as a writer. My publicist and the marketing team at Macmillan/Henry Holt are great, don’t get me wrong. This is just the new norm in publishing. 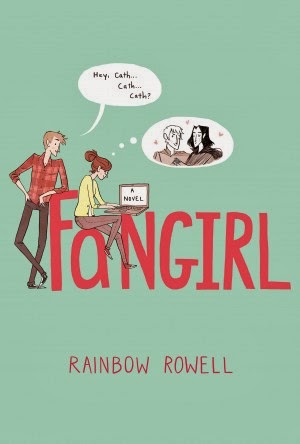 As a writer—and I would argue that specifically as a YA writer—we need to be out there in the YA community, creating a public profile and weighing in on everything from the hottest new YA trend to our publishing process to who our newest book boyfriend is (Levi from Fangirl by Rainbow Rowell (St. Martin’s, 2013)).

In a way, this is pretty awesome. I think now more than ever, writers have the privilege of getting to interact with their readers one on one. It’s been amazingly gratifying to get messages on Goodreads or tweets from readers who have been touched by my work. It is just so incredibly cool and pretty much my favorite part of this whole process.

That being said, I spend a lot more time on social networking than I ever have before and it certainly can be difficult to go from trying to promote your book and being active in the YA scene to trying to write your next one. I constantly need to remind myself to keep my creative Zen.

I know writers everywhere are facing this challenge. My big thing is to not check my email. Because these days, it all feels important. Whether it’s one of my editors with a question about the cover or my agent or a blogger who’s a stop in my blog tour, it’s pretty rare that I don’t want to answer my email right now. But this blocks creative flow and takes you out of that mindset you need to be in, where you’re connected to your characters, immersed in your world, and playing with words.

I’ve been lucky, too, to have so many wonderfully supportive people in my life, from writer friends to classmates to mentors. These people keep me in check. One of my mentors, A.M. Jenkins, told me that my writing needs to feed me and that I need to protect my core, so to speak.

As writers, we have to be careful not to get so swept up in all the hoopla that we lose track of why we’re here in the first place: the work.

Perhaps the biggest surprise has been my inability to enjoy all of this as much as I’d like to. The past few months leading up to my launch have been so busy, not just with my debut, but with the other four books I have under contract and the work I’m doing on my MFA (I’m getting an MFA in Writing for Children and Young Adults from Vermont College of Fine Arts).

My husband is constantly telling me to soak all of this up, and he’s right—you only get to be a debut author once!

I was recently able to quit my day job and that’s an exhilarating and terrifying place to be. A dream come true, yes, but a dream that I want to live in for more than a year or two. So I’m constantly worrying about the next book, or if I’m doing enough to promote my debut, or if I’ve tweeted enough on a given day. But when I get to hold my real finished book in my hands, I’m definitely going to do a serious book shimmy.

This is a really important issue in my debut novel because it’s about a girl who’s on a reality TV show with her family. So, first, you’ve got reality TV itself, which has only really been around for about twelve years. It’s a phenomenon that might be over by the end of the decade (or it might not, but who knows?). My whole premise might date the book or at least have it be a bit of a time capsule item, but I decided to go for it because I felt the story was worthy of the time and effort it takes to make a book. 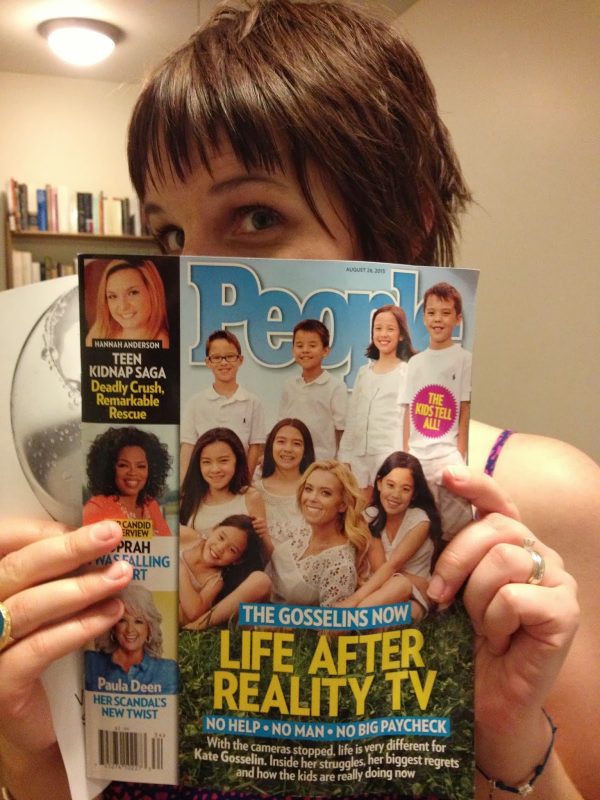 In addition to that, Something Real has lots of interpolations, from Twitter feeds to gossip blogs. In this case, I just had to go with the technology that was pervasive during this time in my protagonist’s life.

When you’re a reality TV star, the media is on you like white on rice. I really wanted to show how she is in the middle of a media storm and the interpolations often reflect the different fronts of this war on her privacy.

They’re also, in my opinion, part of what makes the book unique and they give me an opportunity to widen the narrative circle a bit, since the rest of the book is in first person.

Because the book takes place in the present, I also have characters using cell phones and chatting online. This wasn’t too bad until I realized in my first-pass pages that the language I was using for a chat session my protagonist, Bonnie™, was already outdated—I used the abbreviation “IM” and suddenly thought: wait, if you’re on gchat, do you call it ‘instant messenger’? No, you don’t.

So my editor and I went back and forth, trying to figure out what language we could use that wouldn’t date the book too much. Saying my protagonist was on gchat was something we decided against, since who knows how long gchat will actually be around? We went with “message” as in, “Patrick messaged me.” It felt weird, but it was what worked out best.

I envy people who write historical fiction or other genres that don’t have to rely so much on reflecting a teen’s society as it is now (my current fantasy trilogy takes place in Los Angeles, but thankfully moves to the jinni realm, where my characters use magic and swords and ride gryphons).

Everything is changing so much that it is really easy to date your book, and I think you can only worry about that so much.

If there are places where you can cut down on technology, great. But you have to keep it real—teens are not writing notes in class now, they’re texting. So unless you can give us a real reason why they’re not texting the person sitting across the room (like, a cell phone ban in the school or a note that is more of an artistic statement than a conveyance of information), you have to go with what your character would really be doing. 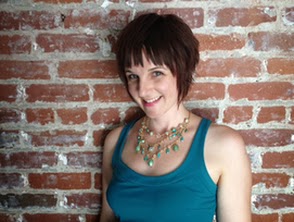 I think in terms of authenticity, you have to tell your character’s story. If she’s living in the twenty-first century, technology is going to be a big part of her daily life. However, I don’t think it’s something a writer should rely too heavily on.

The pervasiveness of technology forces us to think of creative solutions (for example, if a character is lost and you don’t want them to be able to pull up their Google maps, then you’re going to have to create some unique and interesting circumstances or motivations, right?).

I do think it’s something writers need to be very aware of. If you don’t want your book to be too dated, keep pop culture references to a minimum and create scenarios in which technology doesn’t take center stage.

Ultimately, I know Something Real has a chance to last for a while because what’s going to draw the reader to the book is Bonnie™’s fight for privacy and sovereignty, not how she chats with boys online or texts her BFF.