My first picture book as both author and illustrator, Penguin Cha-Cha, was published recently by Random House. I loved illustrating my own story, but I also love illustrating other authors’ books.

I’ve illustrated a handful of those, including the upcoming Pretty Minnie in Paris, written by Danielle Steel, about a teacup Chihuahua in the fashion world of Paris – Oh la la!

I approach illustrating someone else’s manuscript differently than when I illustrate my own. 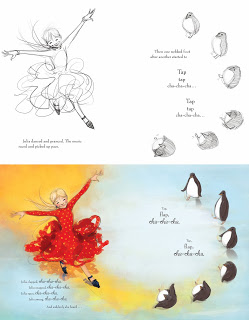 When I’m given a manuscript to illustrate, much of the storyline is already there and can’t be changed. I do have some creative freedom in bringing my half to the book, and to promote that, the publisher usually keeps the author and illustrator away from each other.

I can deepen the story by adding elements, and sometimes even characters, to the illustrations that aren’t mentioned in the text. For example, in the picture book, Cora Cooks Pancit (Shen’s), I added in a dog that wasn’t in the text and used him to echo the main character’s feelings with a problem of his own – all through the illustrations. 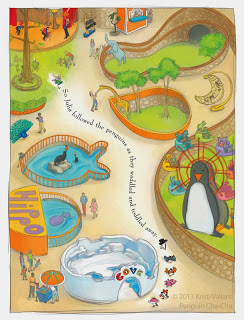 When I wrote and illustrated Penguin Cha-Cha, the visuals came first and the illustrations influenced the writing of the text in a major way.

Penguin Cha-Cha started as a portfolio illustration. The great thing about portfolio pieces is that you can draw anything you fancy. I was in a Latin-and-swing dance group and I liked penguins, so I drew dancing penguins.

Art directors and editors kept asking if I had a story to go with the illustration. They could see just by looking at the dancing penguins that I had fun drawing them.

When that joy shines through an illustration, it’s time to start thinking about making a book.

So I began writing stories about dancing penguins. Learning the craft of writing picture books, of course, took time and many tries. 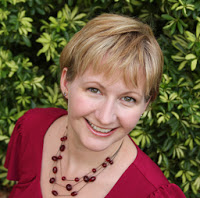 I’m still learning, but what worked the best for me was to envision my dancing penguins story in my head as a sort of animation and pick out the key parts that forwarded the story and were the most visually interesting to draw as spreads for the book. Then I added in just the words necessary.

My editor had me add in a bit more text after the dummy was acquired, but mostly we stuck with the original dummy.

Many of us author-illustrators tend to start as illustrators and therefore are more visual than wordy. We can show part of the storyline in the illustrations, so perhaps not as much text is needed.

Check out the picture books on your own shelf and see if you can tell if the same person wrote and illustrated them. 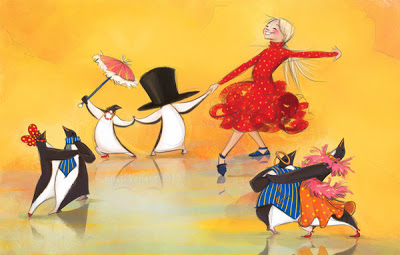 Enter to win a signed copy of Penguin Cha-Cha, a bookmark, a sticker and a magnet. Author sponsored. Eligibility: U.S. only.