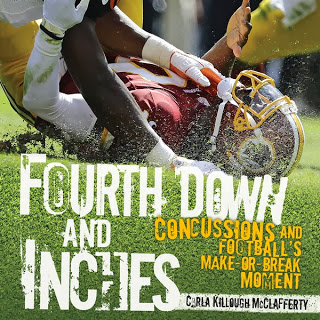 Of all my books for young readers, the one that reveals the most of my own heart is my newest book, Fourth Down and Inches: Concussions and Football’s Make-or-Break Moment (Carolrhoda, 2013).

As I began the research for the book, I recognized that I have a deep emotional connection to head injuries. My youngest son, Corey, died from a head injury after falling from a swing at the age of fourteen months. But I had no idea how personal it would get.

I began my research with the science part of the book—the easiest part for me. I managed to get a telephone interview with Dr. Ann McKee, a neurologist and neuropathologist who is an internationally renowned expert on Chronic Traumatic Encephalopathy (CTE).

Dr. McKee is frequently in the news because she has studied the brains of deceased NFL players found to have the disease. She graciously answered my questions and gave me permission to use her brain images in my book.

I also interviewed Dr. Robert Cantu, probably America’s leading authority on the treatment of concussions. Then I talked at length with the researchers from Purdue and the University of Michigan who study the effects of repetitive head injuries on High School football teams.

Next my goal was to understand the love of football. I interviewed football coaches, athletic directors, athletic trainers, and retired NFL players.

And boy did he ever tell me! When I couldn’t get his stories out of my mind, I knew they had to be in the book. Talking to Kevin allowed me to see football through the eyes of a man who loves the game.

Then I came to the hardest part of my research. I interviewed the
families of Nathan Stiles and Eric Pelly. Nathan and Eric were both
teenagers who died as a result of concussions—and both of their brains
already had Chronic Traumatic Encephalopathy (CTE).

By this point in my research I understood that even though the cause of the injury was different, my son Corey died in the same way as Nathan and Eric.

The writer in me asked these families the hard questions. At the same time the woman in me — who knows the devastation of losing a child — grieved for their sons and for mine.

I promised these families that I would write about the life and death of their sons with the same love and respect that I do when I write about my own child.

I am humbled that they trusted me.

When promoting my book, I say that Forth Down and Inches: Concussions and Football’s Make-or-Break Moment deals with the reality of concussions balanced with the love of the game. And it is. But between the text and the white space, the book is a whole lot more.

4 thoughts on “Guest Post: Carla Killough McClafferty on Revealing Your Heart in Nonfiction”