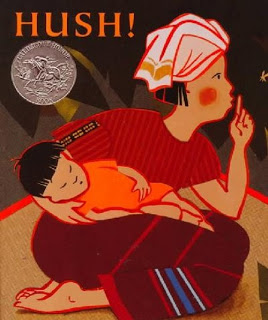 Holy Meade, Artist and Kids’ Book Author-Illustrator Dies at 56 by Karyn M. Peterson from School Library Journal. Peek: “An acclaimed artist in many mediums, Meade is perhaps best known for her intricate woodblock prints, and among children’s librarians for her more than 30 picture books.”

From The Daily News of Newburyport: “Holly Louise Meade, 56, passed away on Friday, June 28…. After illustrating her first children’s book in 1992, she began a flourishing career that followed with nearly 30 books, a number of which received recognition through awards, including a Caldecott Honor and the Charlotte Zolotow Award for Creative Writing.”

Seven Questions Over Breakfast with Holly Meade by Jules from Seven Impossible Things Before Breakfast. Peek: “The majority of my illustrative work has been done in cut paper collage.”

See also The Holly Meade Memorial from Curious City. Peek: “In memory of Holly, Curious City encourages those that love her children’s book work to donate a copy or copies of her picture books to the Maine Children’s Cancer Program (MCCP) for an in-house library and for distribution to the children they serve.”

2 thoughts on “In Memory: Holly Meade”