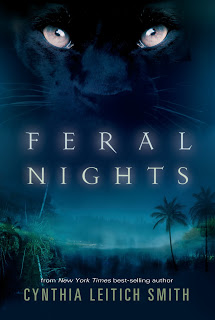 Celebrate the Australia-New Zealand release of Feral Nights (Book 1 in the Feral series) and Eternal: Zachary’s Story, illustrated by Ming Doyle (a graphic novel from the Tantalize series) by entering to win copies of your very own! Eligibility is international; anyone can win!

Feral Curse (Book 2) is off to copy editing. It’s set in a fictional small town, based on Bastrop, Texas; and will be released in early 2014.

Feral Nights (Book 1 in the Feral series) is now available from Walker Books Australia and New Zealand. It was released in North America from Candlewick Press earlier this year. From the promotional copy:


When all three seekers are snared in an underground kidnapping ring, they end up on a remote island inhabited by an unusual (even by shifter standards) species.
The island harbors a grim secret and were-predator and were-prey must join forces in a fight to escape alive.

Cynthia Leitich Smith & Feral Nights: an interview from Joy Preble. More
thoughts on the new novel and its main characters, balance (or lack thereof) and the writing life, best Austin dining and other destinations, and much more. For more on the story behind the story, see Follow the (YA) Reader and Secret Asian Man: Yoshi Kitahara and Feral Nights.