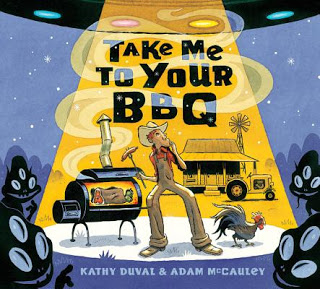 Stories ideas generally come to me in bits and pieces. Their arrival can be troublesome when I’m trying to concentrate on something else.

For example, when I’m watching a great movie and I don’t have any paper, and it’s too dark in the theater to write, anyway.

I lovingly collect the fragments I do manage to capture and am ecstatic when one sparks an idea for a story. Then I tune my antennae for other ideas to connect to it, so that writing can begin.

However, Take Me To Your BBQ (Hyperion, 2013) arrived fully formed. I was struggling with another project, wanting to put my head down and groan, when two lines popped into my head. “Yippee-ki-yi! Yippee-ki-yo! I think I see a UFO.”

This happened long before the movie “Cowboys and Aliens.” At that time, neither cowboys nor aliens occupied much of my cerebral territory. They’d simply appeared out of the blue— sort of like a UFO.

I laughed at my silly idea and spent the afternoon writing the story of a farmer named Willy and his encounter with little barbeque-loving green men.

Then I forgot about it.

I believe I initially dismissed this story because it came so easily. And it was in rhyme. Picture books in rhyme don’t sell. You know that, right?

I’m reluctant to tell this story because it reinforces a stereotype. People who aren’t writers often have the idea that all picture books are written in a single afternoon. 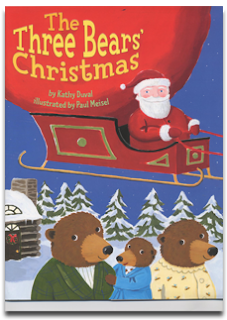 When I ask kids in schools how long they think it took me to write The Three Bears’ Christmas (Holiday House), the answers range somewhere between five minutes and two hours.

When I tell them I wrote seven versions, and it took a year, they are shocked. Even grownups don’t know that shorter doesn’t equal easier, unless they try to write a picture book themselves.

However, I decided to tell this story, because I realized I actually had been working on this book for a very long time. Writers are urged to write what they know, but writing is also a bridge that connects us to what we don’t know.

I’d spent years writing to build my bridge, and in a moment of magic, I got a ride across in the fast lane.

Now here’s the bit of serendipity. Six months later, on Jan. 8, I re-discovered that quirky little story. It made me laugh again, so I decided to polish it for submission. Several weeks later, I watched Larry King interview residents of Stephenville, Texas (including a farmer) who had sighted a UFO.

What a grand coincidence!

However, it was no coincidence when Disney-Hyperion chose Adam McCauley to illustrate Take Me To Your BBQ. His vision for this book was inspired.

A delight for a picture book writer is seeing what happens when “your story” becomes “our story.” After I cooked up this cowboy+alien+BBQ dish, the immensely talented Adam McCauley spiced it up and presented the plate with panache. 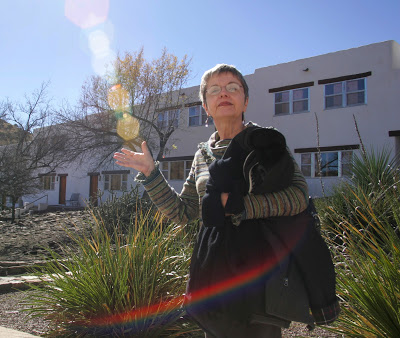 Enter to win a copy of Take Me To Your BBQ by Kathy Duval, illustrated by Adam McCauley (Hyperion, 2013). Publisher sponsored. Eligibility: North America.

7 thoughts on “Guest Post & Giveaway: Kathy Duval on Magic With a Bit of Serendipity”