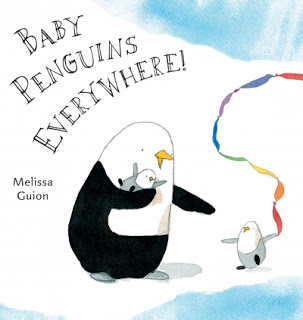 Melissa Guion is the first-time author-illustrator of Baby Penguins Everywhere! (Philomel, 2012)(blog). From the promotional copy:


Can there be such a thing as too many adorable penguins?


One day a penguin sees a most unusual sight: a hat floating in the icy water. Even more unusual? Out of the hat pops a baby penguin. But not just one baby penguin . . . or even two. But a third, and a fourth, and on and on!


At first the mama penguin is happy for the company. Until she realizes that taking care of a family is very hard, very tiring work, and what she could really use is just a moment alone. Yet as newcomer Melissa Guion reminds us in her adorable debut picture book, alone time is all well and good, but, it’s together time that’s best of all.


Perfect for any mama penguin with a family, or classroom, full of mischievous little ones.

Cynthia, I landed my first illustration gig in the 80’s: 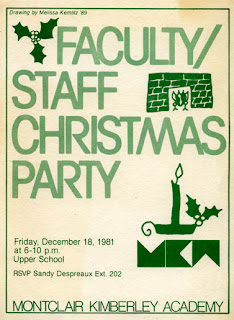 My mom gave me limited phone privileges, so I don’t know if it was ringing with offers after that.

Seriously, I’ve always written and drawn, but I only decided I wanted to
make children’s books about eight years ago. The first thing I did was
register for the New York SCBWI conference. 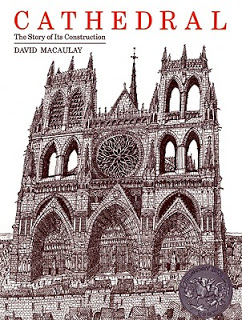 It was incredibly inspiring and demystifying. David Macaulay presented a slide show highlighting all the mistakes he made on his first book, Cathedral: The Story of Its Construction (Houghton Mifflin, 1973).

I left full of ideas and optimism. I figured, with a little luck, I could be working on a book very soon! The following day I sat down to draw. I drew for about half an hour, and then remembered I had to figure out what happened to the bathroom fixtures I’d ordered. I got an email that the rare funk record I’d listed on eBay had sold to someone in Brazil. Then I had a baby. A year passed.

It was not until late 2006 that I gave myself a real kick in the pants. I remember talking to my friend, the musician Jonathan Coulton, about a project he’d just finished called “Thing A Week.” He wrote a song a week, for a year, and posted all the songs on his website. He eventually made them into a set of albums. It had obviously been a great project for him.

I decided I would do the same thing with illustrations, in hopes of making some kind of progress. When I think back, I can’t believe how arbitrary the decision felt, because it ended up being one of the most important choices I’ve ever made.

In January 2007, I launched a blog called 52 Pictures, and committed to posting a new image there every Friday. The pictures themselves were important but so was everything around them. In addition to experimenting with drawing and painting styles, I learned to use Photoshop and HTML. I took part in collaborative projects. I began showing my work locally. I went to another SCBWI conference and displayed a painting in the show there, and SCBWI President Steve Mooser bought it.

The following year, I applied for and was awarded my first artist’s grant. These were major confidence builders. I used the grant toward renting my first studio, which didn’t pay for itself but gave me real space to work. 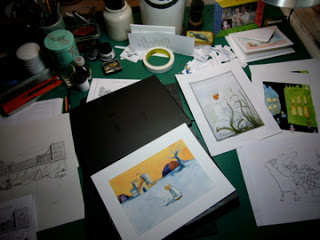 At that point I’d been talking for several years to a Writers House agent named Steven Malk. Steve saw my artwork in 2006 through a mutual friend. He really encouraged me to pursue writing and illustrating kids books. He would check in with me periodically, and his persistent confidence in me, right from the start, was very meaningful. I frankly didn’t know where it was coming from but I figured he had good reason for it.

In 2009, Steve and I decided to send around a little postcard announcing that he’d be representing me. I made very simple sequential drawings for the front and back. Steve’s response to the artwork was positive, though not effusive. A designer friend who helped me get the artwork ready for the printer was pretty unenthusiastic. I got very nervous for about 24 hours, wondering if I was about to make my professional debut with something people would ignore, or hate.

I sat in my studio that I couldn’t afford, and looked at the postcard for a long time. I concluded that I really liked it. We went with it and it was a big success. I got my editor and my first book contract directly from that card. To me, it represents the moment when I finally hopped out of the nest. 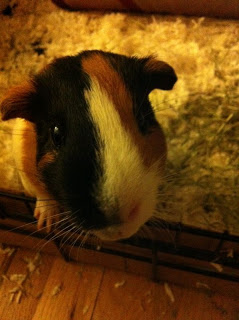 I like working with both words and pictures, but my apprenticeship as a writer has been longer and more complete. You might not guess that from my first book, with its grand total of 115 words, most of which are “the” and “penguin.” I wrote a lot when I was young. I liked it, I had a knack for it, and I was encouraged. I became an English major at Yale, which was initially frustrating for my scientist parents, but it was really what I loved, and they were ultimately very supportive.

After college I took a very business-y job, for financial reasons, but I always wrote for myself. Then a weird thing happened. In my early thirties I got really disgusted with my writing voice and stopped writing completely. I had no idea how long it would last and I didn’t care. If I bothered to pick up a pen, I would draw, often in an abstract way.

After about six months of that, I found myself starting to draw letters and words, drawing them as if they were line art, not thinking much about what I meant by them. I thought about how they looked. Sometimes a drawing would turn into words, or words would trail off into a drawing, and that’s basically how I got back to writing. My inner artist really bailed my inner writer out of a jam.

My apprenticeship as an illustrator was very different. I studied art a bit, at different times, and I wasn’t bad, but there were always people who could draw and paint circles around me.

When I decided to illustrate books as well as write them I signed up for studio art classes in anatomical drawing and figurative painting, and they made me totally insane. My goal was to make books, not to become Leonardo da Vinci. I stopped after a few classes (and yes, of course, they were helpful in the end). I focus on having an expressive line and I keep things simple. I love the looseness of watercolor, so I use that. I leave detailed rendering and sophisticated color palettes to the illustrators who are wonderful at those things.

I don’t have a lot of special advice for illustrators who want to become writers. Wait, there’s one thing: don’t read the chapter in Becoming A Writer (Tarcher, 1934) where Dorothea Brande insists you write every day at the same time, and says if you fail to write on schedule you should give up. If you’ve worked hard enough to become an illustrator, you’ve earned a free pass.) If you’re a writer who wants to illustrate, I say find out what you do well and develop it. If you’re not sure what that is, share your artwork with an artist friend and let them tell you what seems strong. Try not to be self-conscious. My drawing table is in my apartment and I used to keep it totally off limits. Now I let people in, casually or during open studio events. I share work in progress; I let people watch me draw. It’s not for me to say when a person is ready to bare their mess, but it’s true that once you do, things really start to move.

If you want to make picture books and haven’t been to an SCBWI conference, go.

Two great teachers whose classes did not make me crazy were Roger Winter and Sergio Ruzzier.

See my 52 Pictures artwork in my 2007 blog archive, starting here.