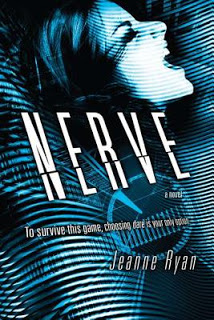 Jeanne Ryan is the first-time author of Nerve (Dial, Sept. 12, 2012)(author blog). From the promotional copy:

When Vee is picked to be a player in Nerve, an anonymous game of dares broadcast live online, she discovers that the game knows her. They tempt her with prizes taken from her ThisIsMe page and team her up with the perfect boy, sizzling-hot Ian.

At first it’s exhilarating–Vee and Ian’s fans cheer them on to riskier dares with higher stakes.

But the game takes a twisted turn. Suddenly they’re playing all or nothing, and the prize may be their lives.

This issue came up all the time in Nerve. Given that it’s based on an online game of dares that are supposed to draw in a large audience, the dares themselves had to be extreme enough to entice viewers and promote an uber-contemporary vibe. 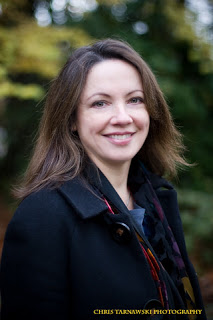 At the same time, I wanted my main character, Vee, to be a “normal”, relatable girl. The way I approached this was to fashion the dares with the mindset of a cynical game designer, but then show Vee’s reaction to performing each dare, revealing her mortification, trepidation and concern about the unsuspecting people who might be impacted by her actions.

This meant I often had to do battle between my innate desire to make things right with the world (I have a degree in social welfare) and wanting to ensure that the story felt authentic.

For example, one of the dares has Vee posing as a prostitute until she can get a high enough offer from a potential client. “Pretty Woman” notwithstanding, there’s nothing light or funny about such a situation and the plight of girls caught in that lifestyle.

Yet it’s the type of dare a cynical group of game designers might dream up if their motivation was luring viewers who’d pay to watch.

I tried to portray Vee’s experience during that dare as starting out with false bravado, which wilts as she encounters danger and rejection. At times, she empathizes with the women on the street who aren’t there as part of a game. Since this is a fast-paced thriller, I couldn’t delve too deeply into these issues, but they are brought up to provide some measure of balance.

Technology plays a huge role in this story in both the day-to-day interactions between the characters and in the mechanisms of the game itself. The dares in Nerve are captured on video via phones by both players and “Watchers,” and then broadcast on the net to be viewed on computers and phones.

Since I didn’t want to date the book, I tried to keep the technology as generic as possible, describing it more by function than name.

In the case where I did need a name for a ubiquitous social networking site, I called it ThisIsMe, which hopefully gets across the idea.

When it came to the phones, which are so integral in this book, I went with the highest common denominator, assuming that smart phones would become more the norm than they are now. So much so, that in the near future, they won’t be considered so “smart.” (In fact, there’s only one line where I refer to them as “smart” and that’s kind of a joke.)

The story simply presents kids whipping out their phones to take video and use the Internet. Another thing I was careful to do was say “phones” rather than “cell phones” since for most teens, this differentiation isn’t necessary, and, in my opinion, would already sound dated.

Of course, there’s no way to predict what’ll be available even a few years from now; nor would I since this is not sci-fi. So, like pretty much all contemporary fiction, aspects of this story will eventually become dated. All I could do was try to delay that as long as possible.