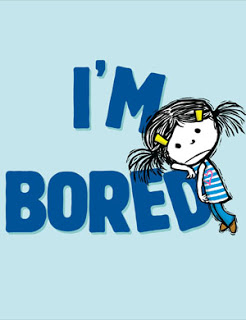 There is nothing boring about being a kid, but one little girl is going to have to prove it in this anything-but-boring picture book from comedian Michael Ian Black.

Just when a little girl thinks she couldn’t possibly be more bored, she stumbles upon a potato who turns the tables on her by declaring that children are boring.

But this girl isn’t going to let a vegetable tell her what’s what, so she sets out to show the unimpressed potato all the amazing things kids can do. Too bad the potato is anything but interested….


This tongue-in-cheek twist on a familiar topic is sure to entertain anyone who’s ever been bored—or had to hear about someone else being bored—and is filled with comedian Michael Ian Black’s trademark dry wit, accompanied by charismatic illustrations from newcomer Debbie Ridpath Ohi.


Was there one writing workshop or conference that led to an “ah-ha!” moment in your craft? What happened, and how did it help you?

Without a doubt, the conference that changed everything for me was the 2010 SCBWI Summer Conference in Los Angeles. I decided to submit one of my novels-in-progress for the manuscript critique consultation: a middle grade novel that had small illustrations imbedded throughout. Sadly, it was rejected because I had misread the critique rules.

Happily, rejection turned out to be a good thing. At that time, you could enter either the manuscript critique or the Portfolio Showcase, but not both.

An illustrator friend of mine, Beckett Gladney, suggested that I enter the Showcase and also helped me put my first portfolio together.

To my shock, I ended winning one of two Honor (runner-up) Awards for the overall showcase as well as being selected for the Mentorship Program, in which six industry experts each selected an artist whose portfolio showed promise.

The SCBWI Illustration Mentor who chose me was Cecilia Yung, who is Art Director at Penguin USA. I met with her as well as the five other Mentors (David Diaz, Rubin Pfeffer, Priscilla Burris, Pat Cummings, Bridget Strevens-Marzo). When we all met the following morning, we new Mentees were each asked to introduce ourselves and say what art training we had received.

When it was my turn, I had to confess that I had majored in Computer Science at the University Of Toronto and that I used to be a computer programmer/analyst.

Instead of looking down on me for my lack of art schooling, however, I’ve had tremendous support and encouragement from my Mentors as well as the other Mentees and have learned so much from all of them. I continue to be in touch with the other Mentees, and we launched our own website at KidLitArtists.com.

The conference was also significant because that’s where Justin Chanda found me. Justin is the publisher at Simon &Schuster in charge of three imprints: Simon & Schuster Books For Young Readers, Atheneum & Margaret K. McElderry Books. During the conference, Justin told me about Michael Ian Black‘s book, and that he thought I’d be the perfect illustrator.

Justin’s interest led to a book contract and then two more book contracts with Simon &Schuster. Working with Justin and Laurent Linn (S&S art director) has been a joy, and I have improved as both a writer and illustrator as a result. For those interested, I’m blogging about my experience working with Simon & Schuster Books For Young Readers.

But back to the “aha” factor.

I include the details above to help show how I came to certain realizations. They were particular to my situation, yes, but I list some of them below in case they help others out there:

As for getting my novels published, I haven’t given up. Last year, I submitted a YA novel-in-progress for the SCBWI conference manuscript critique, was hugely encouraged by Jen Rofé‘s feedback, and my manuscript was nominated for the Sue Alexander “Most Promising Work” Award. It didn’t win, but it was a sign to me that I should keep working on my novel projects in addition to picture books. 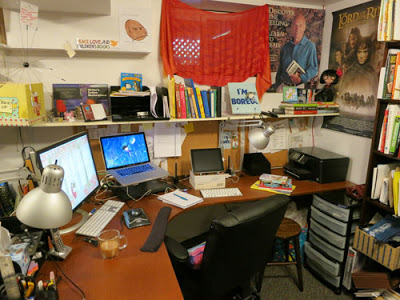 I’ve been writing and drawing forever. I wrote my first chapter book
when I was in second grade (see photo above). I recall being so excited
about using a new word I had discovered in the dictionary:
“horrendous.” Sadly, I managed to misspell it in my story, and it got
red-lined by my teacher. 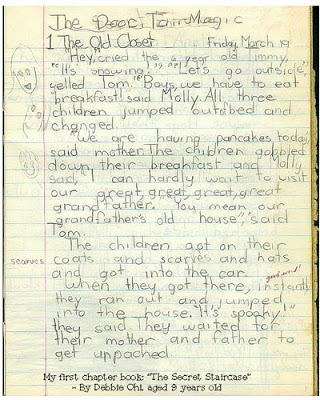 Although I’ve had a number of short pieces published in print and online venues as well as a book, my only published writing credit for young people so far is the illustrated short story I did for Tomo: Friendship Through Fiction: An Anthology of Japan Teen Stories, a teen anthology edited by Holly Thompson and published by Stone Bridge Press. 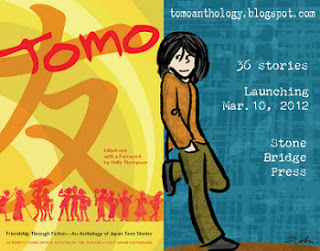 My first writing mentor was Lee Wardlaw, a West Coast writer, and I learned a great deal from her critiquing. Nowadays, my main writing critique group is MiGWriters.

In illustration, I’ve learned the most from my sister, Ruth Ohi. Ruth has over 50 books published, and her continuing support and encouragement have helped me so many times. More recently, I’ve gained much more knowledge about the craft and business of illustrating children’s books from Laurent Linn, my art director at Simon & Schuster BFYR. And as I’ve mentioned earlier, the SCBWI Illustration Mentorship Program has been amazing for both advice and mutual encouragement.

The biggest piece of advice I can give those who write and illustrate: let your inner artist and writer out to play regularly, together as well as separately.

I do some web comics purely for the fun of it, plus I try to do a daily sketch. Some I post online, some I don’t.

I think it’s especially important for illustrators to do regular aimless doodling. Some people knit or do other needlework while they watch a movie or listen to music at home. I doodle. You never know what your subconscious is going to do or how it’s going to express itself, and who knows? You may come up with a character idea or story fragment that could spark a project down the road.

How have you approached the task of promoting your debut book? What online or real-space efforts are you making? Where did you get your ideas? To whom did you turn for support? Are you enjoying the process, or does it feel like a chore? What advice do you have on this front for your fellow debut illustrators and for those in the years to come?

My approach to promotion mainly focuses on connections I’ve made in the past as well as new connections. I’m hoping that some of the people who have been following me via my blogs or social media feeds or past projects will be intrigued enough to buy the book or help me promote it via word-of-mouth. I’ve never been a big fan of the hard sell, though I know it does work for some people.

To clarify: my approach won’t work for everyone. I’m also not saying that this is the best approach — for the book to sell really well, it needs to sell to total strangers who have no idea who I am. For me, though, the more personal approach feels the most natural and suits my personality.

I’m lucky in that I have publicists and a marketing team at Simon & Schuster in the U.S. and Canada who are going to be helping promote I’m Bored, but I know there’s a ton I can do on my own as well.

My advice for authors and illustrators who have a debut book:

As for whether I’m enjoying the process of promoting I’m Bored, the basic answer is: yes. I do admit that I enjoy some types of promotion more than others. I’m not as comfortable with live interviews as I am with written, for example, and still get nervous when I have to do any public speaking in front of large groups.

But I’m super-excited about I’m Bored and very happy with how it turned out, and that makes promotion so much more fun. Here are just a few of the ways I’m promoting I’m Bored: 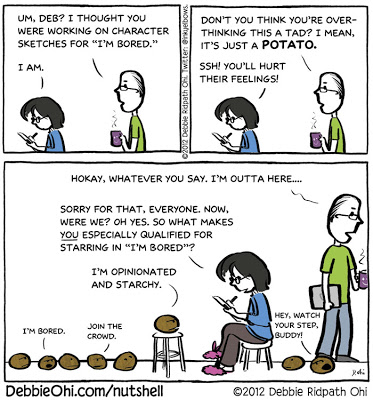 Greg Leitich Smith cheers I’m Bored: “With expressive illustrations and a hilarious point-counterpoint, a
little girl demonstrates that children are less boring than potatoes.
And there are waterfowl, too.  Really.”

Cynsations Canada reporter Lena Coakley
was born in Milford, Connecticut and grew up on Long Island. In high
school, creative writing was the only class she ever failed (nothing was
ever good enough to hand in!), but, undeterred, she went on to study
writing at Sarah Lawrence College.

Witchlanders, her first novel, was called “a stunning teen debut” by Kirkus Reviews and was the winner of the SCBWI Crystal Kite Award for the Americas region. She is now a full-time writer living in Toronto.