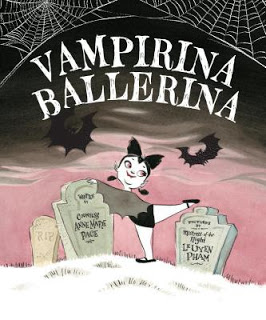 Anne Marie Pace is the author of
Vampirina Ballerina, illustrated by LeUyen Pham (Disney-Hyperion, 2012)(author blog). From the promotional copy:

Oh, to be a ballerina! It’s a challenge for any little girl, but even more soif one happens to be a vampire like Vampirina.


Could you tell us about your writing community-your critique group or partner or other sources of emotional and/or professional support?

I’ve been writing–sometimes intently, sometimes merely piddling–all my life, but I don’t think it’s a coincidence that my writing became more directed and more serious after I started connecting regularly with other writers, both online and in-person, about ten years ago.

As far as the online world goes, it’s been a great gift to writers in recent years–at least from my perspective–that the internet has allowed us to associate in ways we could not have done in the past.

Among non-writers, I’m fairly shy, but as writers go, I’m pretty much an extrovert; and I know I’d be miserable working alone at home without being able to reach out to writer friends during the day.

As far back as the mid-’90s, my husband and I belonged to a now-defunct online-service called GEnie, which had writers’ round tables. After GEnie went out of business, the children’s writers formed a new listserv called WRT4KDZ. Throughout the years when my kids were young, I clung to WRT4KDZ as if it were a life raft; even though I was hardly writing at all, even when I didn’t read the posts for weeks or even months, belonging to that group symbolized the knowledge that real people make a go of this writing gig.

Books don’t just appear; people have to write them–and maybe I could write one, too.

As my children grew older, I was able to write more; simultaneously, social media was evolving, and my online community grew. I’ve been part of the Yellow Board, various genre-based listservs, and LiveJournal; and I’ve been a member of the Blueboards since the very first day; in fact, I spent about six years as one of the Blueboard administrators.

I also have a wonderful writers group online, the core of which are writers who met on the Blueboards. And of course, now we have Facebook and Twitter. The format may be different, but the intent is the same: forging connection, support and friendship. 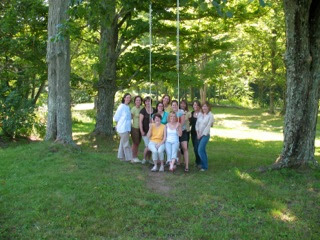 In person, I have to credit almost all my connections to SCBWI and the Highlights Foundation’s Workshop at Chautauqua. Some of the members of the WRT4KDZ group I mentioned above encouraged me to join SCBWI.

As soon as I received the red roster (a book SCBWI used to send out with names and addresses of members), I started poring through it for local members to have coffee with (the introverts reading this are cringing, I know, but I needed writer friends).

My first regional conference, in 2002, I knew no one. The next year, I volunteered and began organizing local SCBWI events; and from there it snowballed. Now, ten years later, when I walk in the door at the Mid-Atlantic SCBWI conference, it’s like coming home.

My early picture book manuscripts, like those by other beginning writers, were full of description, leaving little room for the illustrator’s imagination.

In fact, one called “The Tutu Store” was all description; there was no character, no plot–just paragraph after paragraph of setting.

I was convinced it was brilliant; after all, it was poetic, with alliteration (“spangly sparkly sequined skirts”) and onomatopoeia (“tappety-tap clicky-thump-clacky-thump tap shoes”) and I could visualize the illustrations in my head. That was enough, right?

Of course I was completely off-base.

Then one night, I was working on one of those manuscripts before bed. While I slept, I guess my subconscious went to work, because in the morning, in that gray haze between sleeping and waking, an entirely new opening popped into my brain, one that was shorter, snappier, and full of repetition. It was a huge moment of change for me as I realized I was doing picture books all wrong.

At that point, I headed to the library to find books–not just to read to my kids, but to study. I think my former-English-major self kicked in here, because I started analyzing texts in terms of the functions of different elements. Okay, yes, picture book texts can be poetic, but what does that alliteration accomplish in a read-aloud? Why does onomatopoeia appeal to young children? And of course, how do you fully develop a character and tell her story in 500 words?

Five years ago, I began working with my agent Linda Pratt. Linda took me on for a novel we didn’t sell, but she was interested in working with me on my picture books as well, and we’ve worked together over the years on a number of picture book manuscripts.

Linda represents many illustrators and author-illustrators and is tremendously keen at knowing what can and should be left out of picture-book text. I’ve been blessed to have her editorial tutelage over the years in that regard.

I also learned a lot from reading author-illustrators like Holly Keller, Pat Hutchins, and Kevin Henkes.

I think that’s silly–be aware of that, yes, but don’t shut out an entire category of wonderful books just because you yourself can’t draw.

I know I’m a little biased, but I think you can tell from a book like Vampirina Ballerina, with LeUyen Pham‘s amazingly detailed, story-telling illustrations, what a talented illustrator can accomplish with a spare text.