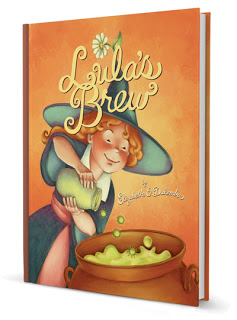 Hardcover, paperback, ebook, app. Today we have more ways to enjoy our books than ever. And I’ve explored them all with my picture book Lula’s Brew.

The book began its life as a picture dummy that, despite winning the Grand Prize in the SmartWriters competition way back in 2007, didn’t sell to a major publishing house. I tucked it away in a drawer until the invention of the iPhone app in 2009. Something told me they were going to be big and Lula was the perfect fit – short, funny, the sketches were finished.

I pulled her out, dusted her off, and turned her into an app – just in time for Halloween.

Back then, Lula’s Brew was one of the very first picture book apps, so she got fantastic exposure. She was featured in the iTunes store for months, as well as on the popular blog “Moms With Apps.” When the iPad came out, I adapted her for that device too and she ended up being downloaded over 10,000 times – pretty good!

I had created something new and people wanted to know about it. I sold articles to trade magazines, did some very high tech school visits, and spoke at various conferences about creating apps.

But as the app world became overrun, and iTunes’ search engine failed to improve, I began to have my doubts about apps as a viable money-making option for picture books. I turned her into an ebook for the Nook and Kindle just to be sure. But again, the chance of a reader stumbling across her online was nil.

And all the while, Lula fans were emailing me asking, “Where can I buy the book?”

In this world of reading transition, the need for picture books as physical page-turners has not diminished. My little cousins use my iPad to play games – for them, it’s not a place to read. A book is where they do that – still. And I don’t see that changing.

I considered self publishing. But I am well aware of the work involved in becoming a publisher and distributor – it is no small task. And besides the upfront cost of creating a quality print picture book, when would I ever have time to write and illustrate again?

So when I read in Shelf Awareness (July 26, 2012) that a little publisher out of California, Xist Publishing, was taking picture ebooks and turning them into apps, I got in touch immediately. They flipped over Lula’s Brew and now, finally, she is a book. ‘