On September 15, 1963, 49 years ago today, three racist vigilantes—one of them nicknamed “Dynamite Bob” because of all the bombs he lobbed—blew up Sixteenth Street Baptist Church in Birmingham, Alabama.

For the previous six months, this church had been the headquarters for civil rights protests, which, in July, had finally forced the city to rescind its onerous Segregation Ordinances.

The resulting blast killed four black girls and blinded another.


In my book, We’ve Got a Job: The 1963 Birmingham Children’s March (Peachtree, 2012), I describe these events through the voices and experiences of four young activists.

In explaining how I found—and cajoled the life-stories from—the “main characters” in my debut middle-grade nonfiction book, We’ve Got a Job: The 1963 Birmingham Children’s March (Peachtree, 2012), I’ve often said that I felt like a telephone insurance salesman or a door-to-door Ginzu knife pusher, making cold calls.

“Hello. My name is Cynthia Levinson, and have I got a deal for you! Just tell me every embarrassing detail about yourself, and, if I find a publisher, I’ll make you infamous.”

Why would any sane person, outside of reality TV, sign on to this crazy deal? Why would anyone agree to spill all to a novice writer in exchange for nothing, not even a vegetable peeler?

The four main interviewees—Audrey Faye Hendricks, Washington Booker III., Arnetta Streeter Gary, and James W. Stewart—would answer that they wanted young people today to know how they and over 3,000 other black children in Birmingham, Alabama had marched and gone to jail to desegregate what Dr. Martin Luther King, Jr. called the most racially violent city in America.

I suspect that, when they agreed to talk with me, they had no idea how many of their secrets, some held for nearly 50 years, would be revealed in the telling.

In 2004, Terry Gross, the host of National Public Radio’s Fresh Air, published a collection of the interviews she conducted for the program in a book called All I Did Was Ask. Such a deceptively tongue-in-cheek title!

As Gross acknowledges in her Introduction, “I violate many rules of polite conversation in my interviews.” As an avid listener to Fresh Air, I can attest that she poses decidedly impolite inquiries but she does so deftly and effectively. As a result, her interviews often elicit, as she intends, “a revelation about my guest’s life.” Her techniques are all the more remarkable, given that her interviews last barely more than an hour.

If I replayed mine, on the other hand, end-to-end, they’d go on for days, possibly weeks. Unscrolled on pre-digital audiotape, they might stretch from Austin, where I live, to Birmingham. Unlike Terry Gross, I am an inefficient interviewer. One reason is that I wait. And, I wait. And, I wait.

During one of our early telephone conversations (I didn’t meet James until a year-and-a-half after we started talking), the volume and timbre of James’ voice suddenly dropped as he said, slowly and huskily, “The conditions in the jail were deplorable. Just. Deplorable.”

I could almost hear him shake his head as he recalled his astonishment and dismay at how he and the other teenaged prisoners were treated by the all-white Birmingham police force.

I waited for James to say more. But, my usually candid and eloquent interviewee seemed strangled. And, being a coward, as Gross admits she is, I choked up, too.

I couldn’t cough out the next obvious question and waited almost six months before I was ready to wind back to, “In what ways was the jail deplorable?” His responses were shocking.

But, like my eventual question, they were necessary to tell his story. “Deplorable” is an apt description but it is not a telling detail.

James’ explaining to me that his cell, which was built to accommodate 75 prisoners, was packed so tight with 300 to 400 young males that “we had to sleep in shifts [while] the rest stood around the walls” hits the reader between the eyes.

In researching and writing We’ve Got a Job, I knew that assertions require evidence, and statements beg for examples. The only way to uncover them, I learned, is to dig deep.

What, I wondered, for instance, did Wash Booker mean when he mentioned, over brunch at a pancake house, that he was a bad boy?

It meant, he told me when I finally asked, that “while everybody else was peacefully marching…we were more interested in hitting the policemen in the head with a rock.”

It meant, “burn anything the white folks owned.”

It meant, “Anything we could get our hands on owned by white folks, we destroyed it.”

All of which meant that, as a white writer, I also had to ask this man who was sharing so much with me that I had come to think of him as a friend, “Do you still hate white people?”

I flung many other tough questions from my arsenal. I had to ask Arnetta, a very decorous retired mathematics teacher, if she had lied to her parents about her activities in the civil rights movement. I had to ask Charles, a white interviewee, if his father ever stopped being a racist.

Above all, I had to ask myself: Why, as a teenager, like Arnetta, Wash, and James in 1963, did I timidly read articles in the newspapers about their courageous actions but never once considered joining them to protest segregation? Had I been prejudiced, too? Or, was I merely passive?

Does the difference between attitude and action (or, more accurately, inaction) matter? And, what residue of either of these remains within me? To what extent have I exorcised prejudice and inertia by writing We’ve Got a Job, thus fulfilling my new friends’ desire to share their stories with young people today?

Tough questions, apparently, begin at home. And, I often wondered, during the more than three years I obsessed about the book, about my own motivations and persistence.

In the end, I think it was not so much exorcism as trying to make amends. 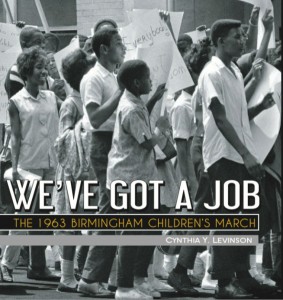 Although my questions to others were, not infrequently, impertinent, they paid off in ways I didn’t anticipate not only for my readers but for me as well.

Gross observes that “When an interviewee clams up, it’s sometimes out of fear that the journalist he’s speaking with won’t fully comprehend what he’s saying or simply won’t care…[A] guest is more likely to share his innermost thoughts with someone he senses has a good grasp of what he’s all about.”

While several people got angry with me during our conversations, only a few people clammed up—because, they said, they plan to write books of their own. Certainly, Audrey, Arnetta, James, and Wash did not go silent. And, I would like to think that that’s in part because they know I comprehend, and I care.

As a result of what they shared with me, I learned much about their innermost thoughts—about the paramount place of God in their lives, for instance, about the spiritual basis of the Civil Rights Movement, about the values in their lives both before and after the desegregation that they brought about. James, in particular, patiently explained to me the nuances of racism that he still perceives today through careful listening and observation.

In a turn-about-is-fair-play move, I’ve also been interviewed since the book was published. Two radio program hosts, one black and the other white, in Grand Rapids, Michigan; asked me what I learned during this journey. In addition to the lessons I just mentioned, I also confessed that, thanks to the four, I now recognize that I have been in denial about the extent to which racism persists.

In my efforts to make amends, I’ve tried to remain not only attuned but also active in confronting prejudice and discrimination. It is in this way that my investigations have paid off in unanticipated ways—by changing me.

I opened by raising the question of why anyone would want to be interviewed, especially when the interviews are probing, and the “victim” receives nothing in return.

Happily, Arnetta, Wash, and James have told me that, in fact, their innocently signing on to this project has benefited them, too. (Audrey died in 2009.)

Arnetta has had many conversations with her grandson about her involvement in the movement and encourages him to be an activist. (She also warns him not to lie to her the way she lied to his great-grandparents!) Wash is becoming a motivational presenter and public speaker about civil rights. And, James, who cried while talking about the jail at a presentation we made together to sixth-graders, is finding solace through sharing his stories.

I console myself with these outcomes not only for the time and anguish I extracted from the four of them but also because I’m doing it again. Stay tuned for news of my work in progress, for which I’m relentlessly interviewing young circus performers.

I wonder what they and I will learn about ourselves and how we will change from the process.

New Voice: Cynthia Y. Levinson on We’ve Got a Job from Cynsations. Note: Cynthia talks about a transformative writing workshop and how she framed her research.

6 thoughts on “Guest Post: Cynthia Y. Levinson on Can You Really Ask That in a Children’s Book?”