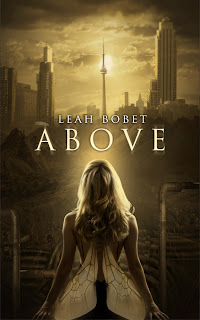 Leah Bobet is the first-time author of Above (Arthur A. Levine/Scholastic, 2012). From the promotional copy:

Matthew’s father had lion’s feet and his mother had gills, and both fled the modern-day city to live in underground Safe, a secret community of freaks, ghost-whisperers, and disabled outcasts hidden beyond the subways and sewers.

Raised underground, Matthew is responsible for the keeping of both Safe’s histories and the traumatized shapeshifter Ariel, the girl he took in, fell in love with – and can’t stop from constantly running away.

But Safe is no longer safe: the night after a frightening encounter in the sewers, Safe’s founder Atticus is murdered by the one person Safe ever exiled: mad Corner, whose coup is backed by an army of mindless, whispering shadows.

Only Matthew, Ariel, and a handful of unstable, crippled compatriots escape to the city that cast them out; the dangerous place he knows only as Above.

Despite Ariel’s increasingly erratic behaviour and with the odds against them, Matthew must find a way to rescue Safe from Corner’s occupying army. But as his quest leads him through abandoned asylums and the dregs of urban poverty, Matthew discovers that the histories he’s devoted his life to aren’t true: Corner’s invasion — and Ariel’s terrors – are rooted in a history of Safe much darker and bloodier than Matthew ever imagined.

And even if he manages to save both home and Ariel, he may well lose himself.

Was Above’s 2012 debut a surprise, or inevitable? Actually…kind of both! 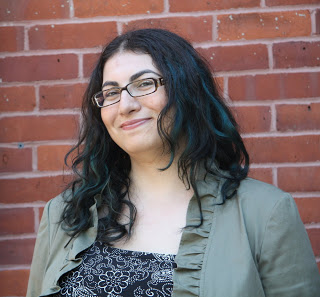 I’ve been writing with an eye to publication – instead of writing because it was fun and I liked it, which also used to happen – since the summer of 2001.

I was 19, taking a year off between high school and university, and stumbled across an idea for a story – the first I’d written since I was a kid.

In retrospect, the story was pretty terrible (no, you may not see it!), but it was the gateway to two things: joining the Online Writing Workshop for Science Fiction, Fantasy, and Horror, where I met a group of writers who have been not just critique partners but the best kind of friends, and my first publication, in a tiny online magazine that stopped publishing years ago.

Being 19 and having just sold the first short story you’d written does a thing to you (where “you” equals “me”). It made me horrifically cocky: dead certain that, yes, I could do this, and no matter how long it took me to learn the skills and craft I needed to sell a novel, I was going to be a writer.

No, scratch that: I already was a writer.

Other people looking at me then were probably rolling their eyes. But I needed that arrogance: if I’d known how long the path to selling that novel was going to be – how much work it would mean, how much I still had to learn, and how much I was going to reorganize my life to make it happen – I would have probably looked at that goal, decided it was too far and too much, and gone and done something else instead.

That illusion of soon gave me an approach to writing that was optimistic and confident and actually, really healthy: of course I was going to make it. I just had to work hard, and commit myself to my work, and one day, it would come.

I worked out of that quiet confidence for years.

I signed on to one online magazine, Abyss and Apex, and then another, Ideomancer Speculative Fiction, as a slush reader, and learned things about what make stories work or break.

I talked to other writers constantly, comparing techniques and ideas and theories, and more importantly, trying them out. I went to my first conventions and learned things sitting on both sides of panel tables. I gave critiques to my friends, and got critiques from them, and looked at their ideas, and listened.

It took three years to make my first two professional-rates sales – and yes, the first two pro market acceptances showed up in my inbox six hours apart. And then after that, professional sales came steadily, and so did Year’s Best anthology reprints, and the occasional anthology invite, but it still took five more years of learning and drafting novel manuscripts (and finding the holes in them, and revising them or scrapping them to start again, or deciding 30,000 words in that this idea was stupid and never mind that), before I managed to turn out a book that got me an arts grant and an agent both.

After two more revisions, Above went out looking for editors in October 2009.

It got a lot of rejection letters.

They were really, really nice rejection letters: Editors who liked the manuscript but couldn’t place it, or took it to their editorial meetings and couldn’t get it through to a “yes”.

But they were nonetheless rejection letters, and by the time we got to January, I realized something: I had done my absolute best, said all the things I wanted to say in the way I wanted to say them, and maybe that wasn’t going to be good enough. Maybe this wasn’t going to happen, and I would have to be okay with that, and do something else with my life.

So, I very quietly gave up. I mourned the idea of being a novelist, took my self-worth out of that particular basket, and started getting more involved in other things: urban agriculture; city politics; indie music.

And then the April after, when I’d mostly moved on? The book sold.

So, Above’s publication this year was in some ways, as inevitable as winter: nine years of hard, targeted, sincere work to make that thing happen. But it was also the biggest surprise I’ve ever had – one it took me a whole summer to get over – and parts of it keep surprising me to this day!

It’s also changed how I look at writing and who I am because of, or without, it: I work hard on learning craft, and I work on projects because I love them.

I love making fiction: it’s like being a glass and having someone fill you right up. But I don’t need to publish anymore to be a complete person, and in some ways, that’s made my relationship with writing a better one: since giving up on that idea of myself as A Writer ™, I write better and more honestly – because I’m doing it for the right reasons again; the reasons that are good for me as a whole human being.

I’ve been a fantasy reader since I was first able to read, thanks to my parents’ bookshelf: my mother’s an engineer and science fiction writer who had a solid collection of fantasy novels.

In fact, I work part-time in a science fiction and fantasy bookstore, and we have a joke that the first signing I attended there was when I was negative-six months old: My mom saw Frank Herbert, the author of Dune, there when she was pregnant with me!

So I spent my childhood either reading every book in the school library (and that meant mythology, folktales, Agatha Christie novels, but also a serious helping of Lloyd Alexander, Madeleine L’Engle and Susan Cooper) and then every book I could squeeze out of relatives for my birthday, and then when I ran out of those, the books in my mother’s bookshelves. That’s where I found Peter Beagle, Patricia McKillip, and probably every Latin American magical realist writer ever translated into English, and I ate that stuff up.

Why, though, is a good question. Why those books and not other ones? Because believe me, I was reading other ones too, and still do: literary fiction, detective noir, horror, science fiction, YA…

I think my love for fantasy novels comes from the same place that my love for cities does: The idea that the world is big and bright and wide, and anything can happen.

Fantasy stories, even when they’re dark, are still at their heart about how staggeringly, amazingly possible everything is. They take this amazing glee in being beyond the edges of not just our everyday lives but their protagonists’ everyday lives. They’re the sheer pleasure of going exploring, and finding secret surprises, and seeing what’s there just because it’s there. Which is a wonderful way to look at the world.