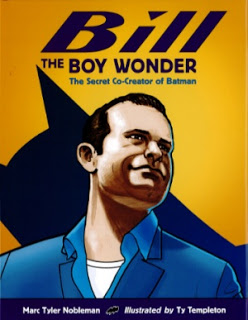 The Internet may be endless, but it’s incomplete.

Whenever I tell an audience (whether young or adult) that you can’t find every answer online, the skepticism in the room is usually palpable. Some people seem unable—or simply unwilling—to process this.

It’s as if I told them that we just found out that the planet we live on is actually Mars and it’s time to redo our return labels.

If I as a writer of nonfiction want to give my readers facts or anecdotes that they can’t find elsewhere in print or pixels, I must unhook my digital leash and venture into the real world. After all, if someone already put it on the Internet, it isn’t new information, is it?

Original research is, of course, labor-intensive, but that makes any gold mined all the more shiny. Here are three ways I found information that even the goliath Google could not have helped with (and all for a picture book!):

Staking out a New York City apartment building. When I began researching Bill Finger in 2006, my priority was talking with people who knew him personally, especially the ones who were not in comics (AKA the ones no one interviewed before). It would be a challenge to find many living contemporaries because Bill was born in 1914 and died in 1974.

But his first wife Portia died in 1990—recently enough that someone who knew her might still be in the building where Portia lived at the time of her death.

One summer evening, I stood outside that building, waiting for someone to come in or out. When a woman came home from work, I asked if she knew which resident had been in the building the longest. She put me in touch with the super, and next thing I knew I was sitting in the living room of a woman in her seventies—and in her nightgown, even though it was only 6 p.m.

Trying doing that online. (Well, better don’t.) She gifted me a few memories of the Finger family that only a neighbor would know.

Ping-ponging between the surrogate’s court offices of three of the five NYC boroughs.

That same summer, I was on a quest for the will of Bill’s only child, Fred, who died in 1992. Wills, I was surprised to learn, are public record. But I didn’t know if Fred left one, and if he did, where.

I started in Manhattan, then zipped over to Queens, then Brooklyn, where neither “Frederic Finger” nor “Fred Finger” yielded results.

Yet oddly, when I searched only “Finger,” he turned up. The lone document in his file was a settlement of estate, and the lone name within was one I’d not heard from anyone I interviewed.

The buried story that document revealed: someone was discreetly getting Finger Batman royalties after Fred died…but not a Finger. This discovery would have significant repercussions for both my book and for the family. 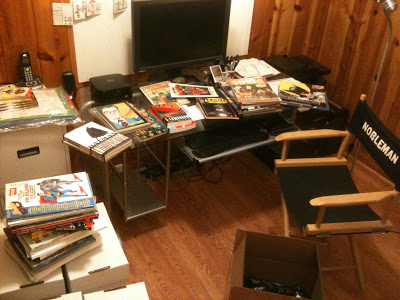 Poring over hundreds of (non-digitized) photos in three Cleveland locations.

Most people have not been inside the Cleveland house where Jerry Siegel lived when he created Superman and, therefore, would not be critical of visual inaccuracies in Boys of Steel. However, I still wanted to be able to say “That’s how it really looked.”

So I showed up there one day in 2007 to ask the current residents (no longer Siegels) if I, a total stranger, could come inside to take photographs for illustrator reference. (They said yes. I am not intimidating.)

But finding an image of the small apartment building in which Joe Shuster lived at the time proved considerably harder. It was torn down decades ago; since apparently no one knew its cultural significance, it had not been properly documented beforehand. 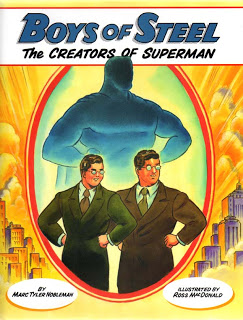 At the historical society, it took me all day to go through the boxes of archival photos mounted on cardstock. No luck. The next day, I scoured the photos (stored in manila envelopes) at Cleveland State University. No luck.

Finally, without much optimism, I checked the public library, where the photos were filed in recipe boxes. Yet it was there where I finally found my quarry: a shot of a rundown building taken just before its 1975 demolition—and 42 years after Joe first drew Superman there.

Whether looking for people, documents, or photos, at some point you’ll need to switch a screen for a street, trade up pounding the keyboard for pounding the pavement.

Yet the Internet remains a powerful research tool, in particular for a reason easily overlooked because it is so obvious: it gives each of us some degree of access to everyone else.

In other words, you might not know where to hunt, but chances are you can find someone who does—and reach him instantly. When I wanted to confirm or debunk a persistent rumor about Hitler personally banning Superman comics on the floor of the Reichstag, I checked a bunch of books and found no mention. But I wanted to be sure so I e-mailed a bunch of professors of German or WWII history. This led to a bounty of expert input tailored precisely to my need. (Incidentally, the consensus was that Hitler had done no such thing.)

Now all of the above behind-the-scenes information on the minds behind our masked marvels is online.

Because I put it there.

Children’s-YA Authors/Illustrators Dressed as Superheroes by Marc Tyler Nobleman from Noblemania. Peek: “Welcome to the first known gallery of children’s/YA authors and illustrators in superhero costumes (a few got in on a technicality).”

Every Batman story is marked with the words “Batman created by Bob Kane.” But that isn’t the whole truth. A struggling writer named Bill Finger was involved from the beginning. Bill helped invent Batman.

Despite his brilliance, Bill worked in obscurity. It was only after his death that fans went to bat for Bill, calling for DC to acknowledge him as co-creator of Batman.

4 thoughts on “Guest Post & Giveaway: Marc Tyler Nobleman on Further Than a Google Away”