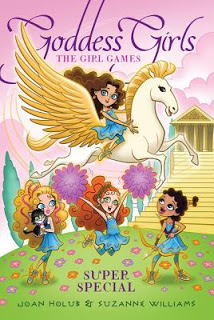 The first-ever standalone superspecial in the Goddess Girls series—let the games begin!

Athena, Medusa, Artemis, and Persephone are sick and tired of being left out of the annual boys-only Olympic Games. Their solution? The Girl Games!

But as the Goddess Girls work to make their dream into a reality, they come up against plenty of chaos and competition.

Told in alternating points of view, this superspecial is packed with Olympic spirit!

“…a clever take on Greek deities…”
~ Booklist
“Readers familiar with Greek myths should get a kick out of this plucky restaging.”
~Publishers Weekly
“…an enchanting mythological world with middle-school woes compounded by life as a deity…”
~ School Library Journal