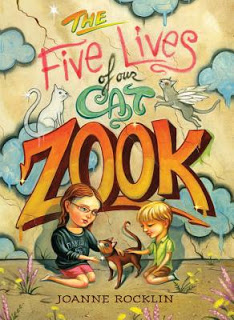 As I worked in my basement office on my new middle grade novel, The Fives Lives of Our Cat Zook (Abrams, 2012)(sample chapter), my hair was a mass of sticky cowlicks, paper was strewn on tables and floor, and the air smelled of coffee, sweat and dog.

Upstairs, I am an obsessively tidy housekeeper, but downstairs my office is a mess, as are my drafts, and, okay, my person. Sort of like the Superego and its Id.

When I first began, I had a vague idea for a story about a girl and her brother and the stories the girl tells about their sick cat’s “other lives.” I was aiming for laughter and tears in one book, as I always do. That’s all I knew at the beginning.

Many months and many words later, I stared at my final draft and a familiar feeling came over me. Lo and behold, a complete and sensible story had appeared on my computer. Out of nowhere! Or from a place entirely outside my cluttered office and messy imagination, it seemed. It was the same astonished, rather embarrassed response I usually have when I finish a novel. How did I write that?

I am often asked a similar question when I emerge from my basement to greet the real world, i.e. Where do you get your ideas?

I knew I’d better come up with some honest, helpful answers because, after all, my book is about stories. And not only that, my plucky character Oona, prone to sharing interesting theories about fibbing (My Rainbow Whopper Theory) and relationships (My Hope of the World Theory) and longings (My Wishing Theory), had ended her story with a gift to the reader, her eight-point Theory of Story-Making.

I happen to believe strongly that writing is the same process for everyone, old or young, published or unpublished. And every time I begin another book, I have to remind myself how to do it. So before I begin my next project, I will consult Oona’s eight-point Theory. I now realize it contains everything that’s important to me about the writing process, especially Points 3, 4, and 5.

Point 3: You make a story yours by taking pieces of your world and putting them in your story to make a whole other world. These pieces are called details.

Point 4: A story doesn’t have to be true, but it does have to be real. That makes it truly a story. So even if it’s a fantasy, try to make the whopper-getter (the reader or listener) believe it could really happen. That’s where details help.

Point 5: The more you tell or write your story, the more you want to add some details to it. That’s okay. Each time you complete a new version of your story, that’s called a draft. Details are like jigsaw puzzle pieces, helping your drafts become whole.

By the way, the underlining is mine, not Oona’s. Obviously, for both of us, it’s all about the details. Details are more important than character, plot, and theme, or setting, it seems to me.

Actually, it is the details that create character, plot, theme and setting. They are the tiny atoms contained in all of these, and the energy that propels the story.

Perhaps the true question to be asked is, “Where do you get your dreams?”

For me, beginning a story is like plunging into a messy “waking dream” of disconnected details. My sleeping dreams are also filled with various flotsam and jetsam. Some of the details of both kinds of dreaming come from my “real life.” Other details arrive seemingly from nowhere, or they float up from a deep, dark place filled with memories, other people’s stories, hidden longings. And in both cases, a part of my brain is working furiously to make sense of it all.

Here’s what happened in The Five Lives of Our Cat Zook. 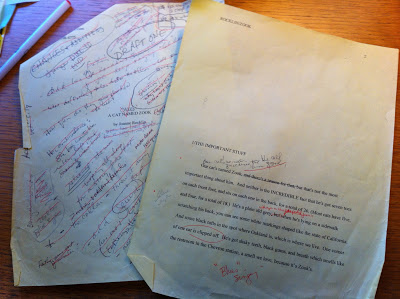 On the very first page of my very first draft, I began with a description of Zook, using specific details to make my writing realistic and interesting: Zook was howling his heart out in an alley in back of a pizzeria, where flowers once grew in the now empty, blue pots, when the children’s father was alive. This unusual cat had extra toes on each paw. His eyes were blue, like old, faded jeans. He had black gums and shaky teeth and a BB gun pellet lodged under his skin. A tag on his collar had a diamond on it, which the kids hoped they could cash in for gobs of money, until, sadly, they found out it was a fake.

Details, just details. Just me noodling around, using as many details I could think of to get my story going, not worrying about where the details came from, or where they would lead. I grabbed onto more details as I wrote my way through successive drafts. But—and this is the key—most of those random details miraculously joined up to create important nuggets or hints of character, plot, theme or setting.

A cat’s howl echoed the joy and sadness of a guitar-player’s blues tune, which, in turn, reminded Oona of life’s bittersweet moments.

Empty, blue pots brought memories of a happier time , and led to an urban gardening project which healed a relationship.

Extra toes inspired a tale of a kingdom saved.

A BB gun pellet became the sadness we can’t wish away.

And a diamond Wishing Object brought tears of joy, “as beautiful as diamonds.”

Of course, you will have to read the whole book to fully understand how all the details completed my story, like pieces of a jigsaw puzzle.

Patricia Hampl, in one of the best essays on writing I have ever read, “The Lax Habits of the Free Imagination”, writes that “Life is not a fixed star, not a unity. It makes sense that stories, for all their apparent seamlessness, should be formed of smashed, discarded bits.”

I try mightily to make sense of my night dreams while sleeping. I always fail, and frankly, don’t care by the light of day. I have better luck with the waking dreams reflected by my rough drafts.

That’s because I really love rewriting. I hone my drafts as best as I can with my knowledge of craft: narrative and character arcs, tension and cliff-hangers, pacing and balance, etc., etc.

But it’s the “smashed, discarded bits” that I begin with and hold onto, draft after messy draft, as I scribble away in my messy basement. I’ve developed a crazy love for that mess, realizing how important it is. And a crazy faith that everything will make sense, the details bumping into one another and then, finally, finally interlocking, to solve the puzzle of my story.

Enter for a chance to win a picture book critique or first-chapter critique for a middle grade novel (ages 8 to 12) by Joanne Rocklin, emphasizing “sparkly details.” To enter, comment on this post and include an email address (formatted
like: cynthia at cynthialeitichsmith dot com) or a link to an email address. Or you can email Cynthia directly with “Joanne Rocklin critique” in the subject line. Author sponsored. Eligibility: U.S./Canada. Deadline: 11:59 CST May 14. Note: please indicate if you’re entering for a critique/book or both.

And enter to win one of three copies of The Fives Lives of Our Cat Zook by Joanne Rocklin (Abrams, 2012). To enter, comment on this post and include an email address (formatted like: cynthia at cynthialeitichsmith dot com) or a link to an email address. Or you can email Cynthia directly with “The Five Lives of Our Cat Zook” in the subject line. Author sponsored. Eligibility: U.S./Canada. Deadline: 11:59 CST May 14. Note: please indicate if you’re entering for a critique/book or both.

19 thoughts on “Guest Post & Critique/Book Giveaway: Joanne Rocklin on the Power of the Detail: from Diamond to Tears of Joy”