David and Charlie are opposites. David has a million friends, online and off. Charlie is a soulful outsider, off the grid completely. But neither feels close to anybody.

When David’s parents present him with a hot Companion bot designed to encourage healthy bonds and treat his “dissociative disorder,” he can’t get enough of luscious redheaded Rose –and he can’t get it soon. Companions come with strict intimacy protocols, and whenever he tries anything, David gets an electric shock.

Parted from the boy she was built to love, Rose turns to Charlie, who finds he can open up, knowing Rose isn’t real. With Charlie’s help, the ideal “companion” is about to become her own best friend.

In a stunning and hilarious debut, John Cusick takes rollicking aim at internet culture and our craving for meaningful connection in an uberconnected world.

The only way I can stay productive is through force of habit. Six days a week, two hours a day, I write. When writing a first draft, I shoot for five pages a day, usually completing three to seven.

My weekly day off usually isn’t planned; I just write until life happens and I have to run an errand or catch up on sleep instead.

I don’t believe in waiting for inspiration to strike. I’ve trained my brain to get inspired around 8:30 every morning, usually after the second or third cup of coffee. And when I’m not inspired, I just start putting words on the page until I find a thread I like, or it’s time to head into the office.

In the long run, a routine keeps me sane. Rather than saying, “I have to write well,” I say, “I have to write today.” This way I can feel good about putting in the hours even when I’ve had an off morning, and for the rest of the day, my writer-brain can rest and refresh.

And of course, the more you write, the better you get, period

In addition to being my passion, writing is also an income stream for me, so I’ve got to treat it like a job. But I was working this schedule long before I got published, and it helped me get there.

Before writing, I have to read for at least half-an-hour to get my brain thinking in complete sentences. I’ve never been a “voracious” reader, and never subscribed to the read widely rule you sometimes hear writers espouse; I’m too picky and I read too slowly.

My tastes do vary, from Ian Fleming to Jeffery Eugenides, but there’s just too much great stuff out there to slog through five-hundred pages of something I’m not excited about, or to read books too different from what I want to write.

I’m sure there’s some phenomenal experimental memoirs in verse out there, but not for me, thanks.

For the larger-picture stuff, like story arcs and theme, I find television and movies are a great tool. It’s hard to trace a character’s development, or the rising action and tension, when reading a book over the course of a week, but absorbing a movie’s story in two hours gives me a more immediate sense of how the writer (screenwriter, in this case) structured their tale.

By far the biggest hurdle I’ve had to overcome as an author is something I think a lot of other young writers struggle with: how to tell a story. Pretty language? No problem. I will seduce you with my flowery prose! Social themes? Learned that in college, my motifs run deep, baby.

But story? That’s the trickiest.

How do you keep the reader turning the pages? How do you make your protagonist active instead of a passive observer? Learning to tell stories that move and excite, rather than try to craft “works of art” to be dissected in a classroom, is something I constantly wrestle with and a major reason I write for teens.

Teens don’t care if your metaphors are genius, or if your novel is a retelling of Crime and Punishment. They want story. They want characters they feel for, who alter and are altered by the world around them.

While working on my follow-up to Girl Parts I had a major case of English Major-itis. I was more interested in how I was telling my story— i.e. my style— than my what my characters were experiencing.

Eventually I had to go back and start over from word one. It’s been a ton of work, but man what an education! So far I’m happy with the results. I have no idea what my social themes or over-arching metaphors might be, but I know my story.

I wanted the world of Girl Parts to be recognizably our own, so the characters’ problems would feel immediate and familiar. Yet I was writing about some seriously sci-fi-sophisticated robots.

I decided Sakora, the company that makes Rose and the other Companions, would be light-years ahead of their competitors, but still in the beta-testing stages of their robot-program. That way, the Companions would not be a widespread phenomenon like cell phones or laptops.

Otherwise, I wanted the technology in Girl Parts to be entirely contemporary: David Sun has a cell phone and an iPod, he chats online and spends time in a Second Life-like virtual world.

Electronically, he’s uber-connected, but doesn’t feel an emotional attachment to anyone or anything. This, to me, isn’t sci-fi but a real problem teens face. 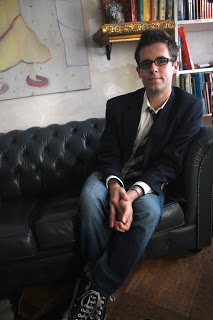 The real fun came in figuring out Rose’s physiology. We can assume a few things about the way most human characters think and feel even without knowing their back stories. I had to build Rose from the ground up, keeping in mind who built her and why.

I decided Sakora would give her a finite vocabulary; Rose would learn slang and jargon by listening to the humans around her (like CleverBot, which didn’t exist when I was writing Girl Parts).

Like any expensive piece of hardware, she’d need a satellite link, so her creators could download software updates, and so Rose could effectively “Google” any phrase or situation she wasn’t familiar with. To be a better human-analog, Rose would eat food, which she would “process” in private with a dainty burp. As a high-end consumer product, Rose would come equipped with her own wardrobe, “ablutions”, and instructional DVD.

I wanted Rose’s packaging and accessories to feel flashy, cheap, and banal to underscore the very real, very humane thoughts and feelings going on inside her.

Figuring how Rose would think was another fun task. I have a sketch above my desk labeled “Rose’s Brain,” which I drew while writing a later draft: it’s just an arrow bounded by a circle. I decided that the reductive egg-heads at Sakora would give Rose a very Freudian brain, with an Id (Rose’s innate desire for David) checked by a Super Ego (the rules, guidelines, and morays Sakora enforces on her from without). Today I still use this as a guideline for most of my characters: a strong desire, checked by outside forces. I only drew the picture to help me conceptualize Rose’s mind, but the image found its way into the language of the novel, too, and then, to my surprise, became a running motif. This is how it appears in the book:

Rose’s mind was an arrow. It pointed to David. The rest of reality, whatever didn’t fall along the length of the arrow, was insignificant. An Ethernet link connected Rose to a data bank at Sakura HQ in Japan. As her emerald eyes passed over the lawn, information queued for access. Grass. Flower pot. Stairs. Driveway. Tree. Each node was the center of its own web. Tree connecting to Green, Poplar, Seasons, Paper. This complex veil, pierced by Rose’s unwavering arrow, was a techno-semantic marvel.