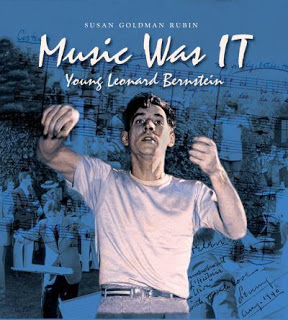 Susan Goldman Rubin is the author of Music Was IT: Young Leonard Bernstein (Charlesbridge, 2011), the Sydney Taylor Book Award winner in the Older Readers Category. From the promotional copy:

Beginning with Lenny’s childhood in Boston and ending with his triumphant conducting debut at Carnegie Hall with the New York Philharmonic when he was just twenty-five, Music Was IT draws readers into the energetic, passionate, challenging music-filled life of young Leonard Bernstein.

Why Leonard Bernstein? What personally connected you to your subject? What about him inspired the passion in you to devote the time, effort and enthusiasm necessary to bring this book to life?

I wanted to interest young readers in listening to Lenny’s music: his own compositions as well as music he conducted. For years, I have loved his pieces “Fancy Free,” and “Candide,” and even “The Age of Anxiety,” which I discovered on a recording in the music room of the library at Oberlin College where we could listen to LPs (vinyl).

And I was lucky enough to see the original cast in “West Side Story” when I was home in New York during a break from school.

When Bernstein’s series of televised concerts for young people was reissued as a set of DVDs in 2005, I thought the time was right to do this book as a way of introducing a new generation to his music.

Lenny himself inspired me to devote the five years it took to research and write Music Was IT. I loved reading and hearing anecdotes about him, listening to his recordings all over again, and discovering new photos.

My writer friends teased me that I was falling in love with Lenny. He was so charismatic! I almost didn’t want the book to be finished.

How did you approach your research? What tools did you use? What tasks? What were the biggest surprises you discovered? How about your biggest coup?

I started the book by going to the Leonard Bernstein Office in New York and asking for their approval and cooperation. To my surprise, they liked the idea. Maybe especially because I wanted to focus on Lenny’s early years when he struggled to make a place for himself in the world of music.

I was amazed to find that his father totally objected to his desire to become a professional musician. It was almost funny to learn that Lenny’s dad wanted him to go into the business he had established, the Samuel J. Bernstein Hair Company, or second best, to become a rabbi. Their ongoing conflict gave me a dramatic arc for the story.

The biggest coup was meeting two of Lenny’s adult children, Jamie and Alexander, who referred me to the Music Library at Harvard, where a terrific student project had been researched and exhibited about Lenny’s early years from Boston to Broadway.

There, I was amazed to find out that Judaism played an important part in Lenny’s musical life starting with services he attended as a boy with his parents. He later said that at synagogue he heard “the first real music.”

Thanks to the Leonard Bernstein Office and to Jamie and Alexander, I gained access to the Music Division at the Library of Congress and was able to see and handle family photos as well as Lenny’s handwritten letters, school notebooks, and music manuscripts.

What led you to frame the content the way you did? What other big-picture approaches did you consider, and why did you dismiss them? What did you most fret and/or most want to share with your audience?

I decided to frame the story from Lenny’s passionate discovery of music as a child to his dramatic debut at Carnegie Hall conducting the New York Philharmonic when he was twenty-five.

I wanted to show how he overcame obstacles, such as his dad’s constant objection to his “scary dedication” to music.

I felt that this story would be meaningful to kids who are trying to find out who they are, and encourage them to follow their own dreams.

In terms of the images and design, how did you participate in this process? Could you give us any examples of key decisions? What about the finished book do you love?

I chose all the visuals for the book. Some of the photos I saw in other books. But when I went to the Music Division at the Library of Congress with the permission of the Leonard Bernstein Office, I sifted through boxes and boxes of materials and discovered pictures and letters that had never been reproduced before in a published book that I thought would bring the story to life.

It was thrilling to hold the score for “I Hate Music,” a series of songs, hand written by Lenny.

Diane Earley allowed me to see her wonderful ideas for designing the chapter openings and her choice of typeface, and I was grateful to participate.

My editor, Emily Mitchell, urged me to add materials for the back matter such as a timeline and capsule biographies of the people who influenced Lenny’s musical life. It meant more work, but I’m so glad I agreed because I think this information is valuable and enriches the book.

One of my favorite parts is the closing line of the narrative. After Lenny’s stunning debut at Carnegie Hall, reporters asked his father why he had ever objected to Lenny’s desire to be a musician. And Sam Bernstein replied, “How could I know my son was going to grow up to be Leonard Bernstein?”

What advice do you have for fellow writers interested in crafting biographies for young readers?

Find a fresh way to present the life of someone you feel passionate about. Maybe an age group that isn’t familiar with the story. And most of all, write from the heart. Follow your dream.

See also An Interview with Susan Goldman Rubin: author of Music Was IT by Maria Kramer from The Hub is the literature blog for YALSA, the Young Adult Library Services Association. Peek: “Lenny loved all kinds of music. As a young pianist he played everything from blues to show tunes and boogie-woogie and drove his Harvard classmates crazy by playing loudly till all hours of the night.”

The Sydney Taylor Book Award honors new books for children and teens that exemplify the highest literary standards while authentically portraying the Jewish experience. The award memorializes Sydney Taylor, author of the classic All-of-a-Kind Family series. The winners will receive their awards at the Association of Jewish Libraries convention in Pasadena, California this June. See also The Association of Jewish Libraries blog.