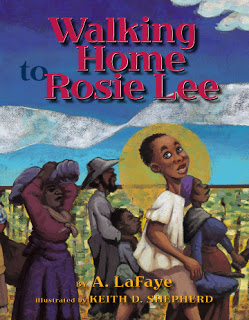 A. LaFaye is previously published in the novel, but Walking Home to Rosie Lee, illustrated by Keith D. Shepherd (Cinco Puntos, 2011) is her debut picture book. From the promotional copy:

Young Gabe’s is a story of heartache and jubilation. He’s a child slave freed after the Civil War, and he sets off to reunite himself with his mother who was sold before the war’s end.

“Come morning, the folks take to the road again, singing songs, telling stories and dream-talking of the lives they’re gonna live in freedom. And I follow, keeping my eyes open for my mama.

“Days pass into weeks, and one gray evening as Mr. Dark laid down his coat, I see a woman with a yellow scarf ‘round her neck as bright as a star. I run up to grab her hand, saying, Mama?”

Gabe’s odyssey in search for his mother has an epic American quality, and Keith Shepherd’s illustrations—influenced deeply by the narrative work of Thomas Hart Benton—fervently portray the struggle in Gabe’s heroic quest.

It seems almost fitting that Walking Home to Rosie Lee had a long journey to publication when you consider that it’s about a type of journey that was much longer and more difficult and silent within the pages of children’s literature.

As a historical fiction writer, I’m always looking for untold stories. Or better yet, stories that have been told, but not widely shared within the children’s literature community.

The story of family reunification among African Americans who had been enslaved has been told within that community from family to family, generation to generation, and the pages of history books by influential African American historians like John Hope Franklin.

Still, the story has not been retold often in children’s book, and it’s such a story of triumph and hope and perseverance that I wanted it to be shared and celebrated. And since it’s been a question I’ve had reverberating in my throat since I was a child, it’s no surprise that I wanted to know–why?

What kept this story out of children’s books for so long? Sadly, I found out that one of the reasons was that many editors did not see this as a unique chapter in the history in the story of African American history.

Most of the editors who rejected the manuscript said that they already had too many stories on the subject.

They lumped my manuscript into the category of “slavery” rather than seeing it as celebration of a unique aspect of the Reconstruction period.

In my research, I found that the period during the Civil War and shortly there after contained a wealth of stories of African American trials and triumph that should be celebrated in literature. For instance, why aren’t there more books about the struggle to establish African American schools, Freedman’s Bureaus that truly served the needs of the African American community (many were run corruptly by European Americans), Exodusters, and bi-cultural communities that strived to make American’s ideal of equality for all a reality? 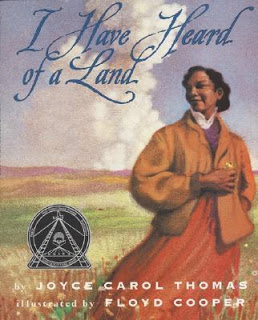 There are excellent examples of books about this era, including picture books (I Have Heard of a Land by Joyce Carol Thomas, illustrated by Floyd Cooper (Trophy, 2000) and Band of Angels by Deborah Hopkins, illustrated by Raul Colon (Atheneum, 1999)), novels (Forty Acres and Maybe a Mule by Harriette Fillem Robinet (Aladdin, 2000)) and nonfiction (Into the Land of Freedom by Meg Green (Lerner, 2004)).

At the same time, there are nowhere near the number of books that the complex tapestry of this era deserves.

I couldn’t find a single book about the reunification of African American families during reconstruction, so I wanted to write one to “get the ball rolling,” as it were.

I hope and pray that my book will inspire others to write about this trying and triumphant era of African American history.

I’ll leave the story of how Rosie Lee finally found its way into print for a later question in honor of the editor and publisher who finally saw the importance of bringing this story out into the world, Lee Byrd of Cinco Puntos Press.

As far as keeping the faith goes, I’m no expert at it, but I am quite experienced. I’ve always taken the road less traveled, mostly because I know I’ll learn new things going that way. 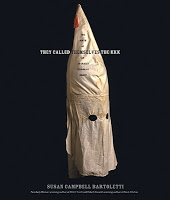 Taking that route often meant that I had great trouble finding sources when I did research, found it hard to convince an editor to see the value in my story, and had great difficulty in finding readers to follow me down that path. The readers that could find my work generally loved it, but I’ve struggle for over a decade to find a wide readership.

I often explain to folks that I’m more of a “writer’s writer” like the character actors we recognize when we see them and admire for their work, but we really don’t follow their career.

I’m hoping that this book will find a wider reading audience and hopefully bring more readers to my other books.

Speaking of which, one of those books Stella Stands Alone (Aladdin, 2010) is the whole reason Rosie Lee came to be. Well, that book and Susan Campell Bartoletti, author of They Called Themselves The KKK (Houghton Mifflin, 2010). More on that in my answer to the next question.

Susan Campell Bartoletti, a dear friend and excellent teacher, once said that if you’re going to do all of the research for a historically themed book, you should write more than one book based on that research. That makes sense. You’ve done all the research. Why not look at the material from more than one perspective?

After all, history is all about perspective. Looking at the same event from multiple perspectives allows us to see how different the same historical event/period could have been for the many different people who experienced it. I’d done a lot of research for each of my historical novels, but I’d never been able to follow Susan’s advice until I wrote Stella Stands Alone (Simon & Schuster, 2008). 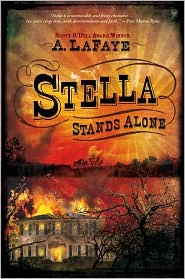 Set in Mississippi just after the Civil War, the novel tells the story of Stella Reid, who inherits the family plantation when her father is murdered for trying to divide the place up amongst the people his father (Stella’s grandfather) had enslaved.

I wrote the novel because I wanted to explore what would have happened if individual planters had made good on Sherman’s promise of “40 acres and a Mule” before President Andrew Johnson repealed it.

In the process of writing the novel, I uncovered two areas of history that I felt needed to be shared—one to be condemned, the other to be celebrated—forced apprenticeships and family reunification.

At the end of the Civil War, plantation owners pulled out all the stops to force the African Americans they had enslaved to remain indebted to them—each institution worse than the last, destroying marriage records kept by Union officers, refusing to issue marriage licenses, demolishing schools, share cropping, fear tactics like the KKK, and the list continues.

One thing they did that I had never even heard about before was forced apprenticeships where they had a child (who could have two living parents) declared a ward of the state because the parents couldn’t produce a birth certificate or a marriage license, then forced the child to work for free until his/her 21st birthday. Some parents were coerced into agreeing to these apprenticeships. Most fought for years to regain custody of their own children.

I incorporated this horrible practice into the story by having Stella’s best friend forced into an apprenticeship while her mother, Rosie, was away trying to find the three sons she was torn away from when her owner lost her in a poker game and sent her upriver to work on another plantation.

To write Gabriel’s story, I drew from the research I had done for Stella Stands Alone through historical records, museums, history books, and articles. So much of the story of these families didn’t make it into print, so most of the details I had to piece together from a myriad of stories within partial tales left behind in want ads (looking for lost family relatives in African American newspapers), vague descriptions of Freedman’s Bureau, petitions for marriage licenses, and personal stories like that of William Stillwell, an abolitionist who fought for decades to reunite his own family.

It’s my sincere hope that my story can hold a candle to the courage, hope, and determination of all the people who struggled through so much to reunite their families. 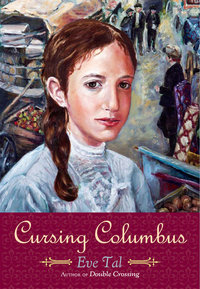 The editor for Walking Home to Rosie Lee was Lee Byrd of Cinco Puntos Press. I first came to know of Ms. Byrd and her publishing company through a writer friend of mine, Eve Tal, author of Cursing Columbus (Cinco Puntos Press, 2009).

Eve had asked me for advice on her debut novel Double Crossing (Cinco Puntos Press, 2007), and when the book came out, Lee Byrd asked me to write a blurb for the back cover. I admired the Byrds’ commitment to telling unique stories, untold chapters of history, and keeping the independent spirit of publishing alive.

When I first sent the manuscript to Lee, she wrote back to say how much the story had touched her, but that she was going to pass on the story because Cinco Puntos hadn’t published any books focusing on African American history and wasn’t sure they’d have the grounding to promote the book.

Several months later, I saw Lee at a conference. We talked, and she told me that she hadn’t returned the manuscript to me because she found that she often went back to reread the story because it had touched her. I encouraged her to listen to the voice that told her it was a manuscript that was not only worth reading, but also re-reading—the hallmark of a great picture book, in my mind.

Not to mention being a distinction that I found humbling. It’s always an honor when something you’ve written resonates enough with readers to make them want to return to the story you’ve shared with them. 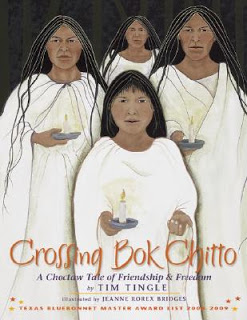 Lee reminded me that Cinco Puntos hadn’t published a book in this area before, and I suggested that there’s always a first time and that they’d proven with other books like Crossing Bok Chitto (written by Tim Tingle, illustrated by Jean Rorex Bridges — Cinco Puntos 2006) that they could branch out into new subject areas and do very well.

She agreed that I might have something there and promised to show the book to her husband and son (Cinco Puntos is a family run company out of El Paso, Texas) and see where that might lead.

It led to them signing on the book and finding an illustrator like Keith Shepard who was ready to illustrate his first book.

So this book is a debut on three counts—my first picture book, Keith’s first book ever, and Cinco Puntos first title focusing on African American history.

It’s my hope that it’s the first in a long line of good books for all of us!

2 thoughts on “New Voice: A. LaFaye on Walking Home to Rosie Lee”