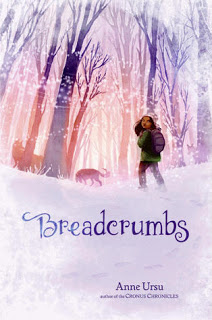 In Hans Christian Andersen’s “The Snow Queen,” Gerda and Kai are best friends until the day a shard of magic mirror falls into Kai’s eye and he’s cruel to Gerda.

In Breadcrumbs (HarperCollins, 2011), the same thing happens to Minneapolis fifth-graders Hazel and Jack. They’re best friends in the world, until one day Jack just changes. And then he disappears. Hazel learns he’s been taken into the woods by a witch-like woman in white. Her plan is simple: go into the woods, save her friend, and they can all live happily ever after.

But the fairytale woods in Breadcrumbs are not a happily-ever-after kind of place. Really, fairytale woods rarely are. The Cinderella-type stories that end with palace weddings and promises of eternal bliss are the succulent gingerbread houses that lure us into the fey world of mischief, vendettas, curses, and cruelty, where children are neglected, orphaned, abandoned—and that’s just at the beginning.

Child readers devour the tales, knowing full well what really lurks inside gingerbread houses. I think the idea that fairy tales are happy comes from adults, from a wish they have for kids and for the stories they love.

It’s easy to be so dazzled by fairy-godmother glass slippers that you forget a pair of shoes can just as easily make a girl dance herself to death.

We try so hard to protect our kids from the world as long as we can—hiding the ugly bits, promising certainty, security, a happily ever after. As adults writing for kids we protect our child characters, too. My first draft didn’t ask much of my protagonist Hazel, because I wanted the misfit girl in the beginning of the book to learn to feel okay about herself. And while Hazel struggled with the shifting landscapes of the real world, when she went into the enchanted woods she was fine. But I started this book wanting to write about growing up, and I wasn’t doing anything to help Hazel do so.

I recently worked with a student who was writing a book about a boy with Asperger’s. The character was so deeply felt that as a reader I dreaded the struggle he would go through. But in the first draft, he didn’t struggle. The writer couldn’t put this boy through the sort of hardship protagonists are supposed to experience. She kept throwing in people and situations that protected him, eased him–the fairy godmothers of narrative—because part of her simply could not bear to have him suffer.

We talked about this, and she came back next time with a manuscript full of tests and trials for the boy, and a quote for me from a memoir by Tim Page about growing up with undiagnosed Asperger’s:

“For some of us, stories where the characters don’t live happily ever after, where the hero is too late to save the day, where nothing is redeemed are curiously restorative, for they present a vision of the world that serves to reinforce what we see with our own eyes, and the truth is not so terrible that it can’t be told.”

That’s it. The truth is not so terrible that it can’t be told. Sometimes the world is completely outside of the child’s control. Growing up is a process of change, all the time, and the rules change too. Friends fall away, people get sick, families break apart, other kids are cruel. Nothing is assured, least of all happy endings. But that doesn’t mean the world isn’t so terrible you can’t live in it. That you can’t thrive in it.

The trick is simply figuring out how. And this is what stories help kids do.

The Cinderella ending is about safety and sameness. It’s a reassurance that everything will be okay for the heroine as soon as the fairy godmother appears and waves her wand. And the heroine doesn’t have to do anything but wait around. It is tidy, and easy, and it is small comfort.

Growth is something else. It is about a journey, it’s about maturity and strength earned through hardship. It might not mean you get what you want at the end, it might mean you carry scars, it might mean you’ve lost things along the way. But it also means you’re more able to live in the world as it is, to slay whatever dragons might come across your path in the future.

In the woods Hazel encounters people who have been lured in by the gingerbread-house exterior of fairytales. They believe in a happily-ever-after universe and so cannot live in the real one—and in their attempt to escape they’ve become trapped.

It’s not Hazel’s lot to be entrapped by stories—but rather to absorb them, to integrate them into her own understanding of the world even as they threaten and try to break her. The woods never affirm Hazel—they rock her and change her—but by going through them she’ll be better able to find her footing in the real world. And the magic in it, too.

10 thoughts on “Guest Post: Anne Ursu on Happily Ever After (or Not)”