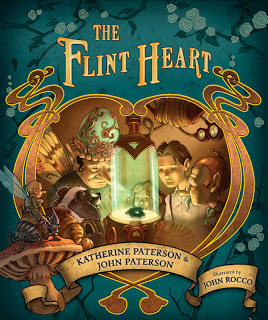 Enter to win The Flint Heart by Katherine and John Paterson, illustrated by John Rocco (Candlewick, 2011)! From the promotional copy:

An ambitious Stone Age man demands a talisman that will harden his heart, allowing him to take control of his tribe. Against his better judgment, the tribe’s magic man creates the Flint Heart, but the cruelty of it causes the destruction of the tribe.

Thousands of years later, the talisman reemerges to corrupt a kindly farmer, an innocent fairy creature, and a familial badger.

Can Charles and his sister Unity, who have consulted with fairies such as the mysterious Zagabog, wisest creature in the universe, find a way to rescue humans, fairies, and animals alike from the dark influence of the Flint Heart?

This humorous, hearty, utterly delightful fairy tale is the sort for an entire family to savor together or an adventurous youngster to devour.

Read a sample chapter (PDF) and A Conversation with the Creators of The Flint Heart (PDF), both from Candlewick. Listen to an audio of Katherine Paterson discussing the book.

To enter, comment on this post and include an email address (formatted like: cynthia at cynthialeitichsmith dot com) or a link to an email address. Or email Cynthia directly with “The Flint Heart” in the subject line. Publisher-sponsored. Eligibility: U.S. Deadline: midnight CST Nov. 14.

The Flint Heart Book Trailer from Candlewick Press on Vimeo.

A feature film adaptation of The Flint Heart was optioned ahead of publication and is already in development with Bedrock Studios and Arcady Bay Entertainment. 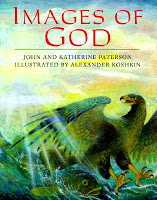 Katherine Paterson is the current National Ambassador for Young People’s Literature. Her international fame rests not only on her widely acclaimed novels but also on her efforts to promote literacy in the United States and abroad. She is a two-time winner of the Newbery Medal and the National Book Award, and she has received many other accolades for her works, including the Hans Christian Andersen Medal, the Astrid Lindgren Memorial Award, and the Governor’s Award for Excellence in the Arts, given by her home state of Vermont. Katherine Paterson was also named a Living Legend by the Library of Congress in 2000. She lives in Barre, Vermont, with her husband, John Paterson.

John Rocco collaborated with Whoopie Goldberg on the picture book Alice (Random House, 1992) and was Creative Director at Walt Disney Imagineering and served as pre-production art director at Dreamworks Moonpowder, and his illustrations are also featured on the jackets of Rick Riordan’s best-selling YA series Percy Jackson and the Olympians. John Rocco lives in Brooklyn, New York.

13 thoughts on “Giveaway: The Flint Heart by Katherine and John Paterson, illustrated by John Rocco”