Thanks to Wizard World for offering me a complimentary table in artist’s alley at Austin Comic Con!
It was my first time at the show, and after consulting with fellow kidlit graphic novelists Barry Lyga, Jenni Holm and Matthew Holm, I decided to use the opportunity as a reader meet-and-greet.
Greg Leitich Smith and I did giveaways of signed bookmarks and postcards, “blood” candy, and signed copies of Tantalize and Eternal as well as my own debut graphic novel, Tantalize: Kieren’s Story.
We didn’t advertise the giveaways–so as not to be mobbed by people simply grabbing free stuff–but rather let readers come and find us. We had some terrific conversations, dished on the series to established fans and hopefully won over new readers, too!
To everyone who teared up, yelped, started bouncing, ran to drag your best friends over, or couldn’t leave without a photo and hug, it’s an enormous honor to write for you!
Thanks to all the YA readers, artists, librarians, and booksellers who stopped by to chat! 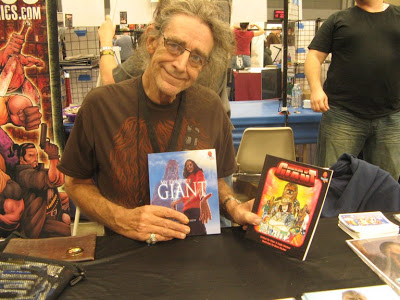 Upon arriving, I was charmed to find myself positioned across from Peter Mayhew (AKA Chewbacca) of “Star Wars” fame.
Lending him my packing tape was the closest I’ll ever come to an I-Saved-the-Wookie moment. Check out Peter’s books, My Favorite Giant and Growing Up Giant. Note: he did a reading on Sunday, which was designated as “kid’s day” at the convention.
From there, the event was a blur of costumed fun. Here are a few highlights!