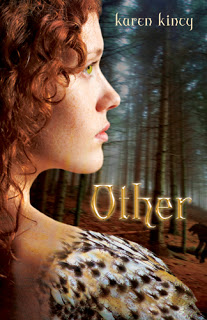 Karen Kincy is the author of Other (2010) and Bloodborn (2011), both from Flux. From the promotional copy of Other:

Seventeen-year-old Gwen hides a dangerous secret: she’s Other. Half-pooka, to be exact, thanks to the father she never met.

Most Americans don’t exactly roll out the welcome mat for Others, especially not the small-town folks of Klikamuks, Washington.

As if this isn’t bad enough, Gwen’s on the brink of revealing her true identity to her long-time boyfriend, Zack, but she’s scared he’ll lump her with the likes of bloodthirsty vampires and feral werewolves.

When a pack of werewolves chooses the national forest behind Gwen’s home as their new territory, the tensions in Klikamuks escalate–into murder. It soon becomes clear a serial killer is methodically slaying Others.

The police turn a blind eye, leaving Gwen to find the killer before the killer finds her. As she hunts for clues, she uncovers more Others living nearby than she ever expected. Like Tavian, a sexy Japanese fox-spirit who rivals Zack and challenges her to embrace her Otherness.

Gwen must struggle with her own conflicted identity, learn who she can trust, and–most importantly–stay alive.

Looking back, were you surprised to debut of late, or did that seem inevitable? How long was your journey, what were the significant events, and how did you keep the faith?

Other was the first novel I ever wrote, and when I sent it out into the world, five agents duked it out in a battle to represent me, and then ten editors fought over the book in a fierce auction—I wish!

In reality, Other was my fourth novel, and I acquired a mountain of rejections before it ever made it to acquisitions at my publisher, Flux.

You want the true story? It all started when I was thirteen. I was writing a sci-fi about a talking chameleon and a fantasy about a dragon with the unpronounceable name of Jamvthund. (I had a thing for imaginary reptiles.) Needless to say, these novels remain unfinished and unseen. Call it part of the learning process. I was young and not a very good writer yet.

But I was determined to have a book published in my teens, possibly because I was an incorrigible show-off, so I kept writing and learning and getting better until—when I was eighteen—I finished a YA novel about werewolves, sent it out, and racked up ninety rejections.

Undeterred, still daydreaming about fame and fortune at a tender age, I wrote a novel about winged people. My second novel racked up another ninety or so rejections.

I fiddled with a third novel, never finished it, and was stumped for awhile.

Finally, I dug around in my imagination a bit more and hit pay dirt. My fourth novel, originally titled Otherworld: Portal Danger, was a parody of fantasies where portals dump ordinary teens into a magical world. Though my teens were extraordinary—a half-pooka shapeshifter, a Japanese fox-spirit, a werewolf guy, etc. Sound familiar, readers of Other?

Yes, I ditched the parody and kept the characters. The half-pooka shapeshifter, Gwen, became the star of a murder mystery in an alternate America nearly identical to our own—except for the fact that paranormal people exist and everybody knows it.

So here comes the mountain of rejections part. Other collected its ninety rejections before my editor, Brian Farrey at Flux, plucked it out of the slush pile, and I signed with my agent, Sara Crowe.

Everything happened so fast then—after years and years, suddenly I had a publication date, and a debut novel that needed revising. I don’t think it was inevitable, because I sold Other and a second novel, Bloodborn, while I was a sophomore at college—if I could have predicted it, I would have timed it a little better. My schedule was insane that year!

How did I keep the faith? Sheer stubborn persistence and just a touch of obsession.

Remember, I wanted to be a teen author. I missed that deadline by a few years, and now I realize that the gimmick of “look how young I am!” isn’t as important as, say, readers actually loving your writing.

Nowadays, knowing that there are fans of Other keeps me going. That is, at heart, why I wanted to be published. Otherwise, I could have crouched like Gollum in a cave, hissing at people who came too close to my manuscripts. And we wouldn’t want that.

I have always thought that the best speculative fiction—be it horror, high fantasy, or paranormal—acts as metaphor, exploring the crossroads of the real and the imaginary.

These aren’t just books about vampires, fairies, and werewolves. These are books that take our secret, often darker, thoughts and desires and explore them in a way strange yet familiar. The conflicts are recognizable, but also foreign enough to spark insight.

In Other, I wanted to tie together the magical and the mundane and then tighten all the knots. I had read many paranormal novels where werewolves and vampires conveniently hide from mainstream eyes. I wanted them to be an unavoidable part of everyday life.

From this idea came Others, paranormal people who live among us—and everybody knows it. Others have altered the culture we know in ways both large and small, everything from life-and-death laws to tiny details like tuna at the grocery store advertised as being caught in mermaid-safe nets. Others have become part of the ordinary, even if they are, by definition, extraordinary.

Clearly, Others are those who are not “us”—but haven’t we all felt this way at one time or another?

There’s always something about you or I that doesn’t fit “normal,” something we might be conflicted about sharing or hiding. Gwen, the half-pooka protagonist of Other, conceals her shapeshifting abilities from everyone outside her family, especially her boyfriend, since he’s a human from a conservative background. She thinks of herself as “under the bed,” a monster who hasn’t come out yet. But there are those who are openly Other, like those who march in the midnight Vampire Pride Parade in Seattle, or the centaur browsing produce at the grocery store—but of course, the centaur doesn’t have the luxury of hiding his identity. 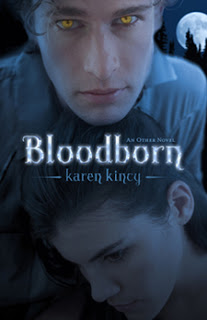 Bloodborn, the second novel in the series, focuses on a particularly reviled group of Others: the werewolves. It’s not all about exciting shapeshifting, battles with rival packs, and occasional encounters with humans who tread on their territory.

In this world, werewolves are a minority, and they have to play by human rules. Or, if they break these rules, live as outlaws on the outskirts. Since werewolves often face discrimination and a lack of jobs, many have resorted to crime as a means to feed themselves and fight back against hunters. They run, hunt, and sleep in the national forests of America, moving between safe havens in caravans of cars and campers.

The protagonist of Bloodborn, Brock, first appears as an antagonist in Other. He bands together with those who hate and fear Others, hunting down werewolves in the forest. After being bitten by a werewolf, he becomes the very thing he hated. He fights the urge to transform every full moon, while his older brother—bitten by the same wolf—fights for his life in the hospital. Brock takes a drug to keep himself from changing into a wolf, but he’s infected, tainted, and he knows exactly why his family fears and shuns him. Obsessed with the desire for revenge, Brock vows to kill the werewolf who bit him and his brother.

But the true conflict of Bloodborn isn’t Brock’s hunt for the werewolf who bit him. For a newly bitten werewolf—a bloodborn—the struggle to embrace your new identity can be fatal. If the brutal first transformations don’t kill you, another werewolf or an overzealous sheriff might. The pain of resisting the change to wolf physically expresses the pain of leaving your old self behind. Not unlike that first time you move out on your own, and you alone have to face the bittersweet independence and make something of yourself.

It’s no coincidence that I wrote Bloodborn my second summer at college. I’m always fascinated by what happens when someone must change—no wonder I write about shapeshifters so often.

Enter to win a copy of Other (2010) and/or Bloodborn (2011), both from Flux. To enter, comment on this post and include an email address (formatted like: cynthia at cynthialeitichsmith dot com) or a link to an email address. Or you can email me directly with “Other,” “Bloodborn” or “Other/Bloodborn” in the subject line. Publisher-sponsored. Eligibility: North America (U.S./Canada) Deadline: Oct. 14.

14 thoughts on “New Voice: Karen Kincy on Other and Bloodborn — Plus Giveaways”