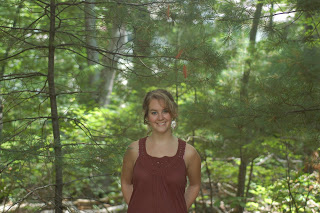 Erin E. Moulton is the first-time author of Flutter: The Story of Four Sisters and One Incredible Journey (Philomel, 2011). From the promotional copy:

Big things are about the happen at Maple’s house. Mama’s going to have a baby, which means now there will be four Rittle sisters instead of just three.

But when baby Lily is born too early and can’t come home from the hospital, Maple knows it’s up to her to save her sister.

So she and Dawn, armed with a map and some leftover dinner, head off down a river and up a mountain to find the Wise Woman who can grant miracles. Now it’s not only Lily’s survival that they have to worry about, but also their own.

The dangers that Maple and Dawn encounter on their journey makes them realize a thing or two about miracles-and about each other.

Well, finding my protagonist, Maple, was a journey in and of itself. Flutter is a Vermont College of Fine Arts baby. I remember starting it in my second semester. Ellen Howard [pictured] was my advisor.

Prior to that, I had worked through a novel my first semester, which shall remain nameless and in a drawer for all time. I sent the nameless novel to Ellen, hoping beyond hope that I could continue working on it for the semester. I was clearly delusional.

Ellen read the story and nicely mentioned that she was “exhausted” from reading the draft. Within the same packet, I had included a biography. She noted in her letter back to me that she liked the biography, that it was a surprise. She thought it had unique voice and seemed more real.

She told me that I was not going to continue the draft of my previous/nameless novel for the time being.

It seems like my main character, Maple, jogged loose from my heart and fell straight into my head. When I sat up, I walked over to the computer and began typing. Maple was simple, she was heartfelt and she trying to prove herself. She was a very easy protagonist for me to listen to because she was similar to me as a kid. Maybe similar to me, still.

The secondary characters? I took Ellen’s sage advice and considered, for a while, what I knew about life. At the time of writing that first draft, I was 23 years old. I felt as though I didn’t know much at all about life. But I figured I didn’t need many things. I just needed to know about something.

After some mulling, I managed to recognize that I knew about home, about family and about love. So, in my head, I shot myself back to the mountain I grew up on, and I thought good and hard about the different traits each of my sisters had. And I mined their characters for my writing.

Maple is primarily with Dawn throughout the book. Dawn is a “scholar” in Maple’s eyes. The older sister who knows everything. The real-life Dawn, Amber, in fact, has a PhD from Harvard University and is very much a scholar today. Turns out, she knows mostly everything.

There’s also the younger sister, Beetle, whose thinking cap is a war helmet. She loves to lift things and carry them around. Coincidentally, or perhaps not so much, my younger sister, Casey, is a coach and an athlete.

Lastly, there’s little Lily, who everyone is out to save. And we don’t see Lily a whole lot because she’s just barely been born and the kids are all concerned about her premature birth and whether she will make it or not.

My littlest sister, Moie, was born, not prematurely, but with a few little complications along the way, which made me nervous as a kid. I didn’t know the words “Caesarean” and “breech,” and it sounded pretty scary. So I mined and amplified those feelings and thoughts for Flutter.

Sisterhood is prevalent in Flutter. Writing them into the story was simple since I have known them my entire life.

And as far as an antagonist? The antagonist took me much longer to tie down. First, there was nature. That one was easy. Since the kids journey out into the mountains a plethora of scenarios could have taken place. It was deciding which scenarios would happen and where those would send the kids next. Along the way, they meet some pretty gruesome poachers, an annoying park ranger and his kid, and the natural elements.

Conflict and these antagonists came last and developed over several drafts. 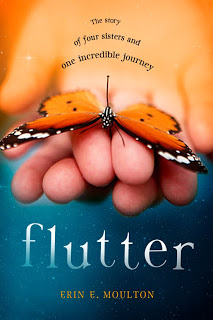 Voice is a tricky thing. On one hand, there is voice that flows up as part of the creative process. And that level of voice, for me, is more along those “magic” lines.

I know it’s working only by the feeling in my spine. It’s that feeling you get when you hear your favorite song. Shoulders curl, eyes close, fingertips tingle, and you’re transported.

You’re in a magic little bubble where you can only hear that voice. It has the ability to make my limbs heavy, my heart pound and my stomach flip.

And when I feel that, somehow, my writing has different rhythms and beats than when I am forcing it.

So what is that? And how do we identify and harness it?

It’s almost one of those things I don’t want to examine too closely lest it escape. But that doesn’t make me any less curious about it. Many writers have a signature voice. And you can tell immediately when you are reading their work.

Sometimes I wonder if it is all derived from the dusty archives of the mind. Do the rhythm and beats of certain lullabies, nursery rhymes, poems, storybooks, and novels from life-so-far embed themselves in your subconscious? Only to tangle there until they are strung together into unique threads of voice? Or is it something beyond the veil…woooo, wooo (those are supposed to be ghost sounds.) I could really mull over it all day and never come to a conclusion except that I know it is working when I feel it.

So, how to harness that? Based on what I have previously said in this interview, sadness and headstands while singing a lullaby might get you there, or perhaps getting one of those little dental instruments to dig rhythms out of your brain crinkles also might get you there.

Okay, that last one is definitely not recommended. But in all seriousness, usually, at least for me, a character pops up saying just a few interesting words. And those words stick and won’t settle until I start writing.

For example, Maple begins by saying, “It all starts at home. On the mountain. Three miles up a rutted dirt road, out past Mr. Benny’s apple orchard, and over the hill from Nanny Ann’s farmstand.”

And I say that line over and over again, until a few more lines pop up and those lines match that first line. And, I suppose, if you weren’t “feeling it” you could go ahead and examine those lines to see what makes them tick. I would opt to put on some music, drink some tea and mull over those lines until the rhythm is internalized… and give it time.

Now, that is primarily voice that comes alive during the creative process.

For me, there is also a different level of voice that can flourish during revision. It’s during revision that I can see where the voice is clear and where it lags. And it has much to do with understanding and knowing the heart of the character.

After I had written, and was in the process of revising Flutter, I knew that Maple used lots of nature metaphors. She used short sentences when she was upset. She had a slight mountain accent, and she never had all the answers, but she had a genuine soul that was filled with compassion. I didn’t know those things setting out, but by the time I had let the manuscript marinate for a while, I was able to add and tweak to really fortify her voice throughout the story.

In short (she says after writing several paragraphs), for me, it’s a marriage of the creative and the logical, the left brain balancing the right. Let feelings and the creativity and the wild string of words flow forth, but look at it, scrutinize it, pull it back and expand where necessary.