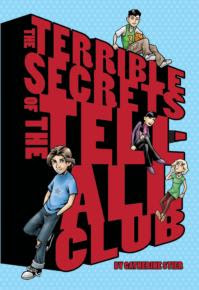 Catherine Stier is the first-time author of The Terrible Secrets of the Tell-All Club (Albert Whitman, 2009). From the promotional copy:

No one at school had ever thought up a club like this. All you had to do to be in it was answer some questions and share them with the rest of the club.

Questions like: What is your favorite salad dressing? Who is your BFF? What was your most embarrassing moment?

There were plenty of reasons to be in the Tell-All Club. Kiley, T.J., Josh, and Anne each had a different motivation: One of them wanted to fit in, one wanted revenge, one had something to hide, and one of them was dying to find out another’s secret. 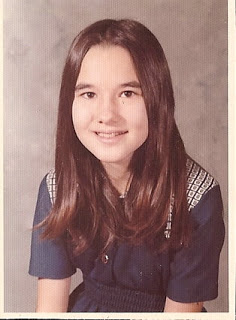 As a young reader in the 1970s [pictured], I was intrigued by fantasy, historical fiction, the post-apocalyptic novel The Girl Who Owned a City by O.T. Nelson (1975) and the gritty realism of The Outsiders (1967) and other novels by S.E. Hinton.

But I also found myself turning to older books still available in the library, the lighter teen stories my mom read in the 1950s such as Going on Sixteen by Betty Cavanna (1946) and Double Date by Rosamond du Jardin (1951).

While these books did feature some out-of-date fashion references (I was probably not going to slip on a taffeta housecoat anytime soon), I could relate to issues of sibling rivalry, forming and maintaining friendships, contemplating the possibility of college and a career and experiencing the excitement of a first significant romantic relationship.

In creating my first novel, The Terrible Secrets of the Tell-All Club, I remembered the importance of books that touched on the things I dealt with or anticipated in the future of my own life. Yet I hoped to address the concerns of younger readers, and I didn’t want to create a novel aimed specifically for girls. As the mother of both a son and a daughter, I felt it important to explore issues boys as well as girls face with friendships, families and trying to make sense of the world.

In my novel, four fifth-grade characters — two girls and two boys — begin to leave behind that little kid part of their lives. They start to structure their own identities, apart from their families. They sort out what is important to them, what they themselves believe in and stand for in their own developing value systems. They also, maybe for the first time, notice and form judgments on the flaws of family and friends. And one character, very tentatively, considers what it might be like to have a first crush, as modeled by the budding romance of an older sibling.

The book shares the viewpoints of four characters, Josh, Anne, Kiley and T.J., who try to figure out each other based on the behaviors they observe. But while the reader gets a peek at what motivates each character, the characters themselves sometimes find each other’s behavior inexplicable. That, of course, truly happens in real life, and I hope it is part of the fun of the book.

One last note: while writing the novel, I worked as a part-time substitute teacher and classroom aide. I saw how students enjoyed when teachers read aloud, yet how challenging it could be for a teacher to find a book that appealed to an entire classroom of students.

My secret daydream — and this was before the book had been accepted for publication — was that someday, The Terrible Secrets of the Tell-All Club might be read aloud by a teacher to the class. Following the book’s release, I began to hear that this is exactly what happened. And, most gratifying, I was told boys sometimes ranked as the book’s biggest fans. 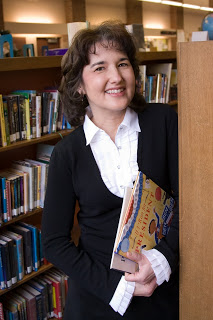 Let me start by explaining the differences in the way I promoted my first book — a picture book released in 1999 — and the ideas I have for this book, a debut novel for ‘tweens, introduced some ten years later.

My 1999 title was the presidential-themed, nonfiction picture book If I Were President (Albert Whitman) that teachers still use with their classroom lesson plans.

Back then, of course, I took a very different approach to promotion for several reason. The technology wasn’t where it is today. Also, this was a picture book with a subject matter that worked well for some very specific markets.

One of my first moves was to call the White House Historical Association and ask if they might consider If I Were President as merchandise for their White House gift shop. The book had to pass a review committee, but in fact was chosen for their children’s book section. To my delight, they subsequently ordered hundreds of copies to fill their shelves.

The same thing happened with the Mount Rushmore History Association. Then the Smithsonian National Museum of American History picked up the title on their own.

Throughout the years, I’ve had the cheering experience of receiving phone calls from vacationing family and friends, who excitedly tell me they’ve found my book in local attractions’ gift shops during their travels. And one year, I was even invited to conduct a book signing at Mount Rushmore during their Independence Day celebration, when an estimated 30,000 visited the park in one day. 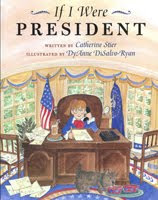 Now, years later, I have a website and a blog …and a ’tween novel. And I realize this kind of book requires a very different approach to publicize. My SCBWI chapter has been most helpful, hosting events that explore new media and technology for authors and illustrators. And I have learned from the example of other novelists that one way to promote a book is to have fun with some element of the title or plot.

In my debut novel, four fifth-graders each have to answer a tell-all survey of 50 questions to be part of the latest club. While I did create all 50 questions, only some were revealed in the book, both in story and in the chapter headings. The questions range from “What is in your locker right now?” to “What one thing about you would surprise people if they found out about it?”

I can see that these 50 questions may offer some unique opportunities for promotion. For example, I could tweet one question a week and invite responses from the Twitterverse. Or, perhaps, post one question a week on a blog and invite a guest children’s author to answer that question as he or she would have in fifth-grade, and as they would now. Hmmm…

My advice for other debut authors?

For picture books or novels, consider how your book might fit in the gift shops of museums, national parks, monuments, zoos, botanical gardens or other tourist attractions.

Also think about what unique elements of your book — such as the 50 questions — you might play up and celebrate on your website, blog, in press releases and at book signing events. Contact your local newspapers and alumni magazine.

Finally, author school visits offer a wonderful way to share your books. Research how your book might tie in with the curriculum, or relate to issues of concern to schools such as bullying. Emphasize those subjects, concepts or issues in your school programs as well as your promotional materials.

4 thoughts on “New Voice: Catherine Stier on The Terrible Secrets of the Tell-All Club”