Lark Pien is the debut author-illustrator of Mr. Elephanter (Candlewick, 2010)(blog). From the promotional copy:

Early every morning, Mr. Elephanter arrives at the Elephantery to care for his diminutive charges, who greet him with toots and trumpets.

There are hugs and hellos all around! They all eat pancakes, paddle and splash in the neighborhood pool, and parade through the bustling city.

After naps, Mr. Elephanter pretends he’s a tunnel, tower, and bridge, while the elephanties play all around him.

Come visit the Elephantery, where Mr. Elephanter looks after the peppy elephanties! A charming, quirky picture book debut by an acclaimed cartoonist.

My mom had her favorites and I distinctly remember her reading to me Mother Goose Nursery Rhymes, “The Tyger” by William Blake (1794), and The Happy Prince by Hans Christian Andersen. I continued to read these stories long after it was considered acceptable by my peers. I think I was attracted to the strangeness of the language and also the sadness that sometimes appeared in the stories.

As an young reader, I recognized authors: Leo Leonni, Tomie de Paola, Arnold Lobel, William Steig, Bill Peet, Mercer Mayer, and I would seek out titles by them.

I loved the shapes and colors in Leonni’s and de Paola’s books. Lobel’s stories were completely engrossing to me, and I always sensed there was a lot of drama even though there were very few words in the text. Mayer’s characters were messy but had an addicting charm.

I enjoyed reading and would borrow the maximum number of books allowed each time we visited the library.

I also vividly remember my first grade teacher, Mrs. Beverly Rodericks – a warm lady with an ample bosom and curly blonde hair, rouged checks and a soft voice – as she read aloud to the class Rain Makes Applesauce by Julian Scheer, illustrated by Marvin Bileck (Holiday House 1964). I loved listening to the words. They didn’t make much sense, but at the age of five, this was my absolute favorite book.

(Many years later, after having long forgotten the title, I was reunited with this book by typing into a search engine the line I could recall: “oh, you’re just talking silly talk”.)

It is difficult for me to say exactly how these early years influence my work now, but it is apparent that I am fond of my early years and that I find value in the memories of being young and of being read to.

As an author-illustrator, you come to children’s books with a double barrel of talent. Could you describe your apprenticeship in each area, and how well (or not) your inner writer and artist play together? What advice do you have for other interested in succeeding on this front?

I had little formal training in the arts, but received special attention for my writing in high school. My English teachers encouraged me to take independent study courses and to exercise my creative mind. I wrote scripts, interior monologues, free form paragraphs with no periods. We would meet one-on-one, once a week to discuss the writings. I had a lot of freedom then.

My writing petered out in college, but my pictorial and symbolic vocabulary grew. I was studying architecture at the time, and a lot of visualization was required.

I had a vivisecting obsession, which compelled me to draw associative maps – of buildings, daily schedules, to-do lists, music mixes, dreams. Later on, this associative mapping would become an important tool for cartooning (making comics).

The idea of drawing comics was suggested to me later when I was already well into my architectural career, but I took it up because it was a nice place for my drawing and writing to meet.

I am predominantly a visual thinker, and therefore set out in making stories by drawing what initially comes to mind. The text follows closely (usually I will draw and write at the same time) and is based on what I hear, feel, or see in the images.

From these first glimpses into a story, I will construct thumbnails, and eventually hone it into a comic. Editing comes later, at which point I become extremely critical of my word choice and make a lot of changes. Finding the right words can give me a sense of closure.

Adapting the comic “Brave Mr. Elephanter” into a traditional children’s book was challenging since the process was nearly opposite of that described above. I was asked to lead with the text, define the story through the text, and then to make one drawing per page, illustrations that would support the text. The writer in me got a real workout, while my artist side felt constricted.

It was uncomfortable, but I had to trust words and pictures would reconvene in a way that was natural and real. In the end, I was willing to be flexible with my creative habits, as long as the intent of Mr. Elephanter remained true.

Knowing my own process and getting to know the processes of others has been helpful. Understanding potentials, limitations and capacities also brought the Mr. Elephanter children’s book to fruition. These aspects do not create stories, but they do help in building a sense of place, and good stories can come out of that. 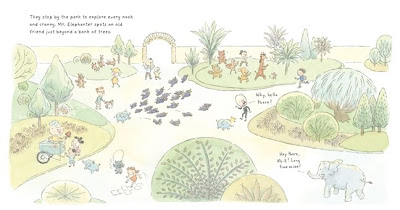