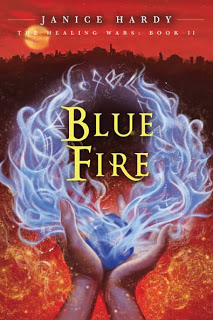 When I first started writing my middle grade fantasy, The Shifter: The Healing Wars (Balzer & Bray, 2009), I had no idea it was going to be a trilogy.

I’d never written a trilogy before, but halfway through the story I saw the bigger story arc that my protagonist, Nya, could be part of if I nudged her in that direction.

I made some notes, finished the book, and sent it off to agents with a little, “this story stands alone but could continue as a trilogy” statement at the bottom of the query.

Eight months later, I sold a trilogy. What the heck was I gonna do now?

I plowed into the second book, Blue Fire (Balzer & Bray, 2010) and made every mistake a sophomore writer can make.

I learned a lot about writing sequels from that and was better prepared for book three. After going through the process once, I have several things I’ll do differently the next time I try another trilogy.

1. Figure out the entire plot in advance.

Sure, I knew the story of all three books, but knowing book three is “about the war” doesn’t do squat when you’re trying to figure out the plot for books leading up to that war. Each book needed its own plot arc, and that plot arc needed to fit into the series arc.

They also couldn’t just be rehashes of the same basic plot from the first book. They needed to offer new story and raise the stakes.

I won’t need to know every little subplot, but understanding the big set pieces in advance will save me a ton of tears later.

2. Figure out my characters in advance.

This might be a toughy, but characters tend to slip in as stories go on. Adding five or six each book didn’t seem like that big a deal until I got to book three, then suddenly everyone was in the same book. I had dozens and dozens of characters, each with their own small subplots, and it was way too much to deal with. Trying to wrap up all those characters and subplots was maddening.

Pre-planning some characters that I can recycle each book will help eliminate that “character creep.” It’ll also make me think twice every time I start to add another character to the story.

3. Figure out my big secrets in advance.

I had characters reveal awesome secrets to me in Blue Fire that I’d had no clue about in The Shifter. So I had to figure out how to make those delicious new secrets work with what I’d already written and couldn’t change. But if I can plan my big reveals and decide where in each book they are revealed, stuff won’t sneak up on me as much and hijack my plot. Uncovering secrets is also a great way to keep readers interested, so pre-planning those will help move the plot along as well.

Naturally, I won’t know everything before I start writing, and things are always revealed as the story develops. But a little more “forward thinking” on my part will save me a lot of frustration later. And probably lead to a much better trilogy in the end.

A long-time fantasy reader, Janice Hardy always wondered about the darker side of healing. For her fantasy trilogy The Healing Wars, she tapped into her own dark side to create a world where healing was dangerous, and those with the best intentions often made the worst choices. Her books include The Shifter and Blue Fire from Balzer & Bray/Harper Collins.

She lives in Georgia with her husband, three cats and one very nervous freshwater eel.

Don’t miss her blog, The Other Side of the Story: One writer’s take on writing, querying, and publishing.

10 thoughts on “Guest Post: Janice Hardy on The Trouble With Triples”