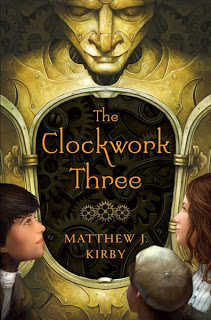 Matthew J. Kirby is the first-time author of The Clockwork Three (Scholastic, 2010). From the promotional copy:

Three ordinary children are brought together by extraordinary events. . .

Giuseppe is an orphaned street musician from Italy, who was sold by his uncle to work as a slave for an evil padrone in the U.S. But when a mysterious green violin enters his life he begins to imagine a life of freedom.

Hannah is a soft-hearted, strong-willed girl from the tenements, who supports her family as a hotel maid when tragedy strikes and her father can no longer work. She learns about a hidden treasure, which she knows will save her family — if she can find it.

And Frederick, the talented and intense clockmaker’s apprentice, seeks to learn the truth about his mother while trying to forget the nightmares of the orphanage where she left him. He is determined to build an automaton and enter the clockmakers’ guild — if only he can create a working head.

Together, the three discover they have phenomenal power when they team up as friends, and that they can overcome even the darkest of fears.

Of the two, I guess I would be considered a plunger, but a slightly apprehensive one. It’s like traveling to a place I’ve never been, where I don’t know the language or the culture. I really like to travel, and I’m always excited to go someplace new and different, but I’m also a bit nervous.

Maybe I wouldn’t be as nervous if I had a better idea of my destination, but I don’t outline in the formal sense. At most, I might jot down some ideas, some images, or snippets of dialogue that I plan to use. I do usually have some mile markers in mind, which some might think of as a kind of outline, and I guess it is. But it isn’t a map.

To continue the traveling metaphor, if a writer who does follow a strict outline has a GPS, and a map, and a satellite phone, what I have are vague directions I picked up from a stranger I met on the side of the road. And that’s the way I like it.

Of course, now that I’ve said all that, I have to admit I did outline some of The Clockwork Three though much less than people think. The book has three protagonists, each with their own separate but interlocking stories. The majority of the book I wrote without an outline, but when I hit the last three chapters I had to lay it all out and organize it. I created a spreadsheet with columns for the different plotlines so I could see where they overlapped and lined up, departing from my usual on-the-fly way of doing things to make sure I wrapped up all the loose ends how I wanted to (which also meant leaving some threads intentionally hanging in the wind). But I haven’t felt the need to do that for any of my other stories. 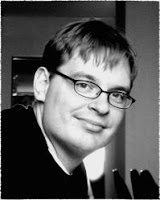 When I write, all I really need is a direction to write in. I prefer to just relax and explore, even though it might mean some wrong turns, dead ends, and heavier edits later.

But some of my favorite bits and moments of writing have come from those times where I just let my characters guide me. That’s the key, really. Having characters that can show me around. I find that if my characters live and breathe and are real to me, when I put them in a situation authentic to them and set them going, they’ll lead me out of it.

I’m represented by Stephen Fraser of the Jennifer De Chiara Literary Agency. Steve and I met at the Writing and Illustrating for Young Readers Workshop in Sandy, Utah, a few years ago. He was on the workshop faculty, and I listened to him speak a few times at different breakout sessions. He impressed me with his demeanor and his philosophy on children’s literature.

After the conference, I sent him my manuscript, and I think his exact response was, “It’s good. But it’s not great.” I took that as a rejection, but Steve encouraged me to set the manuscript aside, work on something new, and send him what I wrote next.

That something new ended up being The Clockwork Three. Steve read it and offered representation, about a year-and-a-half from the time we first met. Following a round of revisions, he sent the book out on submission, and Scholastic made an offer less than a week after receiving it.

The thing you need to remember, and the great thing about Steve, is that during that intervening year-and-a-half in which he wasn’t my agent, he nevertheless encouraged and nurtured me as a writer. His generosity with his time and expertise was one of the things that helped me decide to sign with him.

I considered other factors when making that decision, things I think every writer should ask when looking for an agent. Do they communicate with you in the way you need? Do you get along with each other? (Because the agent-writer relationship is ideally long-term.) Are they an “editorial agent,” and is that something you’re looking for? Do you agree on where you see your career going?

Steve wasn’t the only agent I considered. But he and I lined up on the answers to each of these questions, and most importantly, he is passionate about my work. I’ve always thought that your agent should be as big a fan of your book as your mom.