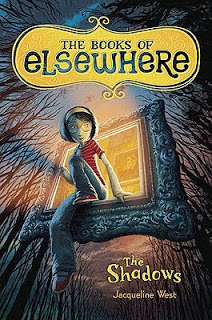 Jacqueline West is the first-time author of The Books of Elsewhere, Volume One: The Shadows (Dial, 2010). From the promotional copy:

When eleven-year-old Olive and her dippy mathematician parents move in, she knows there’s something odd about the place–not least the walls covered in strange antique paintings.

But when Olive finds a pair of old spectacles in a dusty drawer, she discovers the most peculiar thing yet: She can travel inside these paintings to a world that’s strangely quiet . . . and eerily like her own, yet Elsewhere harbors dark secrets–and Morton, an undersized boy with an outsize temper.

As she and Morton form an uneasy alliance, Olive finds herself ensnared in a plan darker and more dangerous than she could have imagined, confronting a power that wants to be rid of her by any means necessary. It’s up to Olive to save the house from the dark shadows, before the lights go out for good.

I was lucky: I grew up in a house full of books, which made it seem like it was full of other things—things like hobbits and magical stuffed animals and big friendly giants and vampire rabbits. My mother was an English teacher, and my brothers and I learned to read when we were very young, thanks to her—and to the set of colorful alphabet magnets that hung on the refrigerator door. (To this day, each letter of the alphabet has a specific color in my mind.)

My mother would even make up stories for us, usually involving me and my brothers. (I remember a saga involving an imaginary mean girl who moved onto our street and the continuing drama of a leprechaun who fell into my littlest brother’s diaper pail.) By the time I was three years old, I was a story junkie.

The corners of my favorite childhood books are worn soft from so much touching. Some of their pages are rumpled and stiff from falling in the bathtub; others have been smudged with dog drool or splattered with the pink milk from bowls of Lucky Charms.

There are certain books that I loved so much, I would get to the last page, flip to the front, and begin them again immediately. The worlds I found inside of these books were just as real to me, if not more real, than the one that existed around me.

My favorite childhood books and authors—especially those that I read again and again—practically became part of my genetic makeup.

For better or for worse, those books were the foundation for my own formation as a writer. The writers that I think had the deepest impact on me were those I began reading when I was very little; writers like A.A. Milne, Roald Dahl, and Lewis Carroll. I loved books that frightened me and books that made me laugh, and I especially loved books that did both.

A few years after learning to read to myself, I started reading aloud to my younger brothers. We’d pile onto the couch or into the backseat of the car with the latest Calvin and Hobbes collection by Bill Watterson (Andrews and McMeel, 1987-) or an installment of the Bunnicula series by James Howe (Avon, 1979 – 1987).

When I started writing The Books of Elsewhere, my intention was to write something my brothers and I would have liked when we were kids—something we would have read aloud to each other and laughed about and been a bit delightfully scared by. Writing these books has been like revisiting some of the best parts of my childhood.

My favorite fantasy works are set in the real world. I love it when unlikely things happen in places that could actually exist; it makes the ordinary, everyday world seem full of potential magic. The Hundred Acre Wood could be any little forest. Roald Dahl’s witches convene in an ordinary hotel. Calvin and Hobbes live in a very normal house in a very normal town, but their daily lives are crammed with adventure.

The setting of The Books of Elsewhere is sort of a world within a world. The outer world is an old stone house, which could exist almost anywhere in reality—and I hope that there’s at least one creepy old house that scares away trick-or-treaters and inspires morbid rumors in everyone’s hometown.

I intentionally avoided naming the town or state where the house is located, because I wanted this outer layer of the setting to feel universal. I even tried not to give away too many climate-related clues, but this is tricky to maintain, especially now that I’m writing the third volume…

In any case, this outer setting is based on memory and observation, combining a decrepit Victorian mansion in the town where I grew up with parts of my grandparents’ old house, like their cluttered attic and terrifying basement.

That setting—the old stone house—is where the whole story began. I had that house waiting in the back of my mind, and I knew I wanted to fill it with an eccentric, out-of-place, scientifically minded sort of family, who turned out to be the Dunwoodys. From there, I got to build the house in my imagination, deciding what each room and hallway and dark corner looked like.

While this outer world is concrete and limited, the inner world that exists entirely inside of the old stone house is flexible and almost infinite. The inner world, of course, is Elsewhere: the alternate reality inside of the paintings that hang on the house’s walls. 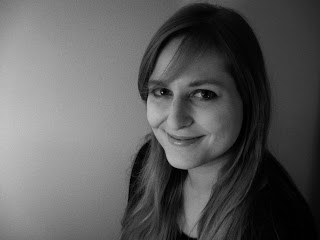 Like a lot of kids, I used to imagine that objects had a secret life—that stuffed animals sat up and started talking as soon as we left the room or that all the food in the fridge played hide-and-seek once the door was shut and the light clicked off.

I also liked to imagine that the people inside of paintings could move and speak and go on about their days when no one was watching. I think that’s where the idea of Elsewhere came from.

Constructing Elsewhere and figuring out how the paintings worked was more complicated than building the outer world. The paintings are magical, so they don’t behave according to the laws of the real world, but they have their own logic and this logic needs to be consistent.

As the plot developed, it forced me to make decisions about how it feels to climb into a painting, what paintings can do or can’t do, how things from the real world can impact the painted world, and so on.

While Olive discovered the paintings, I got to discover them, too, one by one, and to decide what sort of inner world their painter would have created.

From Indiebound: “A two-time Pushcart nominee for poetry, Jacqueline West lives in Chilton, Wisconsin. This is her first novel.”