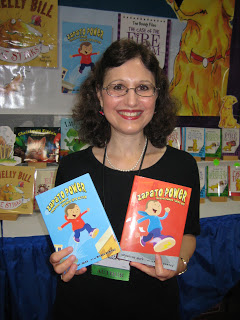 As a child, I loved warm, windy weather, just before a big rain. You could smell the moisture in the air. The trees would bend and wave their branches as if saying, “Come on!”

With the wind blowing across my face, it felt like just a little bit of speed would lift me into the air.

I had a friend named Ginger who agreed with me. We would pretend we were horses, shaking our hair as if it were a mane, and run into the wind, ready for magical wings to sprout from our backs.

Most kids entertain the fantasy of flying at some time in their childhoods. Many also dream of having superpowers. What if it actually happened? How would it change your life? Could you still be an ordinary kid?

That was my question as I began Zapato Power: Freddie Ramos Takes Off, illustrated by Miguel Benitez (Whitman, 2010). I was working as an elementary school librarian and fielding a frequent request: “Do you have a book with a superhero?”

Many of my students were learning English as a second language. The books they wanted to read often had too much text for them to manage. So I wondered if it was possible to write an easy-to-read chapter book for them.

When it comes to books, an author-librarian is like a mother. If a child wants brownies and there are none in the house, many mothers are motivated to bake. Likewise, when I heard a repeated request from my students, I was motivated to write.

So I imagined one of my good-natured, lovable students with superpowers. How would it enhance or complicate his life?

In Zapato Power: Freddie Ramos Takes Off, Freddie receives a mysterious box with super-powered purple sneakers. They give him the amazing ability to race the metro train and win. The next morning, he goes to school, armed with super speed, and ready to be a hero. But it’s not that easy, as Freddie relates:

“I wanted to save a kid from a burning building or catch a criminal. Saving a cat would have been okay, too. But it’s not that easy to be a hero when you go to elementary school. No one falls out of high windows. We don’t even have a second story at Starwood Elementary. No one seems to need hero stuff. They need left-behind lunches and library books.”

Most of us like the idea of a magical power, but we’re not quite willing to give up our real lives to have it. The conflict between getting the fantasy you wish for and maintaining a normal life intrigues me.

That’s why I knew that Freddie would be a superhero living in an apartment building similar to the homes of my students.

In the first book of the Zapato Power series, Freddie Ramos Takes Off, Freddie receives his special powers. 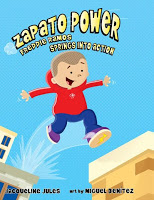 In the second book, Freddie Ramos Springs into Action, Freddie must learn how to control his powers. How do you play basketball with your friends or participate in gym if you have super speed?

The third book in the series, scheduled for spring 2011, Freddie Ramos Zooms to the Rescue, gives Freddie the opportunity to use his powers for a public rescue.

But in all three books, he must deal with the joy and the frustration of having superpowers in an ordinary world.

How would your life change if you suddenly had the ability to fly?