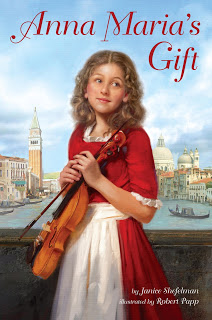 Much to my delight, Cynthia asked me to write something about the research I did for my latest historical novel for young readers, Anna Maria’s Gift (Random House, 2010). Delight because research is something I dearly love, especially of the past. To learn about the past and bring it alive with imagination is my passion.

What would the ruins of Knossos on Crete be without archaeologist Sir Arthur Evans’ imaginative reconstruction based on his research? Dead ruins.

My current project is to bring the people and the palace of Knossos back to life in a historical novel entitled Ariadne’s Choice, a story based on the myth of the Minotaur. Walking through and pondering those partially restored ruins took me back 3,000 years to the time of King Minos, Queen Pasiphae, and their daughter Ariadne. 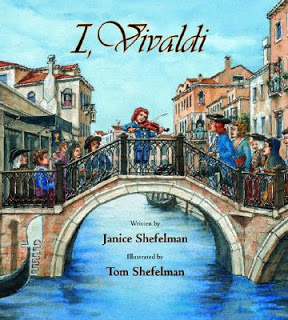 As for Anna Maria’s Gift, living in Venice took me back to the 18th Century, even without imagination since the city has changed little since then.

Research began with an earlier picture book, I, Vivaldi, illustrated by my husband Tom Shefelman (Eerdmans, 2008). Tom and I both love baroque music and, most of all, Vivaldi’s music. He lived in our favorite city in the world, Venice. So, it was inevitable that we write and illustrate a biography of the man who wrote such passionate music and lived in the fantasy called Venice.

We made several extended visits and stayed in a palazzo in the square of San Giovanni in Bragora where Antonio Vivaldi was born and lived as a child. Tom played kickball with the neighborhood kids, just as Antonio longed to do but could not because of his “chest constriction.” All he could do was play the violin with the fierceness of playing ball.

When I read that Vivaldi had taught orphan girls at the Pietà in Venice, I knew there was another story to be told. Especially when I found out that he turned those girls into an orchestra known all over Europe. Now, to be an orphan, the parents must die. Anna Maria’s mother dies before the story opens, but her father — ah, there is the tragic Chapter One when Papa lies dying of consumption.

I decided to begin the story in Cremona, a city in northern Italy where there is an ancient tradition of making the finest violins the world has ever known. Why Cremona? Because I wanted Anna Maria’s father to be one of those violin makers. 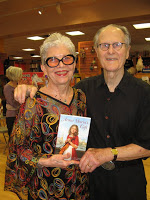 So, Tom and I traveled to Cremona, learned something of the craft of making violins and visited the home of Antonio Stradivari, who made the incredible Stradivarious instruments.

His custom was to keep an unvarnished violin in his bedroom for a month before varnishing it. He believed that while he slept his soul entered the violin. And he should know!

Thus, evolved the idea that Papa’s final gift to Anna Maria would be a violin that held his soul and voice.

Can you imagine what happens later when that violin is stolen? No, you can’t. That is why you must read Anna Maria’s Gift no matter how old you are.

In the last photo, Janice and Tom show off Anna Maria’s Gift at BookPeople in Austin.