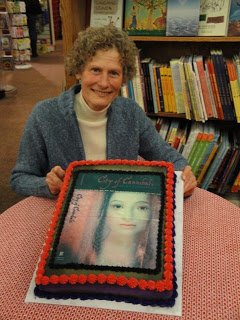 Ricki Thompson is the first-time author of City of Cannibals (Front Street, 2010). From the promotional copy:

“You will not show yourself to the boy.”

“Or venture past your mother’s cross.”

He gripped his spoon as if it were a knife. “You know why it is called the City of Cannibals.”

Of course Dell knows. But here on the mountain, all she has is her embittered family—a brother who torments her, an auntie who berates her, and a father who’s a drunk.

And once she arrives in the city—if the cannibals don’t eat her first—surely the Brown Boy will help her. Not that she’s ever spoken to him, but she has seen him leave sacks of supplies for her family. Dell has waited long enough. She escapes to the city.

The City of Cannibals is indeed fraught with dangers and surprises. The Brown Boy, Ronaldo, seems to love the fishmonger’s daughter, and he’s about to become a Benedictine monk. John the Joiner asks Dell whether she’s signed the Oath of Allegiance to the king, and if she will deliver secret letters to the Benedictine monastery. Worrisome messages about sheep and wolves.

Dell has good reason not to sign the Oath. So does Ronaldo. But the king’s command is clear: every subject must sign or die a traitor’s death. If Dell defies the king, can she save herself and Ronaldo?

In writing your story, did you ever find yourself concerned with how to best approach “edgy” behavior on the part of your characters? If so, what were your thoughts, and what did you conclude? 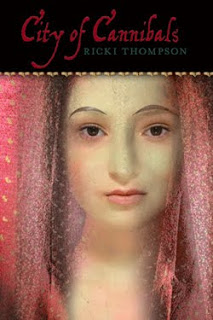 I have both a philosophical and a practical response to that question. Let me start with the practical.

City of Cannibals has one scene of sexual intimacy. While I was writing the novel, I lay awake many a night, wondering if the scene should lead up to a kiss or to sexual intercourse. Sex, I finally decided.

Then my gifted editor, Joy Neaves, read the manuscript. “Are you sure you want your characters to have sex?” she asked.

First, I mentally compared City of Cannibals to my next novel, Seduction. Seduction is about a girl who gets involved in stripping and prostitution. Does that story need to include sex? It sure does. But City of Cannibals was literally another story. So I asked myself some questions.

• Did the scene need to be there at all? If I removed the scene, would it effect the story? “Yes,” I said.

• Would my characters have shared a kiss or had sex? “Not sure.”

• What is the story about? Partly it’s about the blossoming—not the consummation—of sexual love. City of Cannibals is already a complicated story that makes demands on the reader. Did that story need a kiss or sex? “A kiss,” I concluded.

My process didn’t discuss the issue of readership or address the question: “Edgy” to whom? The characters in the story? The teen reader? The adult librarian?

Worrying about these things will make me crazy. My priority as a writer is to preserve the integrity of the story, and if integrity means writing “edgy,” then so be it.

“Edgy” behavior is a behavior that causes discomfort to the culture in power. It pushes the boundaries (the edges) of what is acceptable and safe. “Edgy” behavior can get you grounded for a month, thrown into detox, burned at the stake.

In the 1960s, cohabiting with your lover was “edgy” behavior. A few decades later, cohabiting became acceptable, and “edgy” meant adorning yourself with tattoos and pierced genitals.

Throughout the generations, sex, drugs, music, and fashion all seem to have great potentials for discomfiting the mainstream. And each generation labels different behaviors “edgy.”

Teen music and dance, for example, have often been viewed as “edgy.” During the 1940s in Europe, swing was no exception. Hitler despised swing because it threatened everything he stood for. The music and movements of swing were loose and easy—the opposite of Nazism, which demanded absolute order and control.

Hitler tried ferociously to control swing. He replaced its lyrics with racist ones and banned the sale of U.S. records in Nazi-occupied countries. Hitler’s tactics didn’t work. The more he repressed swing, the more popular it became. The “edgy” dance was so powerful, it challenged an entire political system. No wonder “edgy” behavior makes people uncomfortable.

As an artist, I have a responsibility to speak the truth. And the truth is, teenagers live in an “edgy” place. What could be edgier than attempting to balance on the tenuous cusp of adulthood? When teens aren’t engaging in “edgy” behavior, they’re likely thinking, fantasizing, or reading about it. How can I write for and about teens if I don’t write “edgy?”

But there’s another truth about “edgy” behavior—about any behavior, for that matter. Actions have consequences. As a writer, I have a responsibility to explore the consequences, positive and negative, of my characters’ behaviors.

If my character chooses to pierce his tongue, what will the consequences be for him? Pleasure? Infection? Admiration from his peers? Anger from his parents? All of the above?

In other words, if I write about “edgy” behavior, then I have to pursue its ramifications.

There’s another reason I write “edgy.” Although I may not live in an “edgy” place, I strive to write from one. In his essay, “Play and Theory of the Duende,” the poet, Federico Garcia Lorca, says that the artist possessed by Duende exists on the edge, or cusp of the abyss. The solid ground of ordered life lies on one side, dark chaos on the other. The artist’s calling is to balance on the cusp. To honor order, but not be rigidified by it. To embrace chaos but not be consumed by it. It’s my challenge as a writer to balance on the edge, illuminating the darkness and celebrating the light. 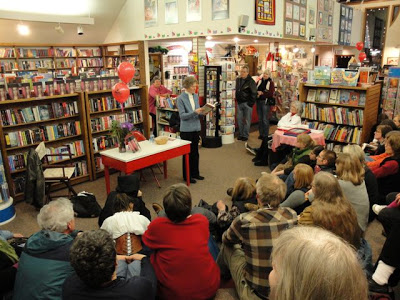 As someone with an MFA in Writing for Children and Young adults, how did your education help you advance in your craft? What advice do you have for other MFA students or graduates in making the transition between school and publishing as a business?

Not everyone has the time or opportunity to enter an MFA program. I hope my comments will be helpful to self-taught learners as well as MFA graduates.

Before answering the question of how education advanced my craft, I’d like to first address the question of whether education can advance craft. After all, writing is a mysterious process in which plots and characters and settings mystically take shape in the author’s dreams, right?

Can such a spooky process be taught?

My answer is a qualified but passionate yes.

I completed my MFA in 2006. One day, about half way through the program, I approached my mentor, the late Norma Fox Mazer. Norma was an extraordinary writer and self-taught master of craft.

Writing required genius, I informed her, and I didn’t have it. Perhaps the time had come for me to quit the program.

Norma responded with soft-spoken patience. “Writing is a series of skills,” she said. “Except for voice, they can all be learned.”

Norma wasn’t suggesting that studying craft would turn me into a genius, or even an accomplished writer. She was simply stating that writing isn’t all mystery. Craft can be learned.

If we believe Norma’s claim that education can advance craft, the next question is how?

For me, the MFA program greatly accelerated my learning. The program was intense and demanding. We heard readings by faculty, students, and visiting writers. We listened to lectures on craft and engaged in private discussions. But the heart of the program was the one-on-one mentoring by a faculty coach and the critiquing that occurred in the workshops. My mentors and workshop colleagues spoke specifically to my work.

Imagine you’re a tennis player and you want to improve your game. You might read books about tennis or listen to the masters talk about it. But you’d probably learn faster with a coach who could adjust your alignment and fine-tune your game one stroke at a time.

Craft is the manipulation of story elements: plot, characterization, setting, dialogue, theme, point of view, imagistic language, voice. Craft is essential. It holds the story together. But what holds the writer together? If the writer loses confidence and quits writing, craft techniques are useless.

I know, I know, writing is a solitary act. A writer is a lone horseman, trotting off across the barren plain, a pistol in his holster, a cloud of dust enveloping him. Yes, sometimes writing is like that. The writer galumps along with only her pen and barren page, surrounded by a cloud of unknowing. Many writers choose to live and work alone, and that’s great.

But I can’t. Left alone, I sabotage myself, shoot myself in the foot, so to speak. I convince myself that I should be doing something useful, like organizing the closet.

Or something that matters, like picking up litter. I compare myself to Shakespeare and realize that everything worth saying has already been said and said better than I ever could.

In short, I give up.

The world of publishing is a brutal one, not because editors, agents, and publishers are heartless people. On the contrary. But they have budgets. Most often they have to say “no.”

Community can help us ride the waves of rejection. An MFA program offers students the beginnings of community. But with or without an MFA, a writer can still seek out friends who will understand, nurture, and support them in the journey.

Read an interview with editor Joy Neaves by Karen Cotton from the Rocky Mountain Chapter of the Society of Children’s Book Writers and Illustrators (PDF).