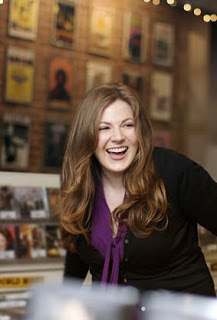 Elizabeth Eulberg is the first-time author of The Lonely Hearts Club (Point/Scholastic, 2010). From the promotional copy:

Love is all you need…or is it?

Penny is sick of boys and sick of dating, so she vows: No more. She’s had one too many bad dates, and has been hurt by one too many bad boys. It’s a personal choice…and soon everybody wants to know about it. It seems that Penny’s not the only girl who’s tired of the way girls change themselves (most of the time for the worse) in order to get their guys…or the way their guys don’t really care about them.

I did a lot of drafts of The Lonely Hearts Club before it even went to a publisher. My first draft was awful. I didn’t know what I was doing, and I made a lot of mistakes. I started writing without an outline and a clear understanding of the characters. I basically sat down and tried to figure out what was going to happen next. That works for some people, but not me.

I wrote four drafts of the manuscript before I sent it to an agent. In those four drafts, I spent a lot of time figuring out the plot. Mostly expanding different plot lines (the first draft was very light). I also didn’t fully have the characters figured out, so that was a struggle.

Then I got the best piece of advice. A friend of mine (who happens to be an editor) said, “You need to spend a day with each of your characters and really get to know them. What is in their closet? What wouldn’t they want anybody to know?”

One of the biggest misconceptions I had was that once it got sent to an agent, I would be so close to getting a book contract. I ended up doing around seven drafts for my agent. I remember thinking at one point that it would be the last draft and my agent called and said, “You’re so close. But that secret that comes out on page 100? That should just come out right at the very beginning, in the first chapter.”

I’m not going to lie, I broke down in tears thinking about what a major rewrite that was going to be. But once I started to work on it, I realized she was completely right and it made the book so much better.

After that revelation, we worked on tightening up the plot and making the flow better. I was starting to get frustrated because I thought that I just couldn’t keep revising. I didn’t see the light at the end of the tunnel. I was finishing an edit one evening where I broke down and thought I couldn’t do it. I was about to give up. I had been working on editing the book for a few years at this point, and I really did come “this close” to throwing in the towel.

But I did decide to get up and finish the manuscript. Ironically enough, that was the manuscript that we ended up sending out to publishers. Here I almost packed it in, and three days later, my agent let me know that I finally did it and she was putting together a list of potential publishers. 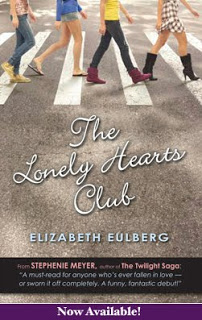 When I started working with my editor at Scholastic (the fabulous David Levithan), we focused on the beginning the most. We did about three different rounds on the first fifty pages, making sure the main character’s motives on forming the Lonely Hearts Club rang true. He had very direct and detailed suggestions, which is what I really needed at that point. The rest of the novel only needed a little bit of revision, compared to the beginning.

I worked on editing the book so much that I was in shock when I was told that it was done. At that point, I kept wanting to tinker with it. After so many years of wanting to be done editing, I really had a hard time letting it go!

Despite having a few mini-breakdowns in my very long process (about five years from idea to finished manuscript), I really enjoy editing. I know a lot of people don’t, but I see editing as a way to improve the book. I’m open to all (thoughtful) criticism to writing and story. I’m new to this so I want to become better with each draft. Nobody is perfect and no book is perfect, so if there is a way that I can improve, I welcome it.

Being able to balance a full-time job and writing has required a lot of trial and error on my part. I sometimes have to travel for my job, so there are huge chunks of time where I’m not able to write or edit. (I’d like to think that is the reason The Lonely Hearts Club took six years, but it mostly was my lack of a plan going in.)

I personally can’t write at night when I’m done working my day job. I’m too tired and burned out from being at a desk all day.

I reserve the weekends to write. When I was working on The Lonely Hearts Club edit, I blocked off weekends and would spend 12-14 hours a day working on the edit. I would think about what I was going to write during the week – at the gym, in the shower, commuting into the city – so when I sat down to write, I knew exactly what I was going to do. I’ll always have a goal each day, either chapters to go through or word count, if I wasn’t on an editor/agent driven deadline.

While I finally got down a writing schedule that worked for me, I had to start promoting The Lonely Hearts Club.

Fortunately, the book came out during my Christmas vacation, so I was able to work on the various blogs and interviews that I needed to do during my break. But once the break was over, I did need to start doing some “author work” during the week. I’d set aside my lunch break or try to write at night. If possible, I’d wait until the weekend, but a lot of times I needed to make time.

My day job is in publicity, so I understand how important it is to do whatever you can to promote a book. No matter how crazy my schedule got, I knew that every interview request was important and did whatever I had to do to finish the blogs or interviews on time.

Everything regarding my writing career is a huge priority for me. I keep a detailed schedule, including weekends, to work on my next project. It is very easy for me to get distracted (hello, YouTube!), so I need to set goals and keep a checklist of what needs to get done and when.

Even though there were a few hairy weeks earlier in the year, I know how lucky I am to be a published author and I also remember all that struggling I did to get the manuscript in shape. I can sit here on the other side of things and say with 100% certainty that every lost weekend and crying spell was worth it.

If writing is important to you and you are passionate about it, you will find a way to make it work for you. Just keep going!