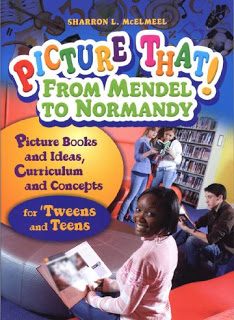 Several years ago, I was a high school librarian, and once teachers got to know of my knowledge of picture books and curriculum connections, I was often requested to visit their classes.

Social Studies classes often requested one of my Dr. Seuss readings – my favorite was Yertle the Turtle (Random House, 1958) and the World War II connection. Science classes hosted readings of Franklyn Branley’s Journey Into a Black Hole (HarperCollins, 1998) and books about the environment and the rain forest, for example. And readings of Beatrix Potter, A Tale of Peter Rabbit (Frederick Warne, 1902) and A Tale of Benjamin Bunny (Frederick Warne, 1904), helped to drive home the concept of sequels.

Other favorite readings were developed, but soon I moved back to the elementary setting where picture books did not need to be sold. But more and more, I felt that teachers in the secondary schools were missing a great resource. 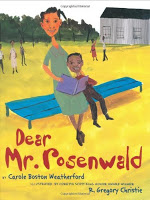 One day I read Carole Boston Weatherford‘s verse narrative, Dear Mr. Rosenwald, illustrated by R. Gregory Christie (Scholastic, 2006). The great potential for the use of picture books with older readers—readers who would have a capacity for research and more reading on a historical or scientific topic—came flooding into my mind. Who knew that Julius Rosenwald had actually been responsible for establishing more libraries than Andrew Carnegie?

Weatherford’s book had piqued my interest to learn more about the Rosenwald schools and the libraries he placed across fifteen southern states. Through research that followed, I discovered that the omission of his name from many history books probably revolves around the effects that result from being a non-perpetual trusts (rather than a perpetual trust), and more subtly, the fact that his philanthropy benefited, for the most part, African-Americans and the poor communities in the South.

Learning from curiosity stimulated from a 32-page picture book that seemed to be just a story of a little girl growing up in the South in the 1920s.

That’s what I had done in those high school classrooms several years ago, and when given an opportunity to do that same thing in a book, I was thrilled. What fun I was going to have.

Connecting the dots, became the premise for my 2009 book, Picture That! From Mendel to Normandy: Picture Books and Ideas, Curriculum and Connections, for ‘Tweens and Teens from Libraries Unlimited/ABC-CLIO.

What fun I had searching out recent picture books that would spark interest in more learning.

I was introduced to Ira Hayes, Hank Greenberg, Bessie Smith, George Crum, Isaac Murphy – all with stories that provide the weft and the warp for the fabric of our society.

I made my own connections to family history and the Civil War’s Andersonville prison.

When the book, Picture That! From Mendel to Normandy: Picture Books and Ideas, Curriculum and Concepts, for ‘Tweens and Teens was released, I was pleased that the very colorful cover was a reflection, of sorts, to the tapestry I was trying to reflect.

I was able to slip a few references to picture books for older readers into two other books published in 2009. The concept of picture books in middle/high school was Best Teen Reads: 2010 and in a co-authored title Young Adult Literature and Multimedia: A Quick Guide 2010. 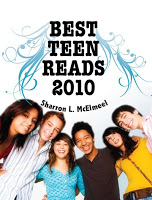 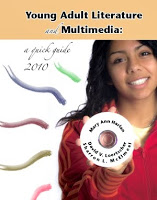 If it seems that I am on a campaign to put picture books into places they have not previously been, you would be correct. This past holiday, I gave my high-school-biology-teaching daughter her own personal copy of Cheryl Bardoe’s Gregor Mendel: The Friar Who Grew Peas (Abrams, 2006). I think she read it to her class in the last week or two. The word is spreading. 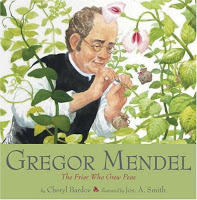 From the author’s website: “Sharron L. McElmeel is a renowned author and an instructor of Children’s and Young Adult Literature at University of Wisconsin-Stout. A literacy consultant and columnist, she was named Iowa Reading Teacher of the Year in 1987, and in 2004 she received the Iowa Reading Association’s State Literacy Award in recognition of her lifelong efforts to build literacy and literature appreciation in the community. Her columns appear regularly in Library Sparks.”