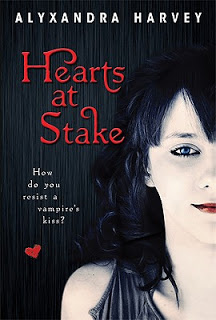 Alyxandra Harvey is the first-time author of The Drake Chronicles—Hearts At Stake (My Love Lies Bleeding in UK)(Dec., 2009-Jan., 2010); Blood Feud (June, 2010) and Out for Blood (Nov. 2010), all from Bloomsbury Walker Books. From the promotional copy:

On Solange’s sixteenth birthday, she is going to wake up dead. As if that’s not bad enough, she also has to outwit her seven overprotective older brothers, avoid the politics involved with being the only daughter born to an ancient vampire dynasty, and elude Kieran Black—agent of an anti-vampire league who is searching for his father’s killer and is intent on staking Solange and her entire family.

Luckily, she has her own secret weapon—her human best friend Lucy—who is willing to defend Solange’s right to a normal life, whether she’s being smothered by her well-intentioned brothers or abducted by a power-hungry queen.

Two unlikely alliances are formed in a race to save Solange’s eternal life—Lucy and Solange’s brother Nicholas, and Solange and Kieran Black—in a dual romance that is guaranteed to jump start any romance-lover’s heart.

Quite often, my characters just pop into my head. They have a basic shape and voice, but it’s like I need glasses to really focus on their individual details.

First, I find a name. I have lots of baby name books, and I keep lists of names I like as I come across them. I’ve also been known to out and out steal from movie credits!

I also keep a notebook for each novel I write, and it’s filled with lists of characters’ eye colour, hair colour, favourite band, book and food… I don’t necessarily know all of this information when I first start, it is revealed to me as I go along.

But my favourite way of getting to know a book and a character is through collage. You don’t need any particular artistic talent, just a few magazines and a glue stick. And I find it frees me up and gives me a different viewpoint. Imagery and certain colours, or bits of poetry all contribute to the “feel” of any given character. There’s something instinctive and subconscious about this process which appeals to me.

Sometimes characters also have a “theme song.” For Hearts At Stake and the main protagonist Solange Drake, this song was “Killing Moon” by Echo and the Bunnymen.

Hearts at Stake started with an image I had of a girl and a car full of her many brothers driving up to whisk her away. I knew she was in danger, but now how or why.

So I wrote the story to find out.

Eventually, I realized I wanted to loosely retell the Snow White fairy tale but in the vampire YA genre. I had Solange’s basic details that way: black hair, pale skin and red lips. But I didn’t really get to know her until I got to know her family. She is so overprotected because of vampire politics that she feels smothered and beloved all at the same time. She is just discovering who she is as a person when she is forced through the bloodchange into a vampire…if she can survive long enough, that is.

Another defining aspect for the characters in this book is their friendships with others. The family you make for yourself is just as important as the family you’re born with. And for Solange Drake, that’s Lucy Hamilton.

Lucy was fun to write because she’s reckless and snarky. She doesn’t really have a mute button, and she tends to act before she thinks. Her parents are pacifists, but she definitely has a violent streak!

Since both characters spoke to me so strongly that I chose to use both of their perspectives, in alternating chapters. I didn’t want to be limited to one part of the story. I wanted to explore both the vampires and the humans and the way they interact. And often they hijacked the plot for their own purposes! 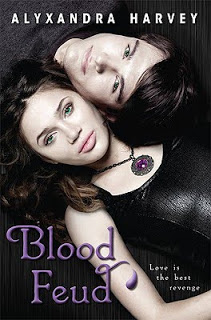 I have always been a reader. When everyone else was in love with actors and musicians, I was in love with literary characters or dead poets. I’ve cultivated very satisfying crushes on Robin Hood, John Keats, Mr. Rochester and, of course, Mr. Darcy.

In high school, I started to read fantasy novels which eventually led me to paranormal and urban fantasy. But at first I was a terrible snob. I refused to read any modern fantasy. If it didn’t happen in some crumbling castle, I wanted nothing to do with it!

Tanya Huff‘s Blood Ties series whet my appetite in high school as my first literary introduction to vampires and werewolves and supernatural creatures. I adored her books; they were snarky and fun and took place in Toronto, where I lived. My best friend and I used to trade them back and forth, writing each other notes about the characters in the margins.

And then in university I discovered Charles de Lint. That was it. He finalized my conversion with a single book: Memory and Dream (1994).

Keep in mind that urban fantasy meant something different back in the 90s. It was more magical folkloric realism (Charles de Lint, Emma Bull, Terri Windling…) than the detective/action/horror type books that make up the genre now. In fact, Terri Windling’s The Wood Wife (2003) remains my favourite book to this day. Some other favourites now also include Solstice Wood by Patricia A. McKillip (2006) and Guy Gavriel Kay‘s Ysabel (2007).

What I love about this genre is the braiding together of myth and history and magic. It has the flavour of old fairy tales but with more modern sensibilities. It’s the beauty of the rose, the blood on a thorn and the girl passed out in the castle behind the briars. It has so many layers. The mystery of it helps us to look beneath the surface, which is always a valuable tool. And (especially now) the girls almost always kick butt!

And never forget, it’s only fairly recently that paranormal creatures are shelved in the fantasy section. They used to be a real concern, as real as choosing which crops to plant, how to avoid the plague, and who you were going to marry.

Alyxandra “studied creative writing and literature at York University and has had her poetry published in several magazines. When not writing, she is a belly dancer and jewelrymaker. She lives in Ontario, with her husband, hawk, and two dogs.”