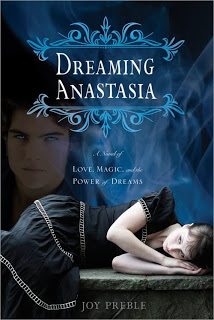 Joy Preble is the first-time author of Dreaming Anastasia (Sourcebooks, 2009). From the promotional copy:

Anastasia Romanov thought she would never feel more alone than when the gunfire started and her family began to fall around her. Surely the bullets would come for her next. But they didn’t.

Instead, two gnarled old hands reached for her. When she wakes up she discovers that she is in the ancient hut of the witch Baba Yaga, and that some things are worse than being dead.

In modern-day Chicago, Anne doesn’t know much about Russian history. She is more concerned about getting into a good college—until the dreams start. She is somewhere else. She is someone else. And she is sharing a small room with a very old woman.

The vivid dreams startle her, but not until a handsome stranger offers to explain them does she realize her life is going to change forever. She is the only one who can save Anastasia. But, Anastasia is having her own dreams…

Not surprisingly, I devoured books as a child. I was a bookish little girl–so much so that my parents eventually gave up trying to stop me from reading at the dinner table and just let me bring a book to sit next to me or in my lap at all times. (That habit has stuck – I honestly feel a little ill at ease if I’m eating without something to read)

As for my reading tastes, I was pretty much an omnivore; fiction, biography, back of the cereal box…it didn’t much matter.

That being said, I am not at all surprised that my muse delivered the seeds for Dreaming Anastasia into my brain as a somewhat cross genre fantasy/romance/alternate history/grrl power-ish reverse fairy tale.

It is no surprise that I grew up wanting my female heroes strong and funny and willing to do what it takes to get the job done.

And okay, I know this question doesn’t really ask this, but I also have to say that the potent combination of all of those works added to the more recent cultural influence of The Almighty Whedonverse absolutely assured that I would create a first novel that has many powerful female characters, including but not limited to an ordinary high school junior, a not-so-dead princess, and even Baba Yaga, the legendary Russian folklore witch.

I think any novel evolves over the course of its drafts. Or at least this one did!

Thematically, I think that once I’d created my protagonist Anne–because it was her voice that actually came to me first–I knew that at the very least I’d be writing the classic journey tale.

Girl thinks her life is ordinary; handsome stranger tells her “nope, not so much ordinary.” More crazy power with ensuing wackiness. Girl embarks on mission to save someone, and stuff happens that she never quite expected.

That was probably always my plan in one form or another–that I would take this girl and throw fantastic obstacles at her and a really hot guy and all sorts of other stuff and see how she reacts. But beyond that, a couple of things really did evolve in unexpected ways for me.

One was that once you resolve to write a story about the possibility of changing history, you realize that to some degree you’re writing a form of Mary Shelley‘s Frankenstein (1818, 1831). That is–just because you might be able to do something (build your own man; stop a seventeen-year-old girl from being murdered)–doesn’t necessarily mean you should. And the slippery moral slope that results from the attempt has this huge ripple effect.

So suddenly, I had a story that wasn’t just playful “what if.” It was darker and more serious and more thoughtful.

And certainly that is something very universal, whether we’re talking about bio-ethical issues such as stem-cell usage or transplants or cloning, or more fanciful stuff like what if Anastasia really wasn’t quite so dead.

The other theme that evolved as I began to weave in Russian folkloric elements was this amazing duality of my characters. Particularly the witch Baba Yaga, both in classic storytelling and in Dreaming Anastasia, is a character who is very hard to pin down.

As Anne’s friend Tess actually asks somewhere in the middle of the story, “Is she a good witch or a bad witch?” Honestly, she’s a little of both, which is about all I’ll give away.

Again, I think that has very universal application. We live in complicated times. Lots of gray areas. And I loved that I was able to play with that in many, many ways during the course of the story, both with my good guys and my villains.